:: Fresh/Sleeping Bag Records
** RapReviews "Back to the Lab" series **
as reviewed by Steve 'Flash' Juon 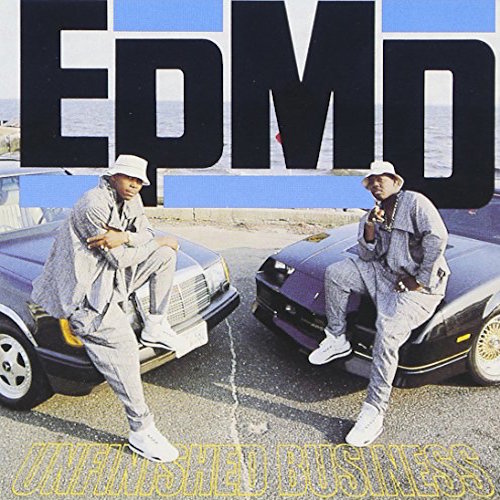 It's not easy for me to be objective about EPMD. When people pose the "stranded on a desert island" question, I always put both "Strictly Business" and "Business As Usual" on the short list of albums I just couldn't live without. I'd also need a solar powered boombox because presumably I wouldn't have a lifetime supply of D cell batteries but that's neither here nor there. The more intriguing question might be why I always overlook their second album "Unfinished Business." It's not out of any lack of affection for the album or the tracks on it. In fact the first time I heard DMX's "Get at Me Dog" I was actually OFFENDED that he'd jack the same B.T. Express track EPMD used for "Get the Bozack." To me they had some nebulous undefined "right of first usage" and anybody who tried to use it afterward could go and do exactly what Erick and Parrish suggest all "nickel dime suckers" do.

An older and (slightly) more mature Flash realizes no such "right of first usage" exists - anybody can sample what they want from whoever they want provided they pay the clearance fee. Perhaps this is an issue we can settle with Who Sampled It Better in the future. In the meantime EPMD's self-produced track (most likely done by Erick Sermon specifically) is still to me the one definitive jack. It's just one of many songs that I heard on this album that became "definitive" to me when I heard them. Take "So What Cha Sayin" for example - a typically EPMD smorgasbord of sampling which takes the drums from Soul II Soul's "Fairplay," the funk of B.T. Express' "If It Don't Turn You On" and Funkadelic's "One Nation Under a Groove," and even a small snippet of P.E.'s "Public Enemy No. 1" and combined them all together into what I consider to be an unquestionable hip-hop classic. The opening line sets the tone: "The importance of a year, yeah we're back to work/I took time off, while other rappers got jerked." Erick and Parrish believed in QUALITY over QUANTITY and this is some quality head nodding boom bap vintage hip-hop. There is no shortage of classic memorable tracks on "Unfinished Business." One of my favorites back in the day and still today is the incredibly mellow "Please Listen to My Demo." To the soft strains of "Riding High" by Faze-O, EPMD wax poetic about their struggles to catch a break in the record business. It's value these days has been increased by the fact it's now a historical artifact. The idea of having to hustle to get your demo tape heard by record industry executives is as archaic as the cassette tape itself. These days everything is digital and if there isn't an interested label you just put it on Bandcamp and sell it yourself. Back in the 1980's though you weren't able to play music on the internet though if you even had it at all. That was a pre-web browser, pre-MP3 era where everything was done in TEXT. "Getting on" was a serious struggle but one EPMD don't seem pissed to have gone through. So many songs on "Unfinished Business" are personal favorites that it seems like an injustice to mention one and not the others. I love the gangster swagger of "The Big Payback," the funky finale "It Wasn't Me, It Was the Fame" complete with Davie Bowie (R.I.P.) sample, the self-referential "Strictly Snappin' Necks" with its prototypical 1980's drum beats and production, and even the often reviled house/club track "You Had Too Much to Drink" is special to me. The latter may be influenced by the fact I saw the accompanying music video at a young age, and ever since then I've been making "that stuff tastes like fruit punch" jokes to confused onlookers who have NO idea what the hell I'm talking about. I could make a long story short and say "this is an EPMD classic too -- case closed." It is a classic and if you have a collection of "greatest rap albums of the 1980's" then this 1989 banger definitely deserves to be in it. The problem with those "desert island" questions though is that it always imagines you should have a very small list of albums anywhere from 10-25. As such I can't put an album that I personally ranked at an 8.5 above ones that I've ALREADY ranked 9 and up. Their debut album was landmark and their third album is an absolute must own while "Unfinished Business" is literally that -- the things they didn't have time to do when they started out. As such there's some material that got left on the cutting room floor on "Strictly Business" and perhaps should have remained there. "Jane II" is one of the weakest entries in the entire "Jane" series. It's not BAD -- it's just not GREAT. Even if you can forgive "You Had Too Much to Drink" the way I do, it's much harder to forgive the forgettable "It's Time 2 Party." It feels like a song forced on them by the same executives talked about in "Please Listen to My Demo," probably after promising them a box of Newports and Puma sweats. "Who's Booty" is an average EPMD song, and given the strength of their catalogue "average" doesn't make it to the island. Neither does this album. Since you're probably not living on a deserted island if you have the internet and electricity to read this review though you should DEFINITELY get yourself a physical or digital copy post haste.