Daddy-O :: You Can Be a Daddy, But Never Daddy-O

:: Island Records
** RapReviews "Back to the Lab" series **
as reviewed by Steve 'Flash' Juon 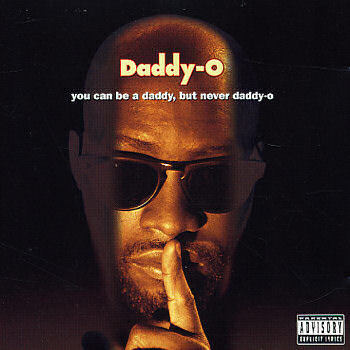 "So now you think you know me; and maybe you remember
I was in a group and we had six members
We freaked +Faye+, and saw +Sally+ walkin
Funked with +Susie+ and had the +Jazz Talkin+
But now it's kinda different, rap is gettin TRICKY
Gettin all commercial like watchin Mork and MINDY
Niggaz writin rhymes - thinkin of the video
but even a good video don't make a good song do it? (NO!)"

Through no fault of his own Glenn 'Daddy-O' Bolton has become an overlooked and damn near forgotten footnote in hip-hop. That's not to say his group Stetsasonic is forgotten though. They are frequently cited as "hip-hop's first live band" in major publications and rap blogs, and for a stretch from the mid-1980's to early 1990's, they were in the upper echelons of all rap groups in the game. You know the old saying - all good things come to an end - and the group disbanded after their third album "Blood, Sweat & No Tears" in 1991.

In the wake of Stet's demise Prince Paul had already made his name as a producer, so not much changed for him. Both Paul and Frukwan went on to success as Gravediggaz, but other than Daddy-O the rest wound up out of the music spotlight. The Odad wasn't going away without a fight, but his solo album for Island Records tanked commercially, and he refocused his efforts on producing and discovering talent for MCA and Motown respectively. Today he's rarely mentioned outside of "Whatever happened to..." conversations on social media outlets.

Thankfully albums like "You Can Be a Daddy, But Never Daddy-O" live on in my heart thanks my college years in the early 1990's. My CD still has a $3 price tag from the bargain bin I bought it out of, with a hole punched in the back cover that was SUPPOSED to dissuade record stores from reselling promo copies of albums (but never did). It doesn't sell for much more than that 20 years later, but it still feels like gold in my hands. You almost wouldn't know it exists if you trusted the mainstream sources - there's no Wikipedia entry for this seminal album and only one music video still exists - "Flowin In File."

"Never has it been so sweet to your ear
So lend it here and let go your fear
And give a green light to the man on the mic
And keep this beat cause it's just my type
And I'll ride the rhythm like a black cowboy
And I'ma get busy for ya all to enjoy
Whether dancefloor jeep or the comfort of your home
I'm kickin somethin out your back that rhymes with comb
Flippin the script, because I used to be with Stet
But when shit got hec', had to step and keep the rep
Like a forty ounce brew, leave it out it gets flat
So I'm comin freely in ninety-three with the fat"

The self-produced song was an odd choice for a single. Daddy-O made his presence known on tracks with a vocally aggressive and distinctive style, but for "Flowin In File" he choose to speak in an uncharacteristically hushed and mellow tone to show off his "new style." He addresses the perception "people only rock one style at a time" at the start of verse two, and was clearly trying to reinvent himself for the 1990's. It's not a bad song at all - but I suspect the lack of traction for both the single and the album is because it's not what Stetsasonic OR Daddy-O fans wanted to hear. "Brooklyn Bounce" was more like it. Critics may have knocked him for recycling Zapp's "More Bounce to the Ounce," which even in '93 was heavily overdone, but the upbeat energetic Zapp bass suited his normally raspy high octane vocal tone perfectly. One brag line in the song seems unfortunate in hindsight though: "And yeah I'm comin out to play, with them hydrogen bombs and shit/Ignitin MC's like the World Trade got hit."

"Bounce" was more representative of what Daddy-O had to offer as a soloist. "Swung It, Blunted, Brung It" remains one of my personal favorite songs on the CD though. The Inner Sanctum offered Daddy an incredibly heavy, bass driven backdrop, and the Das EFX sample of the chorus has an incredibly humorous irony given Daddy blasts "you wannabe-a-screamer emcees/and all you Diggity Das triple-toungin wannabees" in the first verse. OUCH. Speaking of forgotten rap pioneers, Daddy drops a worthy tribute to "Kid Capri" on the Edman produced song of the same name. Daddy's "new style" serves him much better on "Nobody Move (Nobody Get Hurt)" thanks to Edman's spartan backdrop, slick bass, and letting the Odad's vocals echo off the walls. It's like finding a hip-hop concert in a cavern. Skits on many albums are a waste of time, but at least "How to Beat a Bootleg (God Don't Like Ugly)" let us know where he stood on street vendors taking money out of his pocket. "Ihatefonies (The Truck Drivers Song)" had the sense of humor of a Prince Paul production, even though The Unknown Ruffnex "created a song with no bullshit in it." Even the shortest of songs or skits had a message, such as Daddy-O asking you to choose which you prefer on "DAT vs. DJ." Police harassment is unflinchingly portrayed at the start and end of "Buc Buc Buk," but in the middle Daddy's just spitting to the heavy stomping Edman track. Relistening to this album to go 'Back to the Lab' makes me wish I knew more about Ed, because he really seemed to gel with D well.

What's the bottom line on this album? At a time where rap was transitioning from the legends of the 1980's to the new blood of the 1990's, older heads like Daddy-O got lost in the shuffle. To be fair though the marketing on this one was a complete joke, the first single was not the right move, and seeing Daddy do his best Morpheus impression on the cover six years before "The Matrix" didn't entice buyers browsing the already crowded rap section and most music stores. It's also longer than it needs to be at 48 minutes, and songs like the title track featuring YZ (a now almost equally obscure rap footnote) were good in the context of the album but never had any chance of exposure outside it.

"Brooklyn Bounce" could have propelled "You Can Be a Daddy, But Never Daddy-O" to mainstream heights - but it didn't. Heads in '93 wanted Dr. Dre and Wu-Tang Clan, so Glenn Bolton moved on. He may have kissed his rap career goodbye, but at least for the length of this review, it's safe to say he's gone but not forgotten.