:: Warner Music UK Ltd.
** RapReviews "Back to the Lab" series **
as reviewed by Grant Jones 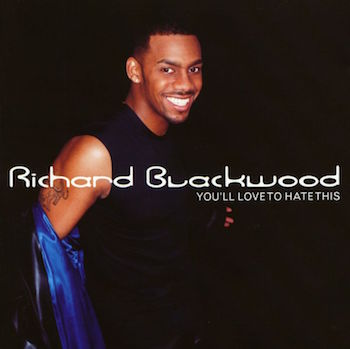 This is as close as the UK has had to a British Will Smith, and that's a stretch considering the vast gulf in popularity that "Big Willie" has garnered over the last two and a half decades. Richard Blackwood was a stand-up comedian and television presenter who had his own show on Channel 4 in 1999, which attracted guests as high-profile as LL Cool J and the Fresh Prince himself. He then sunk into obscurity until this year, featuring prominently on the soap-opera Eastenders, which airs every weekday on BBC1. He is now a household name again, and introduced himself to a new generation of viewers who aren't aware of his short-lived rap career. This review is for you guys.

Released in 2000, Richard Blackwood's "You'll Love To Hate This" is very much the antithesis of what was popular at the time - Eminem. The heavy influence of Pop and copycat production makes this an album that is more a curiosity than something you should really be paying money for in 2015, but there are some tracks worth checking out, even now.

Lead-single "Mama - Who Da Man?" was a #3 chart hit in 2000, and it's easily the album's best record, despite borrowing heavily from Will Smith's "Miami". In fact, it borrows most from Junior's "Mama Used To Say" (a popular song in 1982) because Junior is actually Richard's uncle and had a hand on this album too. It's kind of a big deal, as the Junior original has been sampled by everybody from Positive K to Heavy D, and was actually featured in the latest NBA game "NBA 2K15".

The hook on "Run For Ya Crew", as delivered by Mr. Vegas (still riding the wave of 1998's "Heads High") is bordering on nursery-levels of simplicity. Of course, this isn't supposed to be a lyrical album, but some of the material is almost catered to children - a cheery, accessible version of rap music, if you will. The other single, "1,2,3,4 Get With The Wicked" features fellow Reggae icon General Levy, and long-lost American emcee Deetah (remember her? Thought not) who actually gets more mic time than Richard (or RB as he calls himself). It's not a bad track to be fair, but the album suffers by having the two best tracks (and singles) at the start, as the rest of the record inevitably gets worse from there. "Someone There For Me" is like an early Christina Milian track, but Richard's verses are limited to 8 bars, highlighting the lack of faith in his abilities, as it means he never gets the chance to take the song where it needs to be.

The rest of the album is largely forgettable and strays in to embarrassing territory when lines like "my s*** just blends like ginger and ale" start appearing. Complete flops such as "Nasty" (which is anything but, given the family-friendly nature of the record) and "You Don't Know Me" (which sounds like a demo he made at the age of 16) just highlight how this wouldn't work in 2015. People used to buy albums off of the back of a catchy single, and I guess that's one of the good things about the modern music industry - they can't get away with making millions from half-assed albums any more.

If anything, the album is worth listening to for its production as it's mostly handled by Stargate, a duo from Norway. Their early work was similarly cheesy Pop for teenie-bopper groups such as S Club 7, Hear'Say and Atomic Kitten, but they have since gone on to produce for Rihanna, Beyonce and their most recent work that I'm aware of is Iggy Azalea's "Black Widow". The growth is certainly evident as Stargate are a true heavyweight in Urban-Pop nowadays, and this is an interesting, important moment in their career, highlighting that there were imitators to all successful rappers, no matter how uncool they may have been deemed by the Hip-Hop community.