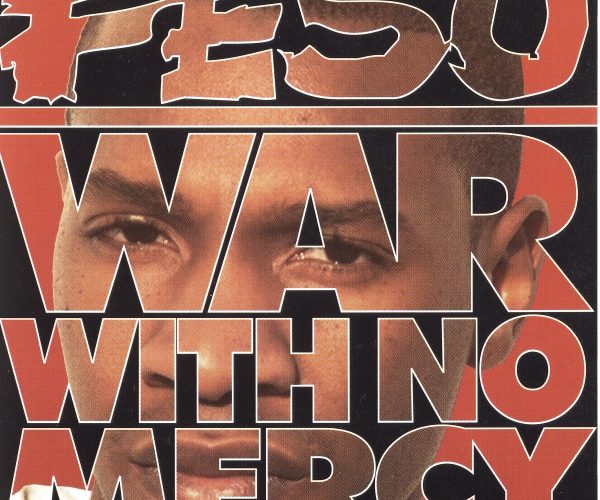 Fesu :: War With No Mercy

Bay Area rapper Mac Mall once rhymed: “Ask me who I’m votin’ for, I’m sayin’ Farrakhan / as I’m hittin’ the bong”. Personally, I doubt that someone who’s hitting the bong will move his ass to any voting booth, but Houston rapper Fesu may just be the exception to the rule. And Farrakhan is exactly the name he would’ve put on the ballot in 1992.

There has been a number of rappers affiliated with the Nation Of Islam to different degrees. However, N.O.I. officials were not always pleased with how their religion was represented in rap. That’s probably why in the early ’90s there was an officially approved Nation Of Islam MC to bring the truth to the youth. Those rappers who did pick up N.O.I. ideology, focused mostly on its demagogic power. The most prominent rap album to make continuous reference to it was Ice Cube’s “Death Certificate”. Consider “War With No Mercy” to be its more local, less vocal little brother.

Fesu’s talents first came to national attention when he became the ‘Source’s ‘Unsigned Hype’ in May of 1993. Marcus Robinson and Darryl Lewis of the Houston Oilers financed studio time and possibly even more. They were probably looking for national distribution by way of the ‘Unsigned Hype’ column. Because already in the October issue Fesu received 4 mics for his debut EP “Blind Cripple And Crazy”. The EP was expanded to album lenght, got picked up by Continuum Records and was distributed on a national level in ’94 under the title “War With No Mercy”.

To say that on this album Fesu is waging a ‘holy war’ against any heathens, would be highly exaggerated. Wars know many different battlefields. Fesu knows only one battlefield: The Greenspoint section of Houston, Texas he calls home. Still, Fesu is at war. On the surface, he’s at war with ‘the system’:

“At 6 people called me destructive
cause I said ‘fuck justice’ in exemplified ruffness
An Asiatic Black Original Man, I left my mark
and my set was a trailor park
Tuckin’ them hoes to the curb
See, your life ain’t shit if them actions can’t back up verbs
Now what’s left?
Nothin’ but a punk muthafucka that’s scared of Yusef
Livin’ in hell carryin’ a torch
Can’t play with the big boys, stay on your own porch
A God, livin’ like Farrhad did
Cast your bid and get a split wig
In the ‘Point we don’t play that
we stick a dick in your mouth and say ‘fool, why you say that?’
This goes to the H.P.D.
Bitch, it’s a war with no (mercy)”

On an album where violence doesn’t play such a promiment role like it does on others, it becomes evident that Fesu’s weapons in this merciless war are his words. “Just as cold as it sounds / I whip your ass with a verb and lay you down with a pronoun” he offers in the opening title track.

That his main focus lies on his own experiences in Greenspoint does not mean that Fesu is short-sighted. The broader picture comes in when Fesu refrains from the verbal black-on-black violence rap listeners are so accustomed to and instead unleashes on “crackers” and “(pecker)woods”. Even though you’ll often find racially motivated and even racist statements on rap albums, the frequency white people are called out on “War With No Mercy” is unheard of. Lines like “I’m wishin’ these white folks dead / put fear in they heart just to see the devil turn red” and “Fuck a ‘wood and his wife / she just good for eatin’ pussy and suckin’ on a crack pipe” make sure everybody gets the point. Like he says in “Fallin’ off da Deep End”: “I can’t stand them white folks, I cannot stress it enough.” Well, at least he makes his point clear.

Still, “War With No Mercy” is not out to instigate a race war. The subject here is Greenspoint resident Yusef ‘Fesu’ Cross who is trying to do good but is forced to do wrong. Ultimately, the war that Fesu is involved in is the war against himself. The concept has been used many times since, but Fesu was one of the first rappers to depict this inner struggle that many ghetto residents have to go through.

He does this in the most basic manner: “I can’t get a job cause I’m black / but I sho’ need one because my girlfriend’s gettin’ fat”, he states in “Uncut Funk”. Others might be there to help him, but it can be degrading to always have to depend on others: “Mama’s kickin’ me down with them ends / I love that woman, she gives me love in and out the pen / but I’m about to blow a fuckin’ fuse / cause I’m a grown-ass man, but still wearin’ lil’ boy shoes”. Fe knows: “I gotta get my act right”, but first: “I need a break from reality, man, I need some uncut funk”. Still through all the haze he’s perfectly able to make out his enemy, it seems:

“Them ‘woods try to see me
but I don’t kiss white ass, damn devil, please believe me
cause I’m a hard-ass nut to crack
You taught your niggas how to kneel and bow down, but not to fight back
I’m just trippin’ off these weed smokes
but watchin’ every goddamn move of these white folks
I can’t sell my dope because you’ll bust me
unless I sell it to my own, then you don’t touch me.”

The dope game plays a big part on this album as it obviously played a big part in Fesu’s life. The beginng of which he describes as follows: “Born a day late, a dollar short, a ghetto bastard / my father was a pastor / that no-good lyin’ bastard / kept his shit undercover / preachin’ that Jesus and beatin’ the shit out of my helpless mother / He’s takin’ care of his business / but my head’s fucked up, I grew up havin’ to witness this / Now the fuckin’ white man’s pullin’ my coat tail / lockin’ my ass up and sendin’ Fesu to jail / All hail Pharao / but I’m fuckin’ ’em up two times with Farrakhan on the straight and narrow.” That’s now, but what was then, before this twisted version of Islam changed his life? His mother kicks him out and he starts slinging dope. Drugs provide both the pusher and the fiend with false hopes, and young Yusef is no exception. But while he’s worshipping the Almighty Dollar, someone starts speaking of Almighty Allah. Fesu isn’t trying to hear it just yet: “Farrakhan say we gotta stop it / he say he got a new plan to put money in our pocket / but I’ma see if I can rock it / if it’s good for the goose, who am I to try to knock it? / I wanna live my lifestyle on the rocks / but right now I’m livin’ life out the matchbox”.

His life leads him into that other box, the one with bars and locks. Again Fesu makes it short and simple: “God frownin’ on a nigga / huh, that’s what I figured / for every effect there’s a cause / I got caught with my pants down wearin’ some dirty drawers / A nigga caught a case / wrong black time, wrong black place”. It’s those simple observations who carry so much weight that put Fesu way above the average reality rapper. In two of rap’s most touching moments, “Goin’ in Circles” and “Blind-Cripple & Crazy,” Fesu really gets down to what rap music is able to do. What it comes down to is the power of a simple poem. Add to that the musical dimension and you have a music with the possiblity to move not only people’s bodies, but also their minds and souls. “Goin’ in Circles” features lost soul legend Bobby Womack who renders a heartfelt reply to the scolding mother as Fesu tries to argue with her and ends up arguing with himself:

“Mama, I know that she don’t hear me though
She said, “Pack your shit, nigga, your broke ass gotta go”
And now I’m runnin’ after lost time
tryin’ to clean up around the house cause I’ma try and keep mine
They say us youth are defective, careless and wreckless
they want our ass up out of Texas
and now I’m feelin’ somethin’ missin’
Farrakhan said he care, and so I’m listenin’
tryin’ to decide who’s right or wrong
I need to get myself together cause I know I’m not gon’ last long
a co-dependant age 23
blamin’ the world for my problems but never takin’ a look at me.”

Well, as a rapper Fesu does take a look at himself, or more like one long, hard stare. What he sees is a zombie that is “blind, crippled and crazy”. “Blind-Cripple & Crazy” sums up this album as Fesu displays ignorance, arrogance and clear vision at the same time, concluding: “This world can’t fade me / but I’m blind, crippled and crazy.” Another selection, the unforgiving “Scariest M.F. Gonna Shoot”, he opens up with the mandatory Islamic prayer phrase “In the name of Allah, the Benificent, the Most Merciful” – talk about paradox, dichotomy and all those other fancy foreign words you won’t hear on this album. In the clearest way possible Fesu shows that he ultimately went from Detroit Red to Malcolm X: “Massa thought nigga was gon’ stay lazy / devil, you must be crazy.”

This might sound more like demagogic rhetoric than art. But it’s not. By allowing doubts and weakness into his accounts, Fesu enters the artistic arena. In this arena realness plays as much a part as sophistication. So while Minister Farrakhan would not have been pleased with Fesu’s excessive use of foul language, it actually adds to the credibility of this album. It shows just how torn this young brother was and still is. And if any listener might be uncertain about what to do, Minister Robert Muhammad awaits you at the end to warn you that “when you smoke that chronic, drink that 40 oz., call your woman a bitch and kill your brother over a color, you’re nothing but a silly tool and a slave.”

It’s been a while that this album came out, but I keep coming back to it. Simply because it’s not one-dimensional. It may not be multi-dimensional either, but when Fesu looks at (his) life from two different angles, he’s doing more than most rappers of his kind. And he’s doing it in a way that makes it hard to forget lines like “So now what’s life like? / Is it life-like or is its grip on too tight?” (“Blind-Cripple & Crazy”), “It’s so much pride in my mouth, I can’t chew it / if there’s a short to take I’ve already been through it” (“22 Ag'”) or, on a lighter but also ill-humored note: “Fuck yeah I’m local / so deejays spin my instrumental, them hoes don’t play my vocal” (“Fallin’ off da Deep End”).

I also won’t forget the many spine-tingling tracks that producer Ronald ‘T.K.’ Mims serves on “War With No Mercy”. There’s the occasional (and well chosen) sample, but there are also tracks that were recorded completely new, like “Goin’ in Circles”, “Blind-Cripple & Crazy” and the addictive “Uncut Funk”. The music is raw, but at the same time smooth and soothing. The tracks simmer, they don’t sizzle, boiling down to a thick, sultry stew of samples and original instrumentation. But it’s Fesu’s emphatic and frustrated voice that adds just the right spice to the stew.