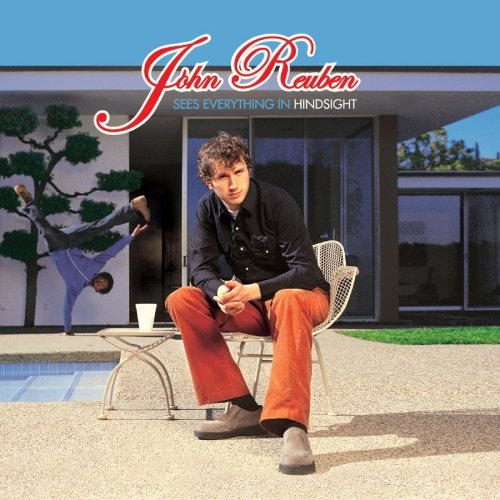 Whatever happened to the Beastie Boys? Or Beck (circa Mellow Gold)? Eminem has arguably blown the “minorities only” sign off of mainstream hip-hop’s door, but are you still allowed in if weren’t necessarily raised in the hood? John Reuben, a kinda hip white guy, is here to remind us, “Yes, I’m white, rather average, but hey, life’s a bitch for me, too.”

The album cover shows Ohio-raised John, in casual retro threads, sitting peacefully in the backyard of (probably) his grandparents Florida home while a black b-boy directly behind him, clad in a blue Puma sweatsuit, does a perfect handstand on one hand. Welcome to John Reuben’s world: he isn’t going to hip-hop gangstaland; he’s bringing hip-hop to Evanston, Illinois. Or Pomona, California. Whatever.

The strongest part of the LP is how most anyone in their 20s can identify, more or less, with what the hell he’s talking about. Raised in the project, roaches and rats? Some of us were. Pushed more powder than Johnson and Johnson? Again, some of yaw can relate. Wasn’t sure if a decision you just made fucked up your life? That’s a Reuben question, and we can all relate to that shit.

Peep the title track, which has a smooth bassline and cooing voice contrasting John’s desperation for an answer to life:

“I scream to God out of frustration
After another day of waking
And hating the fact that I’m still where I’m at
What’s the point of all this?
‘cuz I’m not seeming to find it
Is it meaningless?
I search the reason behind it
‘cuz these moments seem to drag on forever
And these years I have went through I’ve never been
This desperation has formed repetition within
Too insecure to attend and I’m too weak to defend
Here it comes again all in my world again
And now I’m left with no direction, no beginning, no end”

Despite the occasionally intense lyrics, John keeps it pretty mellow, almost like he’s talking while waiting for his turn on the Playstation. Co-produced by John the music, though not outstanding, covers his voice warmly like a blanket. The bouncy ill-track “Doin’,” with a corny call and response, slices up the song “Up, Up, Up” from indie rocker Ani DiFranco — that’s right, Ani Di fuckin’ Franco — and it works. The party-cut (at least for John) “Run The Night,” with its tight drum break and George Benson-inspired licks, is the number one candidate for my personal mix tape.

On “I Pictured It,” a guitar is used again, this time to create a sweet lullaby. On this cut John realizes, spoken word style, that each person’s experience of falling in love is unique. He can’t even explain himself because it’s so personal:

“You ever felt something you couldn’t explain
No definition, no name
Just a feeling
No definition, no name
She’s an artist alright
Capable of some of the most abstract stuff imaginable
And it’s made personal for me
You see, she uses my mind as the manipulated canvas for her perspective on life
So I’m the only one who can even see what I see
Until the art hits the heart and begins to take an outward expression
Kind of like an involuntary confession of the soul and who’s in control
It’s how many minds have been created by the hands of crafty irrationality
And have different paintings of reality hanging on the walls of a fictional gallery”

His constant questioning can make the LP overwhelming, like having a Waking Life or Magnolia DVD on loop: too many questions, not enough answers.

Luckily, John doesn’t pretend to know what he’s doing. For instance, the Beck-ish song “Soundman” is just plain stupid, and he knows it: “You know, some of you are probably asking what this is all about,” he says at the end of the song. “I’m gonna be honest: I’m not quite sure. It’s not about you. It’s not about me. It’s not about him. It’s not even about the soundman. Just don’t take life too serious.”