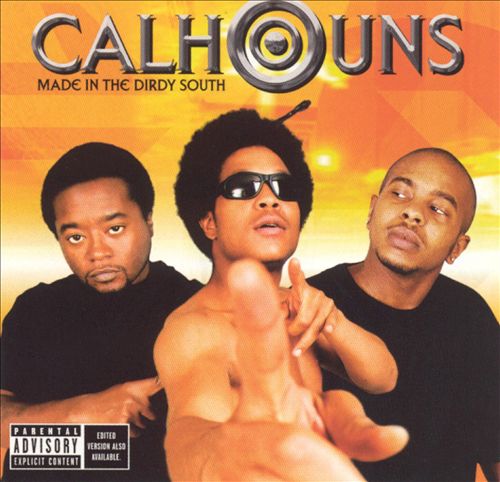 Calhouns :: Made in the Dirdy South

Sometime in the mid-nineties the Atlanta-based group Sniper Unit pondered the possibility of New York being “destroyed by a terrorist planting atomic bombs” and the stock markets collapsing, “all in a short period of time.” In 2002, New York is still standing and the stock markets are still trading. But we all know how in the past year, both institutions have been dealt blows that could have caused a weaker system to collapse. Sniper Unit, however, made it clear that no matter what the future brings, their own outlook will always remain bleek:

“If there’s a secret, why do you keep hidin’ it from me?
I just got showers in my projects, I been there since ’73
A point of view, police state, yo, they can’t wait
Times are hard already, can’t I get a break?
Ghetto bird soarin’ through my neighborhoods
from Decatur to Calhoun and through Teakwood”
(“Future”)

As the first anniversary of the terrorist attack on New York’s World Trade Center draws near, the duo, then known as Big L and DJ Swift C, is back with a new album. And while things generally may not change much, the two hope that for them, things will change for the better with the release of “Made in the Dirdy South”.

Dungeon Family fans might remember the name Calhouns. They introduced themselves on the Cool Breeze album “East Points Greatest Hit” in 1999 with the grande finale titled “The Calhouns”. The cut featured Freddy Calhoun AKA Cool Breeze and Briand Calhoun AKA Slimm Calhoun (another family member with an acclaimed album, last year’s “The Skinny”). Completing the line-up were Lucky and Pauly Calhoun, who are simply the two Sniper Unit guys who have been sharing the mic for years, going as far back as when Michigan’s MC Breed first moved down to Atlanta in 1994 (they were on his “Saucy” compilation). In fact, Dungeon Family members Cool Breeze and Backbone guest-starred on Sniper Unit’s 1996 album “Burnt up City”. But unlike Backbone, Breeze and Slimm, Lucky and Pauly didn’t make it into the exclusive DF circle. For whatever reason, in the case of this album the Dungeon Family ties are not as strong as they could have been. Organized Noize only produce three songs and big names like Andre 3000, Big Boi or Cee-Lo are absent from the marquee. Still, even though he’s not in the official Calhouns line-up for this album, Slimm could make it for a guest-appearance.

Production on “Made in the Dirdy South” is mostly handled by Lucky Calhoun AKA Swift C. He decidedly takes a more traditional approach to beatmaking than Organized Noize. Sparse, sample-free productions are the order of the day, the colorful, crunkafied sound of Organized Noize is sorely missing from this album. They did have a hand in the first single, “Outfits” (which might evoke flashbacks of “So Fresh, So Clean”), and they produce “Street Life” and “Some People”, but neither of those are up to par with what we’ve come to expect from this dream team. Still, Lucky is not new to the trade, and he churns out a few bangers of his own, such as the lanky “Owe Me” or the chilling “RGDG”. “Lick Hitten” features not only Rap-A-Lot artist KB (here credited as Big Cuzin), but also a classic gangster type groove.

Come to think of it, it might have been a wise decision not to include the Calhouns in the Dungeon Family, as they don’t seem to share all the family values. With Slimm missing in action and no Dre or Cee-Lo type of character in sight, the Calhouns seem to lack the free spirit that attracts people to OutKast and the Goodie Mob. Instead, they put a big-ass ‘No Trespassing’ sign up, warning people: “Somebody’s about to get slapped” (“Slapped”), and: “Y’all gon’ keep fuckin’ around with me / and turn me back into the old me” (“Owe Me”). In fact, that ‘old me’ shines through on a lot of the songs. “Made in the Dirdy South” is a street album, with a lot of tough talk (over unfortunately not so rough beats). That is nowhere as evident as on “RGDG”, where Freddy comes back to that often-drawn comparison between rap game and dope game:

“Man, the rap game like the d game, it ain’t never gon’ stop
one brother get knocked, the next one rise to the top
If you ever make it in the rap game as one of the best
man, get you a nine millimeter and a bullet-proof vest”

While Lucky and Pauly exhibit their proven chemistry every time they team up (“Street Life”, “Kingpinz”), Freddy showcases his quality as a storyteller/songwriter – not surprisingly, given his performance on the Cool Breeze album. Clearly one of the album’s highlights is his song “‘Partments”, about a boy literally fighting for respect in the juvenile jungle of school and appartment houses. In a similar vein is “Old Nat’l”, where they take you for a ride down Atlanta’s Old National Highway. Another strong effort is “Country” (with Uncle Calhoun AKA Big Howg Major), an invitation to come witness some of that southern hospitality – or hostility, for that matter.

Unfortunately, moments like these are few and far in between. There is just not enough musical or lyrical substance to take “Made in the Dirdy South” to the next level. Relying on catch phrases (“Run It”) and choruses for crunked out crowds to chant (“Shake what your mama gave ya / it took her nine months to make ya”), the Calhouns deliver a longplayer that might last you a few months, but nothing that wouldn’t find its way out of your CD changer again. The Calhouns make a decent attempt at getting their fair share of the Dirty South harvest, but they forgot to sow new seeds.

Calhouns :: Made in the Dirdy South
6Overall Score
Music6
Lyrics6