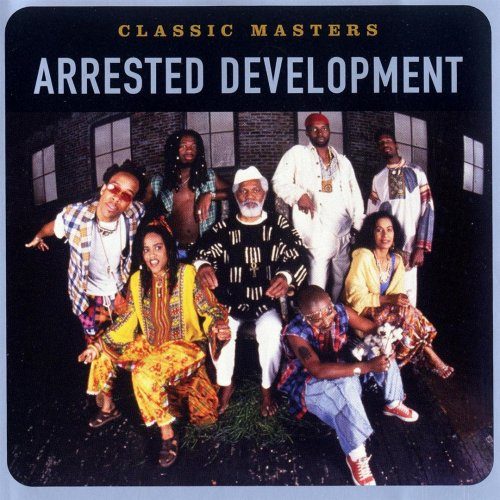 “Walk the roads my forefathers walked
Climbed the trees my forefathers hung from
Ask those trees for all their wisdom
They tell me my ears are so young (home)
Go back to, from whence you came (home)
My family tree, my family name (home)
For some strange reason it had to be (home)
He guided me, to Tennessee”

If those words ring a bell for you, then I don’t need to tell you who Arrested Development was. If they don’t, then you’ll want to follow along closely as I explain. Debuting 14 years ago in March of 1992, Arrested Development’s debut album “3 Years, 5 Months & 2 Days in the Life Of…” was a revelation not just to the hip-hop community, but to a larger crossover audience that would follow. Lead vocalist Speech flirted between the boundaries of R&B and hip-hop with a musical flow, one which powerfully and simultaneously conveyed both his words and emotions. As proven by the chart-topping lead single “Tennessee” quoted above, Speech wasn’t afraid to use that voice in a thought-provoking manner. Speech has a dream asking God for enlightenment. Where did God guide him to seek enlightenment? Tennessee, where Speech walked the roads his forefathers walked, and climbed the trees his forefathers hung from. Taken out of context Speech’s words seem brutally shocking, but his musical flow gives you insight into his own mind. Speech recognized that brutality was part of his own history, and instead of denying the evil he acknowledged it and moved onward in his search. Guided in this search by the members of A.D. providing musical support with a beautiful track, the song became a monster hit and paved the way for “3 Years” to sell over four million copies.

At the time, it seemed as though Arrested Development would lead the way to a revolution in rap, bringing forth the Afrocentric movement which has been bubbling underneath the surface of pop culture to a worldwide audience. Unfortunately for both Speech and his group, hip-hop had already begun shifting in a harder and edgier direction, ushered in by the hard G-Funk beats of Dr. Dre and his laconic partner-in-rhyme Snoop, and the emergence of a stripped down raw sounding East coast rap collective called Wu-Tang. Instead of bringing forth the movement, “3 Years” became one of the final statements of that era of positive affirmation before hip-hop was dominated by violent lyrics and materialistic pursuits. A.D. tried to resurrect their sound in 1994 with “Zingalamaduni” but unfortunately for them the fickle whims of the audience who was loved them so showed no interest in their sophomore release. The group broke up in 1995 and Speech went on to a career as a soloist. Ironically none of Speech’s solo efforts have eclipsed the only release by fellow A.D. member Dionne Farris on her solo debut “Wild Seed — Wild Flower” in 1995. Speech has nonetheless plugged on and is well-respected as a hip-hop artist.

So what is the legacy of Arrested Development over a decade later? Aside from their landmark debut album and it’s smash hit single, there is a lot of great material collected on “Classic Masters” illustrating A.D.’s philosophy that empowered spirituality could be just as funky, head-nodding and finger snapping as any hardcore hip-hop artist. In fact A.D. was not entirely opposed to using stronger means to achieve African liberation both physically and mentally, as Speech illustrated on “Revolution” when he quipped “it’s either the bullet or the ballot.” A.D. was far from a weak, namby-pamby froo froo group of tree huggers and flower children. As KRS-One once said, “If negativity comes with a twenty-two, positivity comes with a FORTY-FIVE.” Yet at the same time, A.D. also hit a lot of different notes in the hip-hop diaspora. “Natural” was a snappy and punchy ode to African beauty. “Mister Landlord” questioned why anyone should take shit from a property owner with a racist attitude. And “Southern Fried Funk?” Well, the title is self-explanatory, but you may not have heard this song before – it was the B-Side of their “United Front” single.

Unfortunately, it’s a reviewer’s job to be critical, even when their own inclination might be to give an album of “Classic Masters” like this one a pass. I can’t let it pass though that this album clocks in at under an hour. Why is this bad? Because the liner notes of the album go out of their way to point out that they culled B-Side songs (which they did), soundtrack cuts (which they did) and Speech’s solo efforts for songs such as “Like Marvin Said (What’s Goin’ On)” and they still only came up with 47 minutes. A full album should probably be at least 60 in this day and age. Even those of you at home familiar with Arrested Development would probably say, “That’s kind of harsh Flash – it’s not like they had that many hits.” I can cite you at least four more tracks though worthy of inclusion – the “People Everyday” remix (much better than the original, which IS included), the powerful and haunting album track “Washed Away,” and two more of Speech’s solo songs: “The Hey Song” and his cover of Bob Marley’s “Redemption Song,” both from his overlooked 1999 album “Hoopla.” For those who have never heard Arrested Development, “Classic Masters” is a great place to start – it’s just that they could have done so much more.