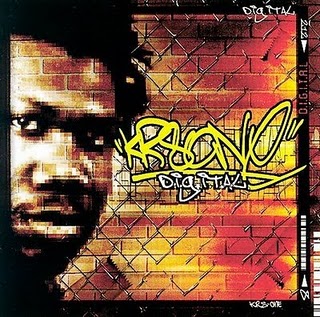 The liner notes for “D.I.G.I.T.A.L.” lay down the law right from the start: “This compact disc is a HISTORIC COMPILATION of recordings [not] previously available […] and should not be considered a current KRS-One release!” That’s alright. At thirty-eight years old, with a career that spans three decades, KRS-One has more than enough releases to sate his fanbase. If you’ll forgive the wrestling analogy, he is the Ric Flair of rap music – you might love him, you might hate him, but you damn well better respect him for what he’s done. You can’t love hip-hop and not be in awe of the impact he’s made on the music and the culture, even if you occasionally find his ego about it irritating. Every wrestler that comes up through the business wishes they could do a figure-four leg lock or a knife-edge chop the way Ric Flair does, just like every amateur rapper wishes they could rip to a beat the way KRS-One does – and each of these living legends keeps on working year after year showing the young punks how it SHOULD be done.

There’s nothing to complain about then when a KRS-One album automatically proclaims itself “historical” and “not a current release.” Does it matter? People didn’t rush to the stores en masse and buy “The Ultimate Ric Flair Collection” expecting to see his best matches only from 2003. The DVD did land office business simply by compiling some of Ric’s greatest moments from a long and fabulous career, and packaging them in an easy to access and enjoyable way. “D.I.G.I.T.A.L.” does much the same thing. Songs like “Free Mumia” featuring Channel Live and “Ah Yeah!” are culled from his 1995 self-titled album. Songs like “HipHop vs. Rap” and the “Woop! Woop!” remix of “Sound of Da Police” by Showbiz are culled from vinyl singles KRS-One released that may be obscure to even his hardcore fanbase. Other songs are anyone’s guess – “Tell the Devil Ha!” is probably an unreleased track from “Spiritual Minded” judging by the lyrics, but could just as easily be from the “Maximum Strength” album he cancelled in the late 1990’s. Some of the fans who eagerly hope to one day discover a bootleg of this unreleased CD can take solace in the thought much of “D.I.G.I.T.A.L.” could be from that release. Songs like “As You Already Know” featuring Big Pun and Kool G. Rap and “Bring it to the Cypher” featuring Truck Turner seem like strong candidates for that theory:

“Yo… daytime, nighttime, anytime, I got plenty time
To kick many rhymes, big time, small time
Taking it to you over time, showin I’m flowin rhymes
Bright I shine, simply cause I’m
Lyrically be kicking out the tighter rhyme, still I climb
Ringin the chime, in your mind, you fall behind
Picking up your rhyming skill, I am fulfilled, when I kill at will
Still number one for fun, kill another one
Battle your buggin son!
Look I cut your tongue, KRS-One is never done
I am the clever one, this ass-whippin will make you better son
Go and tell your mum I took a bite out of your bum
Anytime you want it, doggone it, yo put me on it
Never fronted or flaunted, you never disappointed, get on it
A simple jam, not that I give a damn
Let me tell you who I am, just ask your buddy
Put your cash on Kris, I bet you double up your money
You can call me Chris Rock, ain’t nuttin funny”

There’s plenty of dope material to go around here. “A Freestyle Song” featuring Common features both rappers flowing over the beat to Biggie’s classically eerie track “Who Shot Ya.” “Music for the 90’s” featuring G. Simone is not ostensibly familiar to me, but if it’s as good as the Kid Capri remix featured on this CD, it must be all that and a bag of chips. Some tracks like “Let it Flow” and “When the Moon…” featuring Courtney Terry seem like brand new KRS-One material, despite the CD’s claims to the contrary about being contemporary. Other songs such as “Smilin’ Faces” featuring Shock G are as likely to be THEIR unreleased songs as Kris Parker’s. By the time you’ve reached “Harmony and Understanding” at the end though, it hardly matters whether or not you’re sure where each track comes from – much like the fact that watching “The Ultimate Ric Flair Collection” you’ll get a good match from Ric whether he’s wrestling for NWA, WCW or WWF. Kris himself can explain this best on the outro track he recorded with Sway & Tech entitled “I’ll Be Back”:

“Never forget, the bigger the budget the bigger the debt
You gotta be willin to rock in the middle of dry and the middle of wet
But I’m willin to bet, on the Sway and the Tech, they stay in effect
Never been a pain in the neck, they gainin respect
Nevertheless I’ll WRECK YOU, now you know what Sway and Tech do
I’ll be back, but for now just SECKLE!!”