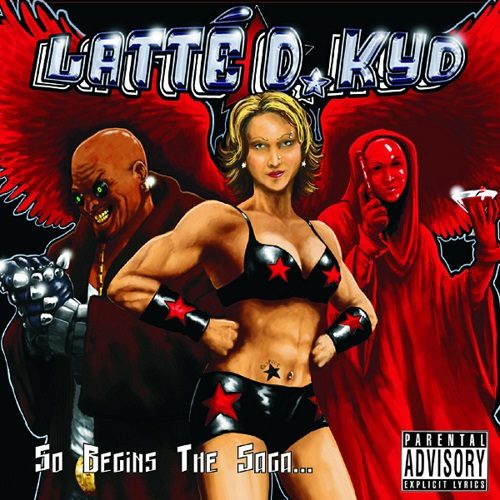 Upon getting this CD out of the package, I wasn’t sure what to expect from it. I try not to let a cover influence my views, but I’ll admit that my first impression was “this is interesting”. Lattes are not something you hear about in a rap lyric, so a name like Latte D. Kyd sets it apart. The cover itself features an illustration of Miss Latte D. Kyd in what looks like some latex top and bottom, piercings, a tattoo, and a buff body. It happens to be a white woman, so these factors alone made me wonder who this Latte D. Kyd was.

“So Begins The Saga…” is a four song EP showing off D. Kyd’s talents as a rapper. In “Hood” she raps about how she wants to go with her man to his hood so she can meet his mama, laid over a funky instrumental. “Rich Bitch” has her talking about how people see her and how those opinions do not phase her one bit.

There are times when some of her lines seem like retreaded hip-hop cliches, while other times the lyric and flow work perfectly and you want to listen to her more. It is those times on this EP when I wished the production would have been tighter.

All of the instrumentation is played by real musicians, but there are times when a verse or two could have been made more effective with something more sampled-based. There haven’t been too many white female MC’s in the game, so the only woman I could compare her to would be Michelle Visage (of Seduction/S.O.U.L. S.Y.S.T.E.M. fame).

What I liked about this is her need to not be anyone else, other than a rapper with a bit of skill. A project like this could have been a disaster if someone else was trying to be something they’re not. I did not sense that with Latte D. Kyd.

I’m not sure if the comic book persona on the cover and in the booklet is something she plans to stick with. I say get rid of that and stick with strengthening the lyrics, flow, and music, because there’s a hell of a lot of potential here.