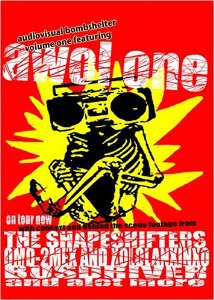 Awol One :: A Road to No Where

While mainstream artists have already begun using the DVD as a new marketing medium and another way to please fans, the underground has been lagging a bit behind. Despite the lack of music videos, underground artists still have much to show fans in the form of live performances and insight into the world of rappers who hustle because of their love of music. Awol One’s intro to the DVD world is a successful one for the most, despite some drawbacks. “A Road to No Where” is a unique look inside the life and mind of artists who aren’t getting rich off of hip-hop but grind night after night anyways.

First, its important to note that this DVD isn’t focused on Awol One’s life or video repertoire as other DVDs are, instead its almost like a DVD album. The DVD menu sets the mood of the experience that awaits. The layout is simple, but the what really captures your attention is the horror movie footage that is on loop in the background. Taken from an old 1970s foreign flick, whose name evades me at the time, the clip is unexpected and introduces the viewer to the sometimes abstract and wholly original work to be found inside.

The true highlights of the DVD are the musical interludes that feature music produced by Awol One and video clips consisting of an odd assortment of images taken from old horror films and any other source that happened to inspire Awol-One. Not only is the music head-nodding and dope in itself, the images surrounding the music are entertainment in themselves. This reviewer may be influenced by his own love for horror films, good or bad, but any one with an affinity for good music and original concepts should be happy with what Awol One cooks up.

The majority of the DVD consists of live video footage from The Shapeshifters and other Awol One affiliates performing and traveling across the country. For those not familiar with these artists, this DVD may not be the best place to start. The quality of the live performance, as is a problem with many a hip-hop concert, is not very good. From the mics sounding muffled to the music levels being too high, the footage showcases all that goes bad at hip-hop concerts. It’s no one’s fault in particular as hip-hop music takes a lot of work to make sound good live and most promoters refuse to invest the money or time it takes to truly deliver a good hip-hop concert. The consequence of this is that unless you are a die hard fan you will find it difficult to understand what is being said and won’t get a very good feel of what these guys are all about.

Taken as a whole, the DVD is not as strong as it could be. For those who were already fans, it may be the perfect addition to your collection. For those new to Awol One, a CD purchase may suit you better as the live footage that comprises this release is of a low quality and may put you off to an otherwise solid crew of emcees.

Awol One :: A Road to No Where
5.5Overall Score
Music6
Lyrics5