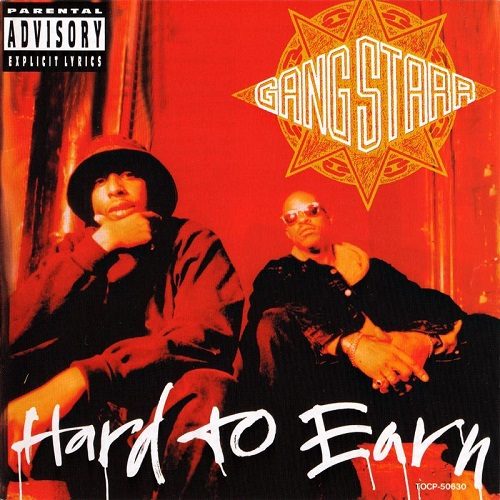 GangStarr is undeniably one of the best groups in modern rap history. DJ Premier and the Guru are models of consistency that most artists can only dream of becoming. The formula is relatively simple: Let Guru speak his mind over whatever Primo wants to throw down on top of the drums. They take their time between releases, perfecting and evolving their music a bit while pursuing other projects individually, and when their fans have developed a sufficient hunger for more music, they come to the rescue. In their early days, before other artists had developed such a demand for their services, the records came more frequently. Since their 1994 album “Hard to Earn,” we have only witnessed the release of two GangStarr albums and a greatest hits compilation with a few bonus cuts. “Hard to Earn” stands as the final product of their more prolific days, and despite minor flaws, it is just as effective a gauge of their legacy as anything else.

Guru is likely the steadier of the two. While Premier has been constantly brilliant throughout the GangStarr catalogue, he has certainly been more likely to explore the confines of his style. Guru just keeps on trucking, and he has become one of the trustiest voices in hip-hop. He is an emcee who shows admirable restraint in his occasionally maligned monotone, but will not hesitate to verbally maul those whose talents and motives he doubts. For those who have become close acquaintances with the music of GangStarr, he is a comforting voice in a musical world that is frequently harsh. DJ Premier has worked with the likes of Rakim, KRS-One, Biggie, Jay-Z, and Nas, but while his production resumÃ© reads like a who’s-who of NYC legends, Guru has always sounded the most at home over his sharpened drums. Premier knows it too, because while other collaborators like the Group Home, Afu-Ra, and Jeru have gotten their share of time in the D&D Studio, he has never left Guru’s side without eventually returning.

GangStarr’s fourth album, “Hard to Earn,” is their oddest and most uneven work. For better or worse, it is also their most creative. Premier’s production bounces around in eclectic fashion, and he uses both old-fashion jazz loops and samples that are far more obscure and difficult. “ALONGWAYTOGO” opens things up with a high-pitched electronic-sounding squeak that Guru blesses with his familiar words. The hook consists of a more traditional musical selection and some signature turntable work. The unorthodox combination of these elements is strenuous but ultimately rewarding listen. The other strange musical selection, “Brainstorm,” doesn’t fare as well simply because Guru cannot keep up with the BPM of the drums.

“Code of the Streets” has Guru breaking down the rules of behavior in the hood over a more typical Premier production padded with somber strings and some breathtaking work on the turntables. Nearly every song has a specific topic tackled by Guru. “The Planet” is an ode to Brooklyn in which Guru chronicles his first moments in the borough over a minimal but satisfying drum pattern. “Suckas Need Bodyguards” has a chorus proclaiming “fake emcees, they always act hard, but won’t walk the streets without their bodyguard.” Premier’s beat is functional, but this song stands as one of the few instances in GangStarr’s history during which Guru outshines his partner. His monotone is gone here, and in its place is a forceful and angry delivery that is clearly an example of Guru needing to get something off his chest.

There is plenty of time to showcase the “GangStarr Foundation” detailed in the inside jacket. Jeru the Damaja, Big Shug, Lil’ Dap, and Melachi the Nutcracker all show up, most notably on the sequel to “I’m the Man” entitled “Speak Ya Clout.” Jeru leads off, Lil’ Dap comes through in the middle, and Guru finishes. As with “I’m the Man,” DJ Premier comes through with three separate beats, each of which fits the artist and serves its purpose admirably. Melachi appears on the interlude “Words From the Nutcracker” only to reinforce the theory that GangStarr was just putting their boys on with their assistance on Group Home’s “Livin’ Proof.” Big Shug fares far better on “F.A.L.A.” with amusing lines like “word to Joe Frazier got to do what pays ya, give a nigga pain just like dysplasia.”

The two lead singles are also the best songs on the album. “Mass Appeal” discusses the tendency of rap artists to sell out to the radio, though Guru mostly takes the opportunity to kick battle-rhymes. Premier’s beat is among his best, a stuttering and repetitive loop that is endlessly catchy. “DWYCK” with Nice-N-Smooth comes at the exact middle of the record, and remains one of the truly great party starters from the early nineties. The stripped-down production consists of only drums and a bassline, which allows the artists to take the spotlight in each verse, which they do. Smooth B’s subdued rhymes in the third verse stand out the most, though Greg Nice and Guru do their thing as well. The most unforgettable part of the song, though, is Primo’s turntable wizardry between verses, a breathtaking display from a true master. Released initially in 1992, “DWYCK” took two years to be released on an LP, and it ended up being the best song on “Hard to Earn.”

There are a couple of hidden gems to fill in the gaps as well. “Now You’re Mine” is most notable for the repetitive sample that DJ Premier uses, but the track is harmonious enough to never sound dull. Guru does his usual thing here, not stealing the show but doing Premier’s steady work justice. “Tonz â€˜O’ Gunz” is memorable because of one of the catchiest basslines in Premier’s entire body of work, and Guru explains his beef with people who pack firearms. He switches his voice up a bit as well, which comes as a surprise on the first listen. The disruption of his sleepy monotone serves to remind us just how entrancing his voice can be at times. And of course, the little things separate the construction of the song from a lesser duo’s work, from the faintest of rapid-fire gunshots in the background to the immortal scratching between verses.

“Hard to Earn” is spotty at times, and is overlooked because it falls between the seminal “Daily Operation” and “Moment of Truth” in their discography. For the hardcore fan, this record is intriguing because of the experimentation that DJ Premier exhibits in his eternal search for the perfect music. There are a few truly odd concoctions here that are clear deviations from his previous and future work. Throughout it all, Guru stands as a rapper who has not completely perfected his craft, but who is always welcome riding over Works of Mart. His droning voice is a vehicle for bragging, conscious rhyming, and storytelling, and he is as steady here as he is on any GangStarr release.

Go ahead and pick this up, the trust they have earned will not be abused on “Hard to Earn.” The cover is the quintessential image of GangStarr, with DJ Premier more prominently seen leaning forward, while Guru lounges a bit further in the background. Both are looking thoughtful and neither looks like he’s going anywhere anytime soon. The music contained within reflects this mentality, because in 1994 they were still cruising along, living life and making some excellent music for their fans. Despite the occasional uneven qualities of “Hard to Earn,” it belongs in your collection just like everything else they have done.