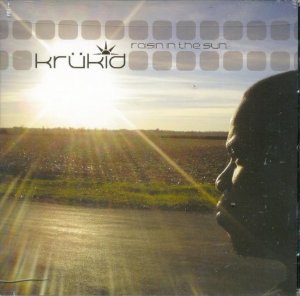 Kruekid :: Raisin in the Sun

Hip-hop has earned a reputation, at least among the admirers of more sophisticated music genres, of being simplistic and uncouth – of being unabashedly unmusical. This though, as anyone who has bobbed their head to the grainy bumps of a mixtape knows, is part of the appeal. Most people can muster at least a feeble imitation of a beat-box break (see Justin Timberlake), and all you need to rhyme is a left hand to cock up in the air. Hip-hop isn’t a product of music schools or classical tradition. You don’t need lessons, you don’t need to buy expensive instruments or sheet music. Such low barriers to entry are at the root of hip-hop’s diversityâ€“ a motley assortment of thugs, suburban white boys, jazz drop-outs, and sun-starved synth-heads. But just what keeps hip-hop interesting allows for some truly baffling products to sneak out onto the market.

Kruekid, an East African import, got his start winning a country-wide competition in Uganda. From such an auspicious beginning, he made the continental hop, landing in the hip-hop hotbed of Illinois. Given his unusual origins, I was hoping that “Raisin in the Sun,” would bring a refreshing sound to my peevish and jaded critic ears. Unfortunately, it is instead one of those albums that make you wish it was a little tougher to scrape together a hip-hop track; that you needed a bit more than a four-track (does anyone use those anymore?) and a cheap mic. The wave of artists coming out of the mid-section of the country has been one of the biggest changes in the underground as of late, with new sounds developing away from the coastal powerhouses. Now though, with rafts of unsigned New York and L.A. artists waiting in the wings, it’s a hard to understand why someone with such tepid offerings is getting distributed. No insult – simply an observation. Kruekid, though obviously talented, was not ready to release an album.

I’d rather not turn this into an extended criticism of the albums shortcomings, but I’m finding it hard to avoid; let me indulge for a moment or two. To start, something must be said of the uninspired and uncoordinated efforts behind the boards. The production as a whole has a hasty cheapness to it, built around a fuzzy drum machine without proper punch and weak-willed instrumental whines. If KrÃ¼kid had really compelling things to say, it would not be so offensive, but in the face of material that does not stray far from the conventional topics, it’s hard to stay engaged. True, he has a fair amount of good â€˜ol “socially conscious” material, but in today’s game, rappers calling out Bush on national TV, you need a bit more than that.

Kruekid does not challenge himself. “Dreaming,” the third track out, has an impossibly generic hook – imagine being plunged into a pointless J.Lo – Ja Rule duet – without the million-dollar-a-minute production. I’ll spare the American Idot reject that croons most of the album’s hooks; there is plenty of other material to work with. “Suitcase (Move Slow)” seems like a garbled rip-off of that infamous rip-off-artist himself, Kanye West in “Drive Slow”. When Kruekid does pull together a strong set of verses, like on “True Story,” he’s right back where he began, undermined by the tinny Reason 2.0 backbeats.

What’s frustrating is that from time to time, Kruekid shines through the unhelpful production and his own sleepy delivery, and pulls off exciting, interesting tracks. In the hazy lead-off, “African American American African,” he investigates the complicated relationship between Blacks in the United States and Africa, “I talk of Africa but I don’t want to go there though”. He is able to probe complex issues with a lyrical vividness that few can match, but stays mired in formulaic structures and beats. Only at the tail end of the album is there a glimpse of what he is capable of.

On the last track Kruekid pulls out the kind of song that he could have built a solid album around. “This is Life” travels to his Ugandan roots, the mean streets a continent away from American urban ghettoes, yet eerily and disarmingly similar. He comes into his own; the smoky vaudeville violin melody hits the spot, and his typically narrow delivery gains depth in the conviction of his storytelling.

“I been in places you wouldn’t believe or can’t fathom
Where peeps never seen lit streets of black phantoms
Where rabies dogs walking around itching to bite you
Pick-pockets running the streets itching to swipe you
Country-side got rebel groups dieing to snipe you
When every street corner got a doomsday disciple
Street kids eating out of garbage bins
While the politicians get fat in the parliament
Locals sweating from the heat that they’re farming in
Kids make the most of the spots they’re starving in
People rocking second-hand clothes and hand me downs
And it don’t take weddings to bring the family round
Some places got electricity and some don’t
And some spots, the knife will kill if the gun don’t”

It’s not just a romantic vision of a struggling tropical Africa, it’s personal – a picture of his life, a lyrical vision. Snip out a line here and there, and it could be a vision of the urban poverty that exists in American streets. Same shit, different place. This is Kruekid’s strength, the ability to bond together different parts of the world, and it’s too bad he waits for the last verse in the last song to tap it. He brings an experience that few can relate to and fewer have sung about. And in the relentless mills of musical uniformity, that is a gift worth having.

A song though, does not an album make, and “Raisin in the Sun” is unfortunately a non-starter. An assortment of mediocre tracks, ranging from the disinterested to the downright lousy, put together without a cohesive netting or artistic guiding force. Nevertheless, there are bright spots. Kruekid has got something more in him than most, and he is capable of bringing a new perspective to the worn hood-rap scene. Hopefully, the next time we hear from him, he’ll be able to tap into his potential and create a front-to-back compelling piece of work. Until then, we’ll bide our time and bitch about how much better hip-hop was back in the day.