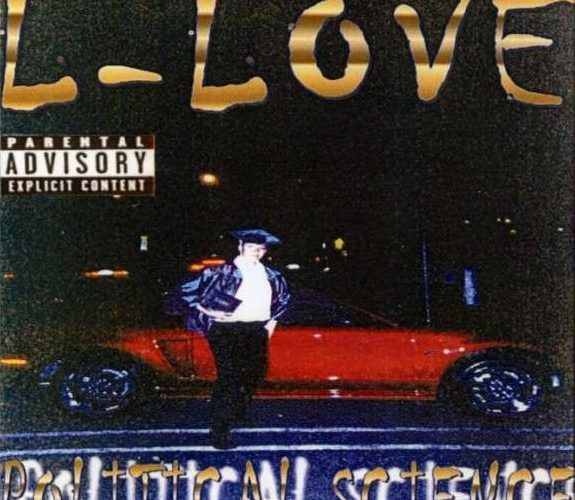 It’s difficult to be critical when you have a personal connection to the person behind the artist. My personal connection with L-Love is the fact that he got into contact with me after my very critical review of his last release. While obviously opposed to my view of the CD, throughout all correspondence L-Love has been very respectful and positive. I respect that a lot and I think that being able to overcome criticism and still be respectful is an important characteristic that not enough entertainers possess. With that said, as much as I feel for L-Love and respect him, his music still doesn’t move me. His latest and last project, “Political Science” aims at a more serious tone than his previous work and does show some improvement from his other work which I have heard but it still doesn’t manage to compete in quality with other rap albums. The album starts out with “Underground Legend” where L-Love asks:

“Sold a hundred thousand units in these years
How am I not an underground legend out here?”

The beat is a slow and imposing beat with a simple bass line and string melody. It actually works well for what the song is. This time both L-Love and Booda Cess drop decent verses, with Booda Cess’ verse stealing the show because his flow is clearer than L-Love’s. “Crack Drug” features another simple beat courtesy of L-Love and Pola Bear and once again, despite its simple nature the track does its job decently. Booda Cess once again steals the show mostly because his verse is much clearer and easier to understand than L-Love’s. “What’s The Use” is a complete change of pace as an artist named 2Ban comes through and drops a unique spoken word track where he drops knowledge over a simple, yet funky beat. Once again the quality could be better, but it’s actually a decent and different track. Coincidentally it’s the first time on the album that a song addresses anything close to the subject matter implied in the title.

“Flashy Five” is an ode to cars, but once again falls short because of the beat’s simplicity. “You!” is one of L-Love’s better lyrical tracks but the beat features only drums and is entirely too simple to meet today’s standards. “Your War On Terror” is another of Love’s better lyrical tracks and features a strong political theme, but the beat falls way short once again and the track features an unnecessary and too long intro. Booda Cess once again comes through with a much better verse, mostly because of the energy and clarity of his flow. 2Ban returns with another spoken word track, and is once again effective. The only major problem is the fact that he straight jacked Dr. Dre’s “Bitch Niggaz” for the beat. While I love the beat, it completely blows every other beat on the album out of the water in both technical quality and sound quality making the shortcomings on the album that much clearer. “Do Yo’ Thang” features the album’s second best original production with a high energy beat which features layered synths. Chief Piece drops a battle verse though the sound quality on his verse is low.

“Animosity” follows and is a Booda Cess solo track which also features the album’s best production courtesy of Garden Bred Entertainment. Booda Cess showcases his dope flow though his lyrics aren’t all that great as they are standard street brags. The album ends with “Forget What A Hater Says! (Radio Edit)” which I assume is a radio edit of a song on a previous L-Love album. The process of editing used is completely unacceptable as all that is done is the volume is dropped for the whole track when a curse word shows up. The song itself is probably one of L-Love’s better tracks. He’s addressing the haters, myself included I’m sure, over a decent piano driven beat.

Despite me actually liking this CD a lot more than L-Love’s previous work, the album is still full of too many problems to be recommended. If the album was mastered professionally and if the verses on this album were recorded professionally it would sound 10 times better. There are too many moments where L-Love’s voice trails off, drops in volume, and is almost impossible to hear. The production on the album is also entirely too simple to compete in today’s marketplace. The beats knock all the time, but a good song needs more than a beat. Even the simple melodies are not enough to make the music sound good. I would say L-Love could improve his output, but being that this is his final album I don’t see that happening. The fact that he managed to put out 13 albums by his account and also be able to retire on his own terms is commendable. And in all honesty I have much respect for the hustler in L-Love who was able to put out that many albums over the years and even get coverage in a top notch magazine like Murder Dog. But as far as the music, despite L-Love’s best intentions I still can’t recommend it.