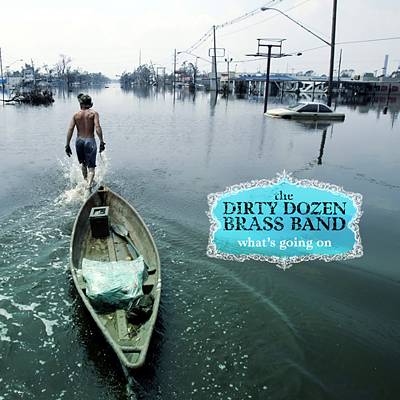 In the early nineteenth century, the New Orleans poor joined so called ‘social and pleasure clubs,’ as they were the only affordable alternative for a decent funeral. When the mourning family followed the funeral procession to the graveyard, they were followed by designated brass bands, which played the deceased one last farewell. When the mourning were out of earshot, the band would burst into cheery dancing tunes for the living left in the streets. But what to do when it is your own city being carried off to the cemetery after drowning in a hurricane? Play like hell and hope it will revive the spirits of the people still left in the streets.

One year after Katrina robbed New Orleans’ inhabitants of their homes, dignity and livelihood, one of its most important musical icons, The Dirty Dozen Brass Band (DDBB), tries to express its feelings about what happened in the best way they know how to: recording the album “What’s Going On?” The New Orleans band, famous for combining R&B riffs with old-fashioned brass music, soul, and hip-hop, has been largely responsible for the revival of this typically southern way of making music. By donating a percentage of the album’s revenues to theTipitina’s Foundation which supports New Orleans’ musicians financially, they will try to keep it alive.

The way DDBB recorded their eighth studio album was exemplary for the current state of Crescent City’s population. Almost half the band lost their belongings in the hurricane and the subsequent flooding. Since most band members lived in or around the Big Easy they were used to get together at one of their favourite recording studios. In the process of making “What’s Going On” seeing each other on a daily basis was made virtually impossible. Flight schedules and hotels had to be booked, since the brass band was scattered all over the nation. In 2000, a census indicated New Orleans had 484,674 inhabitants. A year after the evacuation the most recent figures show a number between 192,000 and 230,000. Half the city has been relocated and considering the slow ongoing reconstruction it is unclear they will ever return home.

“What’s Going On” is the question at hand when looking at this tragedy of enormous proportion. You may or may not have realized it already, but that musical question has been asked before. This 2006 tribute album was originally recorded in 1971 by the legendary Motown crooner Marvin Gaye. Even for a band with the reputation of the Dirty Dozen, it is risky to redo one of America’s most influential recordings in musical history. Gaye, who was a much-loved though uncontroversial R&B idol, decided to speak his mind on foreign wars (Vietnam) and domestic struggles. Motown mogul Berry Gordy almost kept the record on the shelves, as he considered it too political and controversial to be a success. Gaye stood his ground and was rewarded for his resoluteness.

Because this STILL is a RapReviews review, I will first have a look at the MC’s DDBB asked to help compose this musical outcry. DDBB have never been afraid of experimenting with new styles, like getting involved with dance and hip-hop. Getting Public Enemy’s Chuck D on board for this project isn’t really that unusual for them. Chuck D is just as politically involved and controversial as the original record Marvin Gaye put out, so it seems only fair to let him handle the vocals on the remake of one the most important protest songs in American history. The opening chords of the original record are discernible, but DDBB give the song a ‘gumbo twist’ right from the start. After a minute of roaring trumpet play, supported by an obese sounding sousaphone, Chuck D spits “What’s Going On” in 2006:

“What’s Going On?
When all them guns is drawn
Here’s a memo: Remember?
There’s a few wars going on
A couple overseas
And one on my front lawn
When common sense was common
And now it’s all gone
What’s going on?
That’s going on!”

Chuck D sounds as furious as he did on his debut recording album. He lashes out at all the people he holds responsible for the current crisis: the politicians and the apathetic alike. His words have considerable impact, but his rhymes are sometimes offbeat because of the emotion he pours into his words. His charisma on the mic is unmistakable, but I wished he would have kept himself in check a bit more. Gangstarr’s vocal part of the equation Guru sounds more comfortable cooperating with DDBB. Chuck D gets the honour of performing the explosive opening act, and Guru gets the contemplative closing act. “Inner City Blues (Make Me Wanna Holler),” with its dilligent bass guitar backbone, and sorrow trumpet sounds, gives the man behind two Jazzmatazz albums a mood and theme he feels comfortable with:

“And this is the moment when the tables will turn
The lies, the myths and the favours will burn
And that which is pure will then shine through
So it’s time to leave the negative thoughts behind you
Inhale, and breath the good air in
Exhale, release some purities within
If you don’t stand for something
You will fall for anything
Let’s see what this new day brings”

Wise words and a great way of concluding your own take on an album which is so widely admired. I credit the band for not trying to replay Marvin Gaye’s most personal musical diary. They kept the original arrangements intact, but made absolutely sure the New Orleans voodoo of the Dirty Dozen was blended in. These seasoned musicians have dealt with covers before, and know how to hold onto their own sound without losing sight of the original songs. Some compositions get extra value because of that quality. “What’s Happening Brother,” with guest vocals by the inspired soul diva Bettye LaVette, is without question an equal to the original song. LaVette’s ripe voice is not to be compared to Marvin Gaye’s way of singing, but her heartfelt vocal presence give his words a golden glow. It is eerie how up to date Marvin’s words still are. Unlike the two MC’s, LaVette stayed true to the original lines:

“Hey baby, what’cha know good
I’m just gettin’ back, but you knew I would
War is hell, when will it end
When will people start gettin’ together again
Are things really gettin’ better, like the newspaper said
What else is new my friend, besides what I read
Can’t find no work, can’t find no job my friend
Money is tighter than it’s ever been
Say man, I just don’t understand
What’s going on across this land
Ah what’s happening brother
Oh ya, what’s happening my man”

Although the original song is about a Vietnam veteran struggling after his tour of duty, every single line has a direct link to the present situation. Iraq versus Vietnam, the inequalities uncovered by Mother Nature: it almost seems like nothing changed.

When Marvin Gaye first released “What’s Going On?”, the impact of his thoughts on the world were considerable. This record will not have the same lasting imprint as the original album had, but the intention is exactly the same as it was three decades ago. Expressing their concern, frustration and anger about what happened to their beloved hometown without losing their trademark frivolous musical magic is an admirable accomplishment. Playing cheerful tunes after so many death and despair is after all a time-honoured New Orleans tradition.