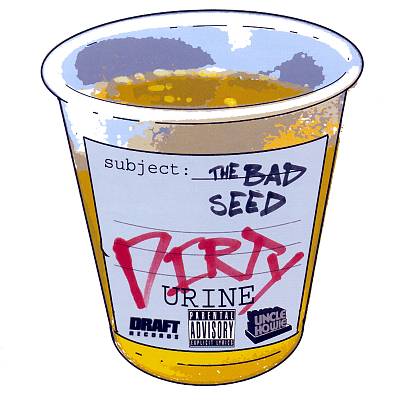 Rawkus Records was huge back in the day, not so much today. See, today I could care less what group they’re pushing, but back in the day me and 1000s of other fans would pick up albums from artists based purely on appearances on any of the label’s projects. Bad Seed got more than a mere appearance as the label released his EP/Single “Uhhnnh.” Of course, as was the case with Rawkus a lot of the time, fans were disappointed as a proper album never came from the rapper. Excitement was met with further disappointment when Bad Seed was signed to Warner Brothers after his departure with Rawkus but still saw no album release. Thankfully, in the year 2006 independent East Coast hip-hop is still alive and well and Bad Seed finally gets his chance to shine thanks to Draft Records (current home to Jin and Ill Bill). “Dirty Urine” doesn’t disappoint in the sense that it would in real life. See instead of a unpleasant surprise, this “Dirty Urine” delivers exactly what fans would expect from the rapper.

The album actually starts out with the weakest track, as the Midi Mafia produced “Show Me Love” is nothing more than another uninspired dirty south club anthem. To Bad Seed’s credit, it sounds no worse than anything else found in a crunk megamix, but you know the man can do better. “Coldest Winter Ever” immediately follows and on the other hand is the album’s strongest track as Screw Face drops a slow, menacing track and Bad Seed drops what can best be described as a rainy day banger:

“It’s a cold world, cold world, can’t even trust my own girl
Money talks, bullshit run laps around the whole world
Why it’s July and it feel like December?
And it feel like February when it’s only September
[..]
It’s the coldest winter ever, I ain’t into leather
[..]
Kids with guns, go to school
Pull em out, show they friends
Accidentally shoot they friends
It’ don’t matter who they friends
Shit is nervous, who deserves this?
Is God doing this on purpose?
I don’t know, but ain’ no such thing as picture perfect
[..]
It’s the coldest winter ever, I’ma steal the leather”

“Another Day, Another Dollar” would sound like another money anthem, but instead Bad Seed spits a sad tale about a child caught in the crossfire of the drug game. “Black Music” finds Seed paying homage to his music, both old and new school. “Move Em Out” is the obligatory crew track, but thanks to a pounding beat by Big O and dope strings courtesy of Miri Ben Ari, this track is the certified banger “Show Me Love” should have been. “Lil’ Voices” is a collection of stories about children who suffer from abuse and abduction and finds Seed at his best stating “Everybody worried about the Benzs and Rolls Royces, but I’m worried about the lil’ voices.”

By this point, two things are obvious:

1. Bad Seed is a dope, dope story teller.
2. Bad Seed excels at addressing new and different issues and putting a twist on old ones.

So what, if anything, is wrong with “Dirty Urine?” Nothing really, except 1 too many tracks by Midi Mafia. Besides the disaster that was “Show Me Love,” Midi Mafia actually makes two positive contributions to the album. “Hold You, Touch Me” is an obvious ploy for radio play, but the smooth, danceable beat works. If it wasn’t for a singer on the hook who can’t sing all that well, it might have reached its goal. The other contribution is the amazing “Seed.” While Bad Seed does shout out his own name on “My Name Bad Seed,” “Seed” is Bad Seed’s letter to his unborn child. The flip is that Bad Seed’s child stays unborn due to an abortion. It’s a deep and heart â€“wrenching track which I hope is a testament to Bad Seed’s insight and not his personal experience.

While I risk playing out the urine analogy and I understand some probably feel the analogy should have never been played in the first place, Bad Seed’s album is much more like scoring clean on a urine test. See after a long wait and much apprehension about how Bad Seed’s debut would actually turn out, fans are rewarded with a positive result, in this case a dope album. “Dirty Urine” does have a few weak moments, and Bad Seed could benefit from being a bit more optimistic at times, but otherwise there’s not much more to ask from the man. The album definitely is relevant and thought provoking, but is balanced by Bad Seed’s wit and dope punch lines. The production is for the most part solid and very soulful, fitting Bad Seeds insightful approach. Usually the purchase of dirty urine would lead to a beat down for the seller, but in this case Bad Seed’s contaminated mind will surely make a positive impact on all that purchase.