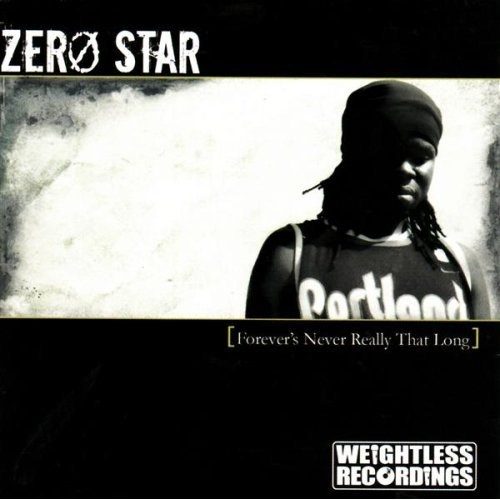 It is truly a pleasure that my inaugural review is covering an artist that hails from my very own hometown of Columbus, Ohio. What’s particularly refreshing is hearing a quality rap act in a city that is littered with mostly emo music, or hardcore metal. Now that Chicago and Detroit have made major moves by kicking in the door for the Midwest, it’s time for the Buckeye state to get some shine. Here to stake that claim is a 24 year old by the name of Zero Star. His ability is definitely more synonymous with ‘Star’ than ‘Zero’.

To be fair, some of Zero Star’s cohorts had already laid him a pathway of success. The head of Weightless Records, of which “Forever’s Never Really That Long” belongs, is none other than Blueprint. Blueprint is an emcee/producer that has already has some independent classics under his belt, most notably along side RJD2 to create the group Soul Position, who dropped, “8 Million Stories.” They certainly have the Blueprint to make quality hip-hop albums.

Despite the bulk majority of the production on “Forever’s Never Really That Long” being handled by Blueprint, this album is a one man showcase of a bright young man’s ability to express his feelings in the cypher. The album has a genuinely cohesive message on a conscious tip that urges change and shows great sadness for a constant lack thereof.

After a soulful instrumental intro track, Zero Star introduces himself with the aptly titled and triumphant song, “Hello.” It starts off with a larger than life trumpet-infused battle-type of sound that belongs in the soundtrack to Star Wars. Before Zero Star makes his dynamic presence known it switches into a rollicking beat that is back dropped with a synthetic drum, then he drops two very good verses, this being the second:

“Hello” is a great introduction to a hungry artist because many of the lines explain Zero Star as a man caught in a life struggle, while many other bars explain his passion for hip-hop music. It is also good enough to make a listener want more, as Zero Star sounds like a deeper voiced version of a poised Planet Asia, something that is difficult to complain about.

Zero Star has two completely different mentalities on this album. The vicious dichotomy can be best shown between the pessimistic track “Never Enough” and the highly optimistic “Help Is On the Way”. However, it works because it embodies the personal struggle that many find themselves in, dealing with rough situations. It’s just a matter of the right choices and the positive mentality prevailing in order for troubled people to succeed. Zero Star proves that he is determined enough to dig himself out of the consuming hole that is the ghetto, as “Help Is On the Way” proves to be the stronger of the two cuts. Blueprint blesses ‘Star with a beat, featuring a low bass tone that bridges into a peppy piano. Zero Star is equally peppy and full of jest when he drops these refreshing lines:

“It’s like 24 years ago I’m out of this lifetime
I can tell you once I probably walked in a right line
24 beers ago I’m back in my right mind
But now I’m feeling fresh again and flyer than fuck
Catch me walking past a dope chick, I’m eying her up
I spit for a minute and hopefully I’m tying her up…”

It’s just a breezy joint that anyone can enjoy bumpin’ in their ride. It also must be mentioned that anyone from the Ohio State campus area knows the phrase of a homeless man that repeatedly utters the phrase “Help Is On the Way” while begging for change from every student passerby. Almost assuredly, Zero Star knows of this celebrated and highly mimicked rapping bum.

Other highlights of the album includes a rock-inspired anthem entitled, “Two-Way Street” and, more importantly, a storytelling track about a girl caught in a deep world of violence and sexual abuse in “Stress 101.” The track is easily the most concerning on the album, but it is another one that can be greatly applauded for raising awareness, akin to Ludacris’ new single “Runaway Love,” or the Nas track “Black Girl Lost.” And to prove that Zero Star isn’t just using this sentiment as a gimmick he continuously proves himself with messages of great emotional depth, including at one point reciting a Harriet Tubman quote, “I could’ve freed thousands more slaves, if I just could have convinced them that they were slaves,” on the album’s outro.

Though overwhelmingly solid, this LP is not without missteps. “The Cycle Remix Pt. 2” has some truly awe-inspiring lyrics about death, Marvin Gaye, and Jimi Hendrix, but they are drowned out by a snappy distorted beat. This is especially noticeable because Zero Star sounds as if he is a mile away from the mic on this track, essentially making it seem like a mixtape song on an otherwise professionally pressed album. Then, the beat on “Concrete” that sounds like the gobble noise in Pac-Man and “Catch Up” featuring Blueprint are both anxiety inducing by being overly aggressive. The latter is particularly disappointing given that it is the only official collabo that Blueprint rhymes on. Zero Star is at his best when he takes his time to spit his well-written rhymes about the struggle of the day-to-day over soulful backdrops.

To conclude the album “Forever’s Never Really That Long,” Zero Star raps some creative shout-outs to his inspirations; Mos Def, Ras Kass, and Redman are amongst them and continues nearly acapella about the dying state of hip-hop music. Zero Star will soon realize that he is an inspiration in his own right, by breathing fresh rhymes that can only help revive hip-hop music like the heroes he mentioned have. Being that I am from Columbus, it is no surprise to me that he is locally listed as one of the top musicians to watch for in 2006. Blueprint once rapped on a Greenhouse Effect album, “My favorite things include hip-hop crowds that ain’t biased.” Well, you don’t need to rely on bias if your crew is so raw and dope. Two ingredients that transcend what coast a listener is from, or what region of the United States they call home. It’s ironic that the crew occupying Weightless Records carry so much weight, thanks to a strong new addition in Zero Star.