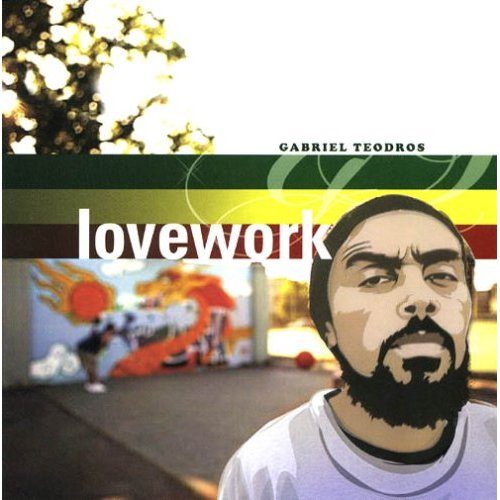 At first glance I would have guessed that Gabriel Teodros hailed from the ever popular country of Brazil, given his first name and the prominence of the colors green and yellow on his album cover. But a closer inspection also reveals the color red which opens up the possibilities as that tri-color combination is extremely popular for flags. Eventually Gabriel Teodros reveals himself to be of Ethiopian ancestry which makes this review appropriate given that country’s recent explosion into the international news. But of course, few people really care about an emcees national origin and it really doesn’t matter when it comes to whether a rapper is dope. I do have somewhat of a soft spot for the Ethiopian culture given that one of my closest friends hails from the country, but luckily Teodros doesn’t need my bias to get props. Though Teodros music is probably too laid back and social to reach universal appeal, he’s got enough going for him so that it’s quite possible he’ll become a hit on the underground circuit.

“Sacred Texts” starts things and Teodros pays homage to the musical “texts” that have inspired him throughout, from early soul to present day legends like Tupac and Biggie. Given the way Teodros presents his album (from the cover you can’t tell whether he raps, sings or does something in between) it’s almost essential that he hit us with a strong hip-hop connection from the start so that we’ll continue listening. “Do U” is an anthem promoting each to do what they feel defines themselves as Teodros proclaims he’s just a b-boy doing what he wants but that he’s not much different that the D-boys who do what they want. It’s an admirable notion, but sadly when it comes to what’s “cool” there is a big difference between “ballin!” and being positive. “Beautiful” is another uplifting anthem urging everyone to recognize their beauty and be proud of themselves. Once again it’s obvious that Gabriel Teodros has nothing but a positive message but he’s getting close to being too corny with it. There is definitely a need for more positive rap music and for said music to hit the mainstream, but at the same time track after track of it comes off a bit cheesy and is hard to digest for the average rap fan.

“Sexcapism” exhibits another problem with the album as the song titles don’t immediately connect with the song context. Call me old school, simple-minded, or both but I usually prefer the song title to show up in the hook or relate directly to the music. “Sexcapism” is about Teodros relationships with women but I’m not so sure what he was going for. He hints at groupies at one point (I guess even conscious rappers get groupie love) and at another point he mentions being “scared of women” but over all I’m not sure what the point of all this was. The same goes for “Raccoon Rock” where nowhere on the track do we actually hear the words “Raccoon Rock.” We do find Teodros and Toni Hill trading verses about teaching the youth to believe in themselves and repeating that they have “a lot of work to do.” So what am I supposed to take from the song title? Are Teodros and Toni Hill criticizing current rap music by calling it “Raccoon Rock” alluding at the derogatory term “coon?” Or am I reading way to deep into this? Is there some characteristic of the raccoon that they are trying to instill into the youth? Maybe their resiliency even when urban landscapes overtake their natural habitat? Were they stoned and watching “Over the Hedge” before they came up with the title to this track? I mean I know they were most likely going for the first option, but it seems unnecessary to go through all this. Next time just name the damn track “We Got Work To Do” and not only will heads be more likely to tune in, they’ll actually remember the name of the song when talking about it later.

Despite the criticism, “lovework” is a decent album if you’re looking for a lot of positive vibes. There are definitely a number of tracks worth peeping, from the biographical “East Africa” to the number of repetitive, but noteworthy, conscious tracks. While the laid back musical vibes maintain a nice consistency, Teodros succumbs to the same pitfalls that plague the mainstream rap arena. Just like we can get tired of hearing about flossing and balling track after track, it gets tiring to hear about changing the world and becoming more positive for an hour straight. Next time around a more balanced approach would serve Teodros well and probably earn him more fans. As it stands if you just signed up for Habitat for Humanity and need some background music, “lovework” should provide the perfect soundtrack for your selfless work.