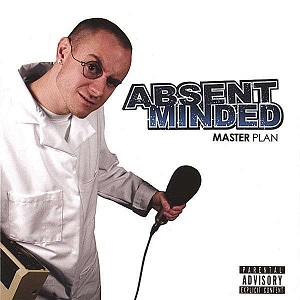 Producer, rapper, and head of the LOD Development record label Absent Minded is from Toronto, Canada. This was my first foray into Canadian hip-hop, and I didn’t really know what to expect. From looking at the cover of Absent Mindedâ€™s debut album, which features the rapper wearing a lab coat and monocle, I figured this would be just another Eminem clone. As it turns out, I was only half right.

Yes, Absent Minded has obviously listened to an Eminem album or six. His slightly whiney flow and mischievous fuckup persona owe a clear debt to Mr. Mathers, as does his celebration of inebriation. However, while clearly inspired by Eminem, Absent Minded manages to differentiate himself in his beats, and by being less pathological than the Slim Shady character.

Absent Minded took the “write what you know” maxim to heart. The songs on this album are all about women, rapping, and getting drunk. He doesnâ€™t try to pretend heâ€™s a thug, he doesnâ€™t floss, and he keeps his boasting limited to his skills on the mic and prowess with the ladies. Absent Minded it at his best when he is expounding on his sexual skills, like on “Call You Up”:

Absent Minded isn’t a genius on the mic, but he holds his own for the most part. His good-natured celebrations of partying and getting laid are fairly infectious, if not necessarily ground-breaking. However, he drops his share of clunky rhymes, and occasionally affects a forced flow that didn’t work for me. I also wasn’t into the dancehall influence that is all over this album. I realize that there is a heavy Caribbean influence in Canada, but it just reminded me of Snow.

I was much more into the beats on the disc. The production throughout is crisp, clear, and efficient. Since Absent Minded is inspired lyrically by Eminem, it makes sense that he is inspired sonically by Emâ€™s mentor and producer, Dr. Dre. Every note is in place, without a lot of filler or clutter. The title track even sounds like Dr. Dreâ€™s “Whatâ€™s the Difference”. Absent Minded also does an excellent job of incorporating acoustic and other mellow elements into his tracks without making the finished product sound lightweight. For an independent album, “Master Plan” has a very rich, full sound; these beats were definitely not hastily made on a crappy keyboard.

I don’t know if Absent Minded is going to make Toronto the new Houston or Detroit, but it is a decent album. If you are interested in seeing what our cousins up North got going on, check out “Master Plan”.