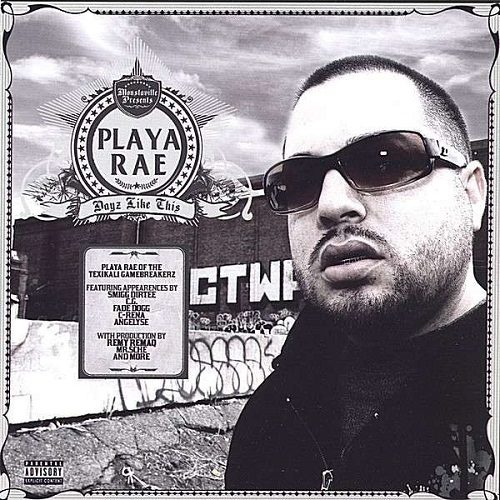 Playa Rae is a relative newcomer who has been trying to hit the mainstream for well over 2 years. His biggest break came two years ago when he teamed up with Texas rappers Fade Dogg and Gemini for the Gamebreakerz album. The project was touted as a super group of sorts, bringing together some of the hottest up and coming Latino rappers from Texas and California. I was familiar with Fade Dogg and Gemini, but copping a few local mixtapes throughout the year will make you familiar with almost every aspiring rapper in Texas. The Gamebreakerz CD didn’t really pop things off for anyone involved so Playa Rae is back on the grind putting out a solo CD and hoping to break the curse that hangs over Latino rappers.

I’m not being melodramatic or biased when I say it’s hard out there for a Hispanic rapper. For whatever reason, the Hip-Hop and Latino audiences find it hard to embrace Latino rappers. Acts like Mellow Man Ace and N2Deep were seen as a novelty when they dropped. People seem to dismiss them as “Hispanic” rappers and don’t take them too seriously. The Chicano rap movement certainly hasn’t helped things as those rappers seem content to play up their Latino roots in order to tap into a niche market. The only Latino rappers who blew up in a major way were Fat Joe and Big Pun. It’s a catch 22 for these guys. They can’t play up the Latino thing too much as they risk being seen as a novelty, but at the same time they can’t ignore it as they’ll be seen as sell outs. It’s no wonder that many Latino rappers, including NORE, had to turn to Reggaeton when it was hot to express their culture.

Playa Rae attempts to walk the fine line between sell-out and novelty on “Dayz Like This” and succeeds. After listening to the album you’ll be aware that the man is Mexican, but that’s secondary to the fact he’s a rapper and he’s got a story to tell. His story can be a depressing one, but has enough hope mixed in to keep you interested. Hailing out of San Jose, Playa Rae’s production favors the funky grooves of old school west coast and southern gangsta rap. The production is almost exclusive handled by in house producer Remy Remaq, but we do get one track from Mr. Sche. The album starts out strong with “Dayz Like This” where Rae reflects on the past but looks forward to the future:

“They say to live life and never let it live you
And stay true to you is something that you gotta do
But momma don’t understand the times we living in
Cause now here baby boy is driven by the dividends
The world is so fast, and it gets so cold
I’m just a hustler with a dream, man its hard to cope
I should of went to college, I never had the time
Cause by the age of nineteen I was facing time
I never did it though, and ain’t ashamed of it
A lot of suckers talk about it for the fame of it
But that ain’t me homie, I’m just a humble man
And never told to falsify just for the man
I keep it real man, one hundred percent
I know the streets still love me, I get my respect
Being every bit of the man I was taught to be
A damn soldier to the struggle, ain’t no art to me”

Playa Rae isn’t an impressive lyricist, but he has a solid flow/voice and comes across as very honest on record. He mentions Guerilla Maab as one of his favorite groups later in the album and his no nonsense reality rap is clearly influenced by the Houston vets. Struggling to triumph in the face of adversity is the running theme throughout the album. “Through It All,” “Am I Askin A lot?,” “One Deep,” and “When I’m Down (Drama)” all have the same message and mood. When Playa Rae isn’t playing up being the gangsta rapper with a conscious he’s crafting hustler’s anthems. “So Damn Coo” and “Hustlaz Prayer” are the highlights of the hustling songs. “So Damn Coo” features slept on Smigg Dirtee and sounds 50 Centish both musically and lyrically. The Mr. Sche produced “Neva Change” is dope to me as I am a fan of the man’s work, but the David Ruffin sample has been overused.

Overall, Playa Rae’s debut album is a solid showing. There’s not too much party rap or club music, save for one failed anthem (“S-O-U-T-H-B-A-Y” missed the mark entirely). His work clearly has a Texas influence both in sound and in content as many of his songs evoke the spirit of rappers like Trae and Z-Ro. The only problem is that lyrically Playa Rae is a few steps below both men making it difficult for his music to rise above average. Therefore, if you love rap in the style of Guerilla Maab, Playa Rae will definitely fill the space between Trae and Z-Ro albums but he won’t bump them off your playlist.