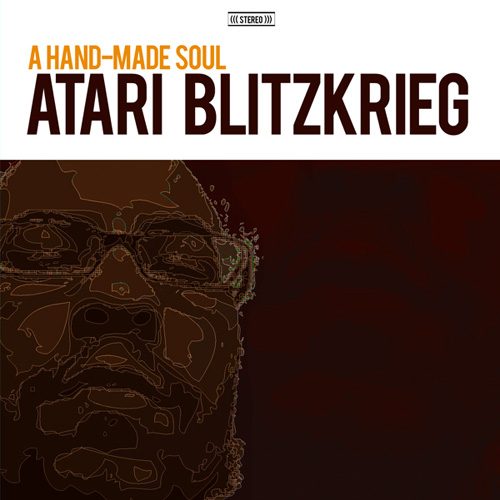 Atari is nothing more than a brand name for a company that currently publishes video games, but 25 years ago was on the cutting edge of video game hardware. Blitzkrieg is a German term for a fast and vicious war or attack. Put those terms together and you really don’t have anything that makes sense. I won’t speculate on the meaning of Atari Blitzkrieg’s name, but with that moniker and albums/singles with the following titles:

The man can not blame me for expecting some weird stuff from him. As it turns out, Atari Blitzkrieg’s fondness of odd names doesn’t make his music strange. Features from Sadat X, Rack-Lo, and Agallah make Blitzkrieg even more accessible. While I can tell you Atari Blitzkrieg isn’t the next incarnation of Kool Keith, when I say so it’s both a compliment and criticism.

The first thing to note about “A Hand-Made Soul” is the production, provided by Khrome who also is the head of Godsendant Music, the record label responsible for this release. Khrome single-handedly puts the “soul” in “A Hand-Made Soul.” He’s a skilled producer with a knack for soulful, but hard samples. “Birth of a Blitz” blasts into your speakers with blaring horns and a funky beat. “Time Moves On” recycles a bass line used by the Wu, but flips the melody with a sweet voice sample. Basically, the beats are on point throughout. The music is nothing extraordinary, but definitely solid. Atari Blitzkrieg on the other hand is the weak link in the process due mostly to an awkward flow. It is harsh and blunt to say this, but the man could benefit from refining his skills. Simply put, he tries to fit too many words in a line and it makes it hard to understand what he says. It doesn’t happen on every line, but it happens enough for you to notice. Sure, guys like RZA have made a career of stumbling all over a track, but Atari Blitzkrieg doesn’t have the style to carry it. That said, the awkward flow doesn’t ruin the CD as Blitzkrieg puts together some good songs. “Sight” is a funky but introspective number:

“Her nose up at those needing her help
With a look of disgust for those waiting in wealth
Put yourself in their shoes, sometimes it’s complex
Alcohol doesn’t always end checks
Doors close on the life that you knew
A diploma in hand, your chances are few
Whole jobs outsourced for less cash
For a man feeding five now out on his ass
Tossed with the trash, no work to be found
Government assist, the upper class frown
Eyes looking down, I’m labeled as a leech
Promises made, not promises to keep
It’s a battle continually lost
They want a free nation, yet at a cost
Bring on the target, expect to uplift
Maybe when the tide shifts”

As you can tell, the man has a good message and good lyrics, just a little hard to understand at times. Other songs worth mentioning are “Manic Compression,” “Time Moves On” and “Birth of a Blitz.” “Birth of a Blitz” is also the intro and finds Blitzkrieg dropping stream of conscious verses about everything and anything. “Time Moves On” features Sadat X and serves as the album’s single. Sadat X really steals the show. “Manic Compression” features a vicious hook by Agallah and deceptively uplifting beat.

Overall, “A Hand-Made Soul” is a mixed bag. One the one hand, the production is strong and the guest features are good. On the other hand, Blitzkrieg leaves many things desired when it comes to an emcee. His lyrics are on point, if a little heavy sometimes, and his voice doesn’t take away from things, but his flow just keeps him from having a big impact. Blitzkrieg is not Kool Keith when it comes to strangeness, but he is also no Kool Keith when it comes to rhyming skills (like him or not Keith has skills). Those looking for a soulful sound, heavy lyrics and don’t mind the rapping could do much worse than this. Others would be wise to check for albums where Khrome does the production, but might want to pass on this one.