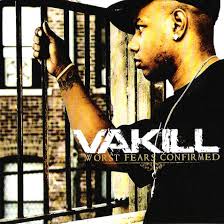 On “The Darkest Cloud,” Vakill sounds like a potential, albeit limited, Great â€” excellent wordplay, punchlines, a solid but undeveloped delivery, and a few original ideas (“Sweetest Way to Die,” especially) thrown against some fine production… that is, production obviously in tune with Vakill’s style, and Vakill’s needs. In short, his debut is grim and witty â€” the first a personal preference of mine, which has no bearing on the score I gave it, and the second, a staple. Art cannot get by without some kind of cleverness, or something similar in spirit, and, to his credit, Vakill has a lot of it. But, much was disappointing: his concept tracks, with a couple of exceptions, were not great, and he rarely showed great depth, or even nuance in his lines. Indeed, wit can only take competent art so far â€” to technical excellence, wrapped in a string of stipulations. And, to perpetuate the qualifiers: his debut recalls some of the best rappers in the history of the genre, but.. in a faint, barely crystallizing sort of way. It’s like those titles resist him, firmly but apologetically. Three years later, Vakill’s ambition is, at least according to Vakill, even greater:

I suspect he’s misjudged this time around. At least something artistically terrible is instructive â€” I could go on for reams on why a given dime-a-dozen rapper has no talent, and cruelly point to every sloppy line and unexploited opportunity, but “Worst Fears Confirmed” is just innocuous. No risks, just something dull and uneventful on each track â€” the conceptual material is mediocre, the wordplay virtually non-existent, and the production too lush for Vakill’s style. And, although his delivery is slightly more sophisticated, and the production, while at times appropriate, or slightly more consistent, especially as stand-alone instrumentals, it’s not enough to save the sum. In art, the gestalt â€” not individual parts â€” still reigns as the be-all bottom line. Of course, it’s an uncomfortable trade-off â€” although “Worst Fears Confirmed” lacks those glaring low points, nothing stands out; it’s mostly bland, with an occasionally spectacular beat to help things, but not necessarily Vakill, out.

As if it’s bowing to this kind of criticism, the title track sums things up quite well. A throw-away hook, solid but unmemorable lyrics, and too much of that “smooth” stuff â€” obviously, the Molemen went from gritty beats to complex instrumentation, including warps, violins, and a light tonal keyboard. It’s still dark, and even complements Vakill’s style, but it’s clear he works better with rougher, fuzzier beats, especially if they expressively punctuate a certain line, or focus on the exploitable bits of his delivery. There is no such nuance (or salvaging) here. Instead, both emcee and production compete for my attention. Is that necessarily a bad thing? No; if something especially stands out, and is handled quite well (e.g., “Accordion,” on Madvillain’s theatrical “debut”), such competition can actually sharpen the qualities of both â€” discord makes stuff obvious. But, it’s just not the case here. Musically, “Acts of Vengeance” is an exception to the above. A dramatic violin, a warped, metallic ringing… it’s perfect, at least for atmosphere. As rare as it is, it’s a type of lushness that complements his voice quite well. But, Vakill can’t even meet the beat half-way:

“A neighborhood cornerstone who made his presence felt
Never took credit, always said “God’s blessings helped
I’m just the instrument,” he’d say, “God’s the musician â€”
He’d help bring dreams of finding jobs to fruition”
Then a six year old girl was killed in a crossfire â€”
Block got hot, made the price of the coke go higher
‘Cause pastor took action, waging a war on drugs
With vows to clean up the hood, that he swore on blood â€”
Three days a week, the ‘hood is led by this prophet marchin’
Dope man’s pissed because it’s affecting his profit margin…”

And so it rattles on, for another two minutes, practically without purpose. It’s competent, but empty â€” in fact, it’s even surprising that in such a potentially deep narrative, there’s not one striking line, image, or idea; it’s all too predictable, especially for a track that’s garnered praise even from overwhelmingly negative reviews. Consider: the community preacher “never took credit,” praised God, “swore” vows “on blood,” like a “prophet marchin'” â€” a string of clichÃ©s, and a few rhetorical questions, thrown in, I’d assume, to feign profundity in the face of blatant dullness. It doesn’t throw me off, not exactly. Instead, I hear someone quickly running out of ideas. In all, it’s a mixed bag, with little to recommend, although, as an innocuous, inoffensive record, there’s even less to hate, and some savory production. But, don’t let that lower your standards â€” look for something unquestionably good, not something to stomach.