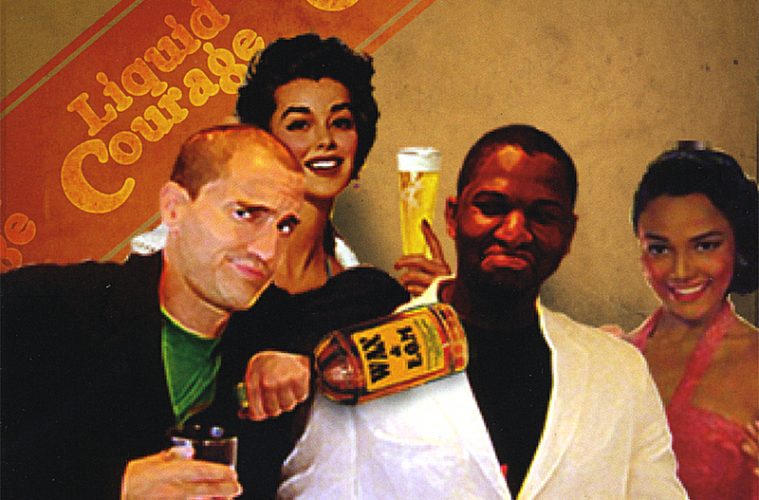 Like the Cool Kids, Tanya Morgan, and several couples I know, rapper Wax and producer E.O.M. met over the internet. Originally they recorded “The Adventures of Larry and Tina” as a one-off. The song tells the story of a 39-year-old divorcee who falls in love with a 19-year-old stripper, only to have his heart broken. The track showcases Wax’s singing abilities along with his command of storytelling, and the E.O.M. beat is catchy and melodic. You can find the video on YouTube, and if you go to their Myspace page, you can catch Wax performing it live with an acoustic guitar. It’s a pretty brilliant song, and they realized that there was a lot of potential in their budding musical relationship. They decided to keep recording, and the result is the 17 tracks that make up “Liquid Courage.”

Wax is a clown in the vein of Ad Rock, rapping about getting drunk, tossing off insults, making dirty jokes, and advising you to lock up your daughters. He’s clearly done his time watching porn and hanging out in strip clubs, and proves it on tracks like “Last Result,” which is about the nastiest girl in the club. Wax has too much talent to waste it all on obscene jokes and stories about fat strippers, and thankfully he has a serious side. He deals with his struggles with alcoholism on “Music and Liquor,” gets positive on “It’s All Love,” and gets romantic on “Sunday In the City.” He follows that track with “Summer In the City”, using the Lovin’ Spoonful song as a jumping off point to talk about being mugged:

“The passenger seat of the car, someone jumped out from it
And in two seconds flat I had a gun to my stomach
It was clear to see what he wanted
He said “give me all your money”
If I had had some I would have done it
And by this time his boy had jumped out of the back
They were both searching me and threatening me and shit like that
The second dude got pissed
Threw my empty wallet on the ground and said “is this all you got, bitch?”
I was scared as fuck
I’m not fronting
Cuz I know in L.A. people get shot for nothing
These dudes were real young
Sixteen maybe
And they’d probably kill me just cuz the shit seems crazy
And they wanna seem cool to their friends at school
Bragging to other kids how they smoked some fool”

He escapes with a punch in the face, “feeling like I’d been shit upon.” The song highlights Wax’s greatest strengths as a rapper: his ability to tell stories, and his bare-faced honesty. He uses simple but effective language to precisely describe an experience. The listener knows exactly what Wax is going through with the gun in his stomach, pissed that these kids are taking his money, and well-aware that they are stupid enough to shoot him over nothing. Wax also busts out some impressive guitar work on that song and several others, proving that he has more to offer than just spitting rhymes.

Wax’s storytelling and potty mouth reminded me of Eminem, his use of one-liners reminded me of Lil Wayne, and his honesty in dealing with his personal failings and alcoholism had me thinking of Slug from Atmosphere. Atmosphere probably comes closes to the spirit and sound of Wax and E.O.M., pushing the boundaries of hip hop production, and putting the focus on lyricism over flossing. Wax’s serious moments are a nice balance to his humor; his in-your-face smart assness is funny, but can be grating. Also, while his singing on “The Adventures of Larry and Tina” works well, his off-tune screaming on “Solidify” and jokey chorus on “Tongue Tied” doesn’t, and are further examples of how his clown persona can work against him.

Wax has found a worthy partner in producer E.O.M. Like Wax, E.O.M. is a multi-dimensional artist. He is clearly a consummate crate-digger, and a lot of his beats are constructed around dusty breaks. He samples jazz on “Sunday In the City” and “What’s Your Name?,” psychedelic rock on “Solidify,” and an opera choir on “Air Timpani.” “Air Timpani” proves that he can turn the most unusual samples into a banging beat. E.O.M.’s beats tend to be very musical, which works very well with Wax’s guitar playing and singing.

“Liquid Courage” is a strong debut by a promising group. Perhaps they could have cut a few of the 17 tracks here, but the album shows an impressive range of themes, styles, and emotions. Like Company Flow, Wax and E.O.M. are independent as fuck, and they give the middle finger to the record industry repeatedly on the album. With product this good, they don’t need major label support, even though they deserve it.