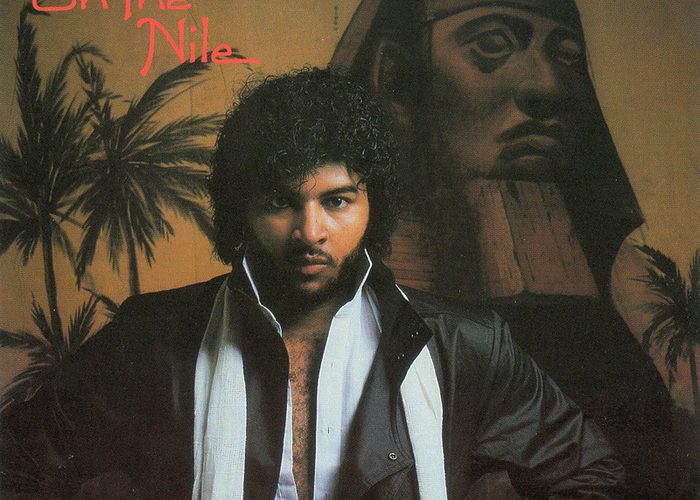 Egyptian Lover :: On the Nile

My friends and I used to breakdance to Egyptian Lover’s “Egypt, Egypt” on the playground of Valencia Elementary when I was nine. Back then, in 1984, the music sounded impossibly futuristic and cool. It fit in perfectly with the glamorous chrome-and-neon world of Miami Vice, which I watched religiously every Friday night. Then 1985 hit, breakdancing went out of vogue, and the Egyptian Lover fell out of my conciousness. The music that sounded so new and cutting-edge in 1984 sounded corny and dated just twelve months later.

It wasn’t until the mid-nineties that I revisited the Egyptian Lover. My friend had a vintage cassette in her car, and we would cruise around pumping “Egypt, Egypt.” As was typical in the nineties, we approached the music with irony. We laughed at his jheri curl and sultry gaze on the album cover, and made fun of the primitive beats and rudimentary rapping on the record. Then she got a new stereo, without a cassette player, and once again I forgot about the Egyptian Lover. I was reminded of him last year, as everyone from Black Milk to Kanye West to Common started delving into their old electro records for inspiration. All of a sudden the 808s and futuristic blips of Afrika Bambaataa and Egyptian Lover were being recycled and reinvented for the new milennium. I decided to give “On the Nile” another spin to see how it held up a quarter-century after its release.

Before you put “On the Nile” on your stereo, it’s worth remembering the technical constraints the Egyptian Lover was working under. What he was doing in 1984 was cutting-edge, and the equipment was clunky and hard to work with. That is on top of the fact that early hip hop DJs and producers were basically inventing a new musical language. So it is not going to sound as polished as something put out today on much better equipment. The beats are pretty basic and straight-foward, perhaps a result of both undeveloped programming skills and audiences who weren’t ready for anything that strayed too far from four-on-the-floor disco.

Greg “Egyptian Lover” Broussard was a DJ, and as a member of Uncle Jamms Army became part of the burgeoning L.A. hip hop scene. “On the Nile” was his first and biggest solo record, following a string of 12″ singles. His background in hip hop and as a DJ is clear from his rhyming style. “What is A DJ If He Can’t Scratch” borrows heavily from Melle Mel and Kurtis Blow’s rap style, right down to the “baby” at the end of the verse. It’s simple party-rocking rap, the type that worked great at parties but doesn’t translate so well outside of the club. “And My Beat Goes Boom” is similar, with Broussard kicking his old school flow as he brags about being a ladies’ man. Both of these tracks are interesting documents of early hip hop, but don’t really stand up twenty-five years later.

Time has been kinder to “Egypt, Egypt.” Sure, the drums sound janky, and Broussard’s rapping is unsophisticated, but he still sounds cool and, dare I say it, sexy. He drops the East Coast braggadaccio rap to do something a little slinkier and detached, and it works. This, along with “Planet Rock,” was one of the templates of electro: the heavy breathing, the robotic voice, the electronic pulses, the clattering beat, the 808s. This is the sound that the Black Milk has resurrected, that Kanye has embraced, and that has caused Common to forsake his concsious fans. Like flourescent clothes and Ray Bans, electro is suddenly new again.

Like Bambaataa, Broussard was influenced as much by European electronic artists like Kraftwork as he was by American hip hop, and that is one of the strongest points of “On the Nile.” The Euro influence adds darker tones to the music, further distancing electro from the disco and funk that had been so central to hip hop. This in turn allowed hip hop a much larger musical palette to draw from. You wouldn’t have a Timbaland or Neptunes today if artist like Bambaataa and the Egyptian Lover hadn’t made it ok for hip hop DJs to expand beyond funk, disco, and jazz breaks. “I Cry (Night After Night)” is an example: it is a moody song that maintains a sense of melancholy even with the cheesy electric guitar solo. You can almost picture Don Johnson cruising through Miami in his Ferrari. “Computer Love” is another dose of pulsing Euro-electronica, and it wouldn’t sound out of place booming from the Love Parade, Berlin’s yearly outdoor techno-lovefest. Prince and Rick James also influenced the Egyptian Lover. Their sexy funk and randy lyrics are all over “On the Nile,” especially on tracks like “Girls” and “Unreal.”

There is no denying that “On the Nile” sounds dated. It is a quintessentially eighties album, from the ticking beats to the electric guitars to the synth solos. In that way, the ablum is sort of like a print by Patrick Nagel, who did the cover of Duran Duran’s “Rio.” Nagel will forever be associated with the 1980s, whatever the merit of his art. It is old enough to be retro rather than dated, and people enjoy it precisely because it is so entrenched in its time period. “On the Nile” has gone from being an ironic joke to a document of a time of activator-stained jackets and neon socks, and people are finally ready to appreciate what the Egyptian Lover contributed to hip hop.