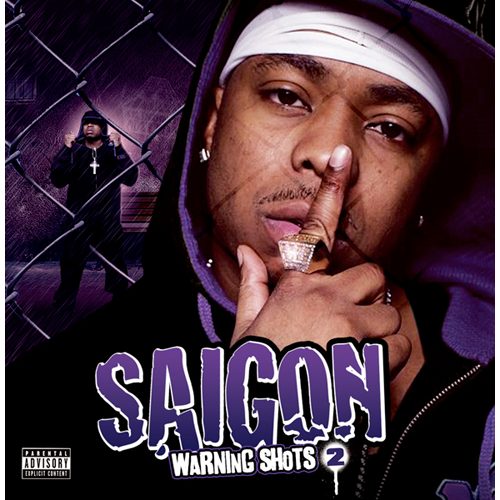 Perplexing conundrum – you’re one of the hottest rappers in all of hip-hop, yet in seven years you can’t find a label to put you on. You’re famous enough to have been a guest star on HBO’s “Entourage,” yet you’re so frustrated with the music industry you publicly announce “I QUIT” on your personal blog. You record multiple albums that never get put out, yet your name and songs are on every mixtape in the country. You just can’t stop fighting with other popular rappers in the game like Joe Budden and Prodigy, yet you’re one of the most beloved spitters out there. With this many contradictions, you could only be Saigon.

Five years after the first “Warning Shots,” album was released, an album that was supposed to be an appetizer before a main course called “The Greatest Story Never Told,” that story still hasn’t been told. Through all the drama and beef, through being locked up and being stabbed, from being in fictional TV battles to real life wars, Saigon has overcome all the drama and he’s still here. “Warning Shots 2” is not an appetizer for that long lost Saigon album, although some sources still claim it’s going to come out in 2010. For what it’s worth, this might as well be the Saigon album we’ve all been waiting for, without wasting a bunch of time anticipating something that may or may not ever happen. Instead we’ve got sixteen new songs which much like the opening paragraph illustrate the many contradictions of Saigon. On “That’s Not What’s Up” featuring G Martin Soul, Saigon delivers a heartfelt ode to his peoples, letting men know not to get caught up in crime and women not to make themselves whores:

“I see you slidin down the pole
At the same time I see the tears slide down your soul
Used to be on the honor role, your momma named you Suwanna yo
So why they call you Miss Geronimo?
Matter fact, I don’t wanna know
Gotta fuck wit’chu, it do don’t it, on the low
Gotta hurt you to be a woman who sells herself cheap
Don’t even love herself enough to develop self-worth, I peep
pimps with hoes who sold all of they hoes
Most of those was puttin snow up they nose
[…]
Don’t you wanna be a grandmomma one day?
You need to be in church this Sunday”

On “For Some Pussy” the spiritual upliftment and self-empowerment is all but gone. Saigon only wants one thing from a woman and he’ll do ANYTHING to get it.

Female fans might find the contradiction frustrating, but it’s a brilliant example of why Saigon continues to be a fan favorite. The Brooklyn based rapper and one time father of the jailyard is now a father to a daughter named Rayne Dior. Saigon knows he wants a better world for his seed, but he’s still a man driven by his needs to “dip into that pussy like some cookies and some milk.” He wants the betterment of all of his people in the street so they don’t have to do a big like he did, but on “Rusty Gunz” with Lil’ Fame of M.O.P. he bangs out a grimy crime tale like the best braggadocious gangster of all time: “You a rapper? I might have heard of you/The fuck does that mean? I murder you in that convertible.” Saigon’s admirers recognize that he brings the entire spectrum of emotions into his songs, the hate and the love, the wisdom and the ignorance, the entire yin and yang of life into his rap. That’s why even though he’s got so many stories that have never been told, the ones that are told are still totally compelling.

For sixteen songs on “Warning Shots 2,” Saigon spits that real talk, even at times when it’s real contradictory. Even though his relationship with Just Blaze has been contentious, Blaze is still working with him on songs like “Who Can Get Busy” featuring Grand Puba, which as you might expect if you know 1990’s “One For All” is a version of Puba’s song updated for 2009 over a menacing piano backdrop. Saigon doesn’t pull in a whole bunch of big names on “Warning Shots 2” though, he lets his own rap do the talking over the rolling drums of “Aye Aye Aye Nigga” and the G’d out whiny synths of “Be on Time” where the always cocksure rapper notes “what y’all call rap, I call whack.” The only downside to being this good, and this well known, is that you’d better come with sixteen full of fire 16’s on every joint. “Warning Shots 2” comes close, but as the album’s title implies, not everything here is a hit – they’re just scaring off lesser competitors. Still I don’t think anybody’s scared by the “For Some Pussy (Remix),” which was very unnecessary, and “Copping Pleas” sounds like somebody forgot to come up with a beat and the studio producer just ran his hand down the keyboard and said “rap over this as fast as you can.” Saigon is great, but this is not the greatest story ever told – just a lot of good ones and a couple of mediocre ones.