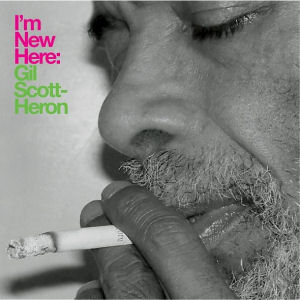 “I’m New Here” is the first new album by poet/singer Gil Scott-Heron since 1994’s “Spirits.” It is being released by XL Recordings, home of alt hip hop acts like RJD2, M.I.A., and the Cool Kids, as well as electronic artists like Basement Jaxx. The sessions started when label owner Richard Russell came to visit Scott-Heron in prison, where he was serving time for drug charges. Scott-Heron claims that his two stints in prison for drugs have more to do with him having bad lawyers rather than a drug problem. Based on his new album, he’s in much better shape than his recent tangles with the law might suggest.

The album begins and closes with “On Coming From A Broken Home,” a tribute to Lilly Scott, the grandmother that raised him:

Scott-Heron challenges the notion that a family has to contain both a mother and a father, that a child who grows up without either is missing something, that you can’t grow up well-adjusted and happy in a broken home. He acknowledges that his home wasn’t traditional, but his grandmother was such a loving, strong figure that she more than made up for any of the benefits of a nuclear family.

These song poems also set the mood of the album: reflective, melancholy, nostalgic, the sound of a man near the end of his road looking back on all that he has done, and deciding he’s done all right. The bulk of the disc is spoken word pieces, snippets of Scott-Heron reciting poetry or talking about his life, death, parenting, and accounting for your sins. “Being blessed is not just about being able to float on air,” he explains on “Being Blessed (Interlude).” I’m saying if you gotta pay for the things that you’ve done wrong, ah, I got a big bill coming at the end of the day.”

Gil Scott-Heron’s singing voice is another indication of the life he’s led. His beautiful, raw tenor has been ravaged by time, and now he croaks and warbles. The effect is similar to recent Bob Dylan or Tom Waits. It’s the ragged, warts-and-all approach of the blues versus the more refined jazz soul style he favored in the seventies. So it’s fitting that he covers Robert Johnson’s creepy blues classic “Me and the Devil Blues,” appearing here as “Me And The Devil.” This is where Scott-Heron’s partnership with XL Recordings really pays off. The label is known for the cutting-edge electronic artists on its roster, and producer Richard Russell uses trip-hop as inspiration for the album as much as blues and jazz.

“Me And The Devil” has sinister synths and a clattering drum beat that sounds like early Massive Attack or Tricky. Scott-Heron howls with all his heart, making the seventy-year-old song sound as haunting and urgent as it did when Robert Johnson first recorded it.

Scott-Heron’s cover of Smog’s “I’m New Here” is just him talk-singing over an acoustic guitar. “I’ll Take Care of You” is the song that sounds most like Scott-Heron’s early-70s work. He sings over a piano and string accompaniment, telling a kindred spirit that he knows her pain, and will take care of her if she’ll let him. It contains the raw emotion of early Scott-Heron classics like “Pieces Of A Man” or “Home Is Where The Hatred Is.”

“New York Is Killing Me” is built around handclaps and distorted bass, making what is essentially a simple blues song sound like something M.I.A. might be working on.

“Running The Crutch” and “Where Did The Night Go” are spoken word pieces over a disquieting industrial backdrop. Forty years ago, Scott-Heron was performing proto-rap, reciting poetry over bongo drums about police brutality and “Whitey On The Moon.” Now he’s talking about facing your mortality over a beat that would make El-P proud.

“I’m New Here” is a heavy experience, full of ruminations on loss, death, and family. Like Charles Bukowski’s “Pulp,” it captures an artist looking at Death in the face, and coming to terms with the twilight of his years. Most importantly, it shows an artist who has grown and matured with age, who hasn’t stagnated, and who isn’t afraid to take chances.

In the liner notes, Scott-Heron asks the buyer to listen to the CD “for the first time under optimum conditions. Not in your car or on a portable player through a headset…Get rid of all distractions (even her or him)…Turn off everything that rings or beeps or rattles or whistles…Listen all the way through. Think about what you you got.” He’s not just being curmudgeonly. “I’m New Here” is an album that is best appreciated as a whole, under optimum conditions, when you can really absorb what he is saying. It’s worth your time and your money, and stands proudly among the better works in Gil Scott-Heron’s large and impressive discography.