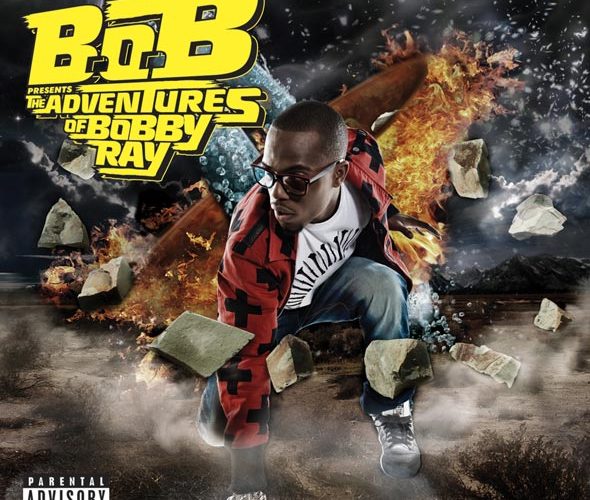 B.o.B :: The Adventures of Bobby Ray

Back in January of this year, I wrote an informal “Reasons for Rap Renaissance in 2010” feature that declared my optimism for the coming year. Something went wrong, however, and although I thought I had included B.o.B it seems that he just completely slipped my mind. Costly error. He has since become a hip pop star achieving stunning commercial success, and his album has been pushed FORWARD to capitalise on the singles (remember when they used to do that?). Even worse, I can’t claim to be the smart-ass that predicated his fame (damn!). But the album in question is a fascinating one that encapsulates the struggle between what Bobby Ray wants to achieve, what his record company think, and what he is actually good at. Part of the problem is that yes, the album is occasionally impressive, but the MC doesn’t make that much of an impression, he is still finding his distinctive voice.

There is an interesting duality to “The Adventures of Bobby Ray” that makes it a potentially divisive album. Rarely could there have been an a work such as this one, and the closest analogy I could make is the young rising UK star Chipmunk’s recent “I Am Chipmunk” LP. That showcased a scrappy 15 year old kid that got signed to a major, and over the next few years they managed to iron out both his flaws and any remnants of personality. The result was an album that was inoffensive but highly listenable, with Top 10 hits a plenty. This album from B.o.B is very similar, containing singles that are already ruling the Billboards – with heavy assistance from very popular and female-centric choruses.

Yet rarely does he come across as a truly talented or engaging rapper on the singles, so formatted is his style. On other occasions, he seems content just to randomly wail (B.o.B Marley he is not). And then you have a few songs that positively confirm that yes, the guy can really rap, with a nice convergence of voice, flow and lyrics (more of that later). The first half of the album is where, to be blunt, most of the money has gone. It is dripping with summer anthems for the radio and your headphones. “Don’t Let Me Fall” is an excellent opener but with a chorus that melodically sounds suspiciously like “Knock You Down.” It is also one of the lyrical highs on the album (from the host, at least). The gorgeous “Nothin’ On You” couldn’t be more clichÃ©d but it doesn’t matter in the least when Bruno Mars croons so smoothly, and many a girlsâ€™ heart will have melted more than a touch thanks to his falsetto. No wonder the song sits atop of the charts as we speak.

B.o.B tends to get conspicuously shown up by his guests, but then turns on the lyrical style on other tracks, as if he were being too polite a guest. Lupe Fiasco shows up with a nice verse on “Past My Shades” and Eminem offers a bizarre but thrilling cameo on “Airplanes Pt II” whilst Bobby Ray sometimes seems content to just stand and observe. Similarly, “Bet I” is a pretty dreadful beat, with coasting rapping until T.I. comes along and genuinely assassinates the track like it were an M.I.A. video. There is, at least, a relatively wide range of topics on offer, from girls (of course) to the plight of “The Kids” to introspection/reminiscing on “Airplanes.” Sometimes this can be undermined by the overtly cheesy music (songs like “Magic” spring to mind) but there is a certain light touch to the production that makes it, frankly, a wonderful listen in the summer. Perhaps the fact that he is still only 21 has much to do with, well, everything. How many problems could you really have at that age when you’re number ONE on the Billboards and your album has Eminem, T.I. and Lupe Fiasco on it? It’s infectious.

There are many quirks with this album, but realise that it doesn’t feel like a debut from a fully-formed artist, rather someone that intermittently flickers with potential and then dials it down to play it safe for the radio. There’s nothing inherently wrong with that, but as a result, if you’re looking for genuine depth on “The Adventures ofâ€¦” you’ll probably be searching a while. This is a bright and breezy listen, and should be considered marginally more consistent and enjoyable than Wale’s “Attention: Deficit” debut last year, which just didn’t quite work. That the album is concise helps the quality control tremendously, with only a dozen or so main songs before the “Airplanes” remix comes along with a smattering of bonus tracks. More than anything, however, there are very strong “pop” tendencies that provide the spine, and, it must be said, on those terms at least, the album accomplishes the mission. With hits like “Nothin’ On You” and “Airplanes” peppering the airwaves, B.o.B is already becoming a household name at a tender age – let’s just wait and see how much more there is to come from him. Just don’t get “The Adventures of Bobby Ray” confused with “The Great Adventures of Slick Rick” anytime soon, as the former isn’t anywhere near comparable as an MC throughout the album yet, but time is definitely on his side.