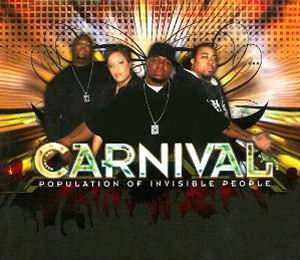 Full disclosure: I’m not the target audience for this album. I’m not a practising Christian, I’m not a fan of Christian rap, and I had to look up what the HHH in Carnival’s URL stood for. (It’s Holy Hip Hop, a contested label for Christian rap, contested because some Christians feel that hip hop is so ungodly that calling it holy is blasphemy.) But as sometimes happens, a Christan rap album comes my way to review, and so I put my personal feelings aside, and try to appreciate the album for what it’s trying to do.

This album came out a year ago, but only now found it’s way to my inbox. I’m guessing the Youngstown, OH group is trying to reach a wider audience than just the Christian hip hop community, so they’ve reached out to RapReviews. In their Myspace bio they write that they want to be banged in the club as well as played by church-going folk, and write “we feel that Carnival can open up shows for Jay Z, and still get there message across to all the people.”

I’m not so sure if they have an opening spot for Jay-Z locked down, and Hot 97 probably won’t have lead single “B.E.Z.” on heavy rotation. They don’t make a single reference to sex or partying, and their wholesome, family image wouldn’t fly on urban Top 40 radio. The fact that Carnival drop scripture passages into their rhymes makes their music sound a whole lot like preaching, and they are definitely first and foremost Christians. The group is comprised of Robinson family siblings Sa’Pream, Pheonix, Metal, and Phresh. Their dad was a preacher, and they’ve decided to use hip hop music rather than the pulpit to spread their religious message.

The good news for listeners is that the reason they went the hip hop route is because they have musical talent. They are all capable on the mic, and make hip hop that’s a little R&B, a little Dirty South, and 100% Christian. All of the lyrical content is focused on their faith, either rapping directly about God (“Superholy,” “Heaven,” “Megaphone,”) or rapping about how their faith informs their lives (“B.E.Z.”).

Beats are provided by veteran producer Kevin Deane, who did work with Mary J. Blige, Tina Turner, and Al B. Sure. OH producers Tone-Beatz also handled several tracks. The beats range from the hardcore hip hop of “Gorilla Grip” to the more pop friendly “B.E.Z.” and the funk workout “Superholy.”  “Stringz” and “Gon’ Postal” have the crisp snares and hi-hats of a Southern club track, while “Heaven” uses acoustic guitars and mellow keys to set the appropriate mood for a song about losing a parent. They even take a stab at crunk with “Steel Toes,” about stomping out evil: “We tried to tell the devil that we ain’t playin’ with him/but he still ain’t learned his lesson.” There’s too much emphasis on the slower ballads, which makes the album drag, and the crew are at their best when they pick up the tempo. Nothing on the disc really pushes the envelope or breaks any new ground musically, but it’s done well enough, and sounds as good if not better than the average street rap project.

As I said before, I’m not the audience for this, and I had a hard time sitting through this disc. Carnival don’t overcome the inherent preachiness of Christian rap, and their evangelizing approach means that they are best suited for devout Christians. Still, Carnival do a nice job of wrapping their message in decent music, and make a good argument that hip hop can be holy.