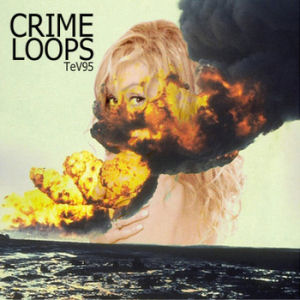 I’m willing to place a bet right now that if you the reader are in the same age bracket I am or older, the cover of TeV95’s “Crime Loops” will evoke memories of a classic James Bond intro. The femme fatale seems to be fading into the background behind an ever growing fiery explosion, of the kind rarely found in nature but often reproduced by the special effects wizards of M5 Industries. The openings of the Sean Connery and Roger Moore era films featured many now unforgettable songs, with varied singers working in the movie’s title and theme over epic musical backdrops, all while seductive female silhouettes gyrated on screen. To this day they still create the mood that you’re in for a special treat – a spy novel thriller brought to life with a British operative “Licensed to Kill” who is not the least bit afraid to use deadly force.

Our producer TeV95 seems to see himself more as the classic Bond villain than as the heroic protagonist. Perhaps he set off the explosion that billows across the skyline here just to get 007’s attention. His principal notion (and I’ll quote from him directly here) is that “Many of today’s artistic masterpieces are nearly impossible to release for sale because of outdated intellectual property laws. It’s arguable that some of today’s most popular artists may find the need to break the law to create their art.” As with any good villain he believes his cause to be moral and correct, with the ends justifying the means, no matter who or what gets hurt in the process. Life of course is not nearly so cut and dried as the plot to a Bond film, and whether or not anyone is REALLY hurt by sampling falls into an ambiguously grey area that has been argued in both the court of public opinion and the court of law for 30 years or more. Perhaps it would be better to dub TeV95 an “anti-hero” in the mold of a famous bionic redneck from recent sports entertainment history – far from the nicest guy around but beloved because he fought the law and more often than not HE won. We lived vicariously through his outlaw antics.

With that idea in mind, I give you TeV95, a modern day hip-hop Stone Cold Steve Austin. He’s happily, no GLEEFULLY fighting the war for sampling, refusing to accept that it’s a crime even as he refuses to name his sources for the beat jacking. He’s within his own moral code by giving away this short (22 minutes) 10 track album completely for free, and yet he’s right in saying it’s well enough produced that it could (and should) be sold. There’s not an unlistenable instrumental here. “Make it Last” is aptly titled as I could listen to the smooth crooners and reverberating instruments for hours. “9 Lives” goes forward and back over clicks, clacks and finger snaps, sucking you into a trance you only escape when the song ends. I know I recognize the samples of “Solar Flight” from some 70’s or 80’s funk/R&B album I own, but it’s too late at night as I pen this review to figure out which. The warbling audio notes and sci-fi sounds zip across the landscape come to an abrupt end far too fast. Perhaps it’s fitting the album’s last song is called “Don’t Know Why” because I don’t know why it has to come to an end – there should be a bonus track with Bun B rapping to this beat. Make no mistake about it, TeV95’s art may be a crime, but if that’s the case I encourage him to be hard like a criminal.