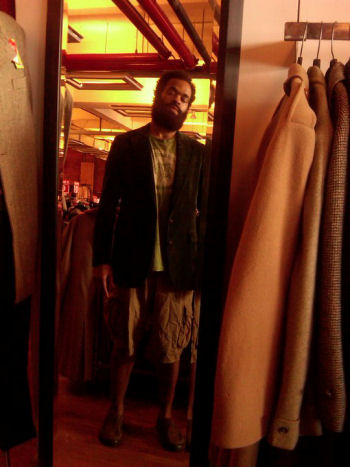 Emcee, poet, painter, musician, community leader; iAreConscious is all of these things. Whether he’s hosting the monthly Bondfire shows at the Bowery Poetry Club in NYC, inspiring other artists to join him in his regular pilgrimages to neighborhood soup kitchens to volunteer, or showcasing his art, both of the musical and fine art variety, iAreConscious is constantly reaching for the next level. Recently, iAreConscious made a trip to Japan to perform a number of shows. Upon his return RapReviews caught up with him to find out more about his work, including his Konnichiwa (K)ninja compilation, what special meaning going to Japan had for him, and why his next project is going to be named TRAP.

Adam Bernard: People know you by a lot of different names, including Conscious and The Bronx Über Villain. What made you decide to go with the extremely non-traditional iAreConscious as the name you’d go by?

iAreConscious: It made sense when I said it and I can hardly remember why. Everything with me is layered, there’s always more than one answer. What I do remember is for the purposes of releasing music, and having a unique name, I changed it to iAreConscious. Also I did it, I think, kinda mockingly and jokingly. Everybody becoming “I Am” was a big pet peeve of mine for a moment. “I Am” this, “I Am” that. I’m like, well everybody is I Am, there’s nothing unique about saying your name and putting I Am in front of it. Also, remember the cartoon I Am Weasel? I thought that was kind of humorous. I like language, I like to say things differently at times, and I realize the power of manipulating speech and writing and how people respond to it. A lot of these things led to me coming up with iAreConscious.

AB: I know you dislike being called a rap artist, or a rapper. Why is that? What do you have against the title?

IAC: Because I’m not a rapper {*laughs*}. I’d rather you just call me an artist. Before I could even rap a rhyme I was doing poetry, and I do a lot of different music stuff. I can play instruments. I can sing. So to be classified as a rapper would not be right.

AB: You recently released a compilation titled Konnichiwa (K)ninja. What was the inspiration for putting this out?

IAC: I was going to Japan and I needed product. Everything that I do is kind of connected, so one of the first things you’ll notice in the title is how it’s spelled, the word (K)ninja has a silent K. That’s in relation to two songs, these two (K)nigga songs with silent Ks on the forthcoming TRAP official album. I wanted to connect those things. I got some art from a cat (Josh Fisher). I think it’s important to have art that accompanies the music, (and take it) back to a time when album covers really meant something. But I needed product and I needed product fast, so basically I compiled songs that I had been doing for maybe the last five or seven years, music that has kind of moved to journey with me, and seeing that I was going to a different place, like almost another planet, I wanted to put together a product to have so I could actually sell something while I was in Japan when I did my shows, and also to also commemorate the event. This was the first time I was traveling outside of the US. It’s a pretty big deal, officially becoming an international artist, so Konnichiwa (K)ninja was my way of giving people some music, and some history behind some of the music. Once people purchased it I gave them updates with breakdowns of some of the songs. The one thing about the record that I’ve had little issues with, it’s kind of dark, so I’ve been thinking about that. My first interaction, or people’s first perception of me, might be kind of dark, but it is what it is. What can you do?

AB: How was Japan? What do you feel you accomplished there?

IAC: I think, for one, I’ve added something to my resume that makes me more attractive to venues and anyone looking to book me for stuff, especially more things overseas. Aside from just music, as a man, as an adult, to travel and to see new things helps to engross life. You can benefit a lot from a trip like that, you just gotta be open to do so. I wasn’t there very long, only a week, but you do certain things in life that kind of confirm life purpose if you happen to be that way. I’ve also learned people kind of live through you, and you give them motivation to do things, so the trip wasn’t just for me, it was for a lot of people that watch and follow me; other artists, other people that aren’t artists who enjoy seeing someone take a step to add to their life, their art, their work. It was a great experience and I’m definitely going to go back and I got my mind set on a few other countries to go to.

AB: I know in the midst of all this you’ve been gearing up to complete a full length album titled TRAP. In NYC’s underground hip-hop scene there are Detox levels of anticipation for it. Does that add any pressure for you?

IAC: {*laughs*} No, not at all. At the end of the day it’s about creating a great project, or product, or whatever you want to call it, and sometimes you have to push things back because they’re not ready. Also TRAP is not complete because there are certain things in life that haven’t happened to make it complete. The album basically is about the first thirty years. Some people say we live in thirty year cycles, so it’s a very personal record, it’s more personal music than I’ve ever done. I’m not talking about my family or nothin, but in ways I am saying things that are very personal, my experiences, and I’m sharing them with people. The process of putting something out like that is very important, you only get one chance to do something properly. Unlike a lot of my peers, I won’t be happy putting out an album and then forgetting about it a week later. This is real life stuff, so I’m taking my time to do it properly and getting the money behind the project to actually put it out in the right way, and building relationships so I can continue to travel so when this album’s released I can be in Germany doing a tour, and back in Japan. But there’s no pressure. There’s never any pressure for me to create music and I don’t think there should be.

AB: TRAP is a phrase that’s become popularized by T.I. and artists of his ilk. You’re not using it in the same way, are you?

IAC: I am in ways, and in ways I’m not. Its literal part of the record is an homage to southern music. I’ve come to appreciate a lot of minimalistic production. I was born on the West coast, but I’ve lived the majority of my life between Harlem and The Bronx. I’ve seen a lot of things that have to do with drug dealing and traps. I never sold any drugs, but I could probably write a manual and teach you how to do it right {*laughs*}. The record is about that to an extent because it’s something that I’ve dealt with. You have family members that may have been involved in either the use or sale of narcotics. I lived in Harlem in the 80s, I counted crack vials as a kid. “Crack is wack.” I remember all of that. Then the album itself, TRAP, what it’s really about is discovering that you’re in a trap, learning how to escape it, and closing the curtain on that trap while being in a brand new one. You’ve learned how to get out of this box that either family or society has put you into, or you’re trained in thinking based upon whatever school you went to, life school, and you realize things as you get older, you become more confident through experience and you get out of whatever trap you’ve been in, but you look back at the trap, now you have it in your hand and you manipulate it and you play with it, you understand it, you master it, while being in a brand new one. That’s what the TRAP is about.

AB: Finally, in addition to music you’re an accomplished poet and painter. What do you feel is more appropriate to express, or what would you rather express, through those avenues than music?

IAC: It’s relative to whatever it is that’s coming out. The last few years of my life things have blurred as far as my approach. I’ve been very abstract. I’ve been just allowing the universe to move me and I create based upon what is coming to me in the present moment and try to live presently. I think the only thing that separates is sometimes you can’t channel certain thoughts into a rap, that’s why I started singing. People in general take in information different ways and are able to learn from something written as opposed to something painted. It depends on where I’m at. Sometimes I have a definitive message in what I’m doing and a lot of times I may not, but depending on where I am, how I’m feeling, what’s going on, will determine if I pick up a pen to write a rap, or I’ll go and paint a picture. You definitely have different emotions that stream through you and they can’t all come in the form of a poem. I think also, writing poetry, I’ve gotten better at it after stepping away from it. I started doing poetry live and getting paid for it like ten years ago and one thing I can say is I definitely had to step away from it because I thought it was becoming the same and I didn’t want to keep doing the same thing over and over. The whole point is growth, and being better, and refining, so you step away from things and I started writing songs and writing more prose, I started having to edit other people’s work and rhyming more, so stepping back to poetry years later I am much better at it because I can better articulate feelings and ideas with the experience that I’ve had off and on stage and learning the other disciplines. Anyway, getting back to the question you asked me, sometimes it all bleeds together, sometimes it doesn’t. It’s relative to how I’m feeling or whatever the assignment is. It’s never any one way.