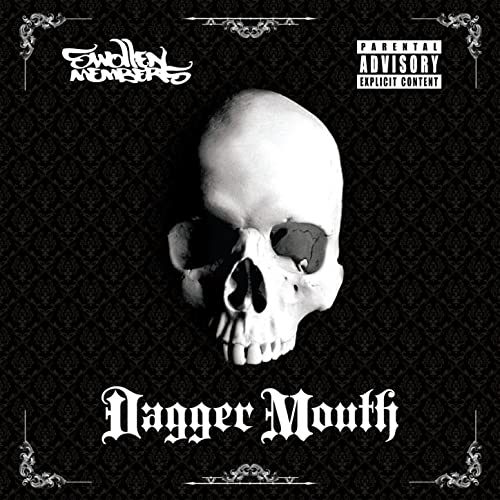 Dating back to 1999 with their commercial full-length debut “Balance,” Vancouver’s own Swollen Members have been among hip-hop’s most influential and most disturbed groups. Battle Axe Record could in fairness be called “The house that Mad Child, Prevail and Rob the Viking built.” The label either would not exist without them, or its relevance would be greatly diminished. Swollen Members won two Juno awards while under its auspices – the Canadian equivalent of a Grammy – but there’s some evident frustration with not reaching larger sales or mainstream recognition worldwide. The jump to Suburban Noize Records for the 2011 release of “Dagger Mouth” is all the proof you need that they’re looking for a bigger commercial outlet. This new partnership should put their album in stores everywhere.

As for the disturbed part of the equation, album titles like “Bad Dreams” are just the icing on the cake. Mad Child’s issues with substance abuse are well documented and would take too long to recount here anyway, but he’s vowed to have a newfound sobriety going into the new decade and a renewed commitment to making music. Whatever torment he feels from withdrawal he translates into rhyme on songs like “Mr. Impossible,” which in title alone could be an apt metaphor for him having survived all of these years without an overdose.

“Thank God for replenishment, now I’m power limitless
I devour enemies, rappin like there’s ten of me
Crawl like a tarantula, creep like a centipede
Madchild from S&M, they’ll remember me
I’m a renegade, stoned drinkin lemonade
I’m a heavyweight, poems like I’m Hemingway
Human pipebomb, everything wrong
Little Hulk smash {*RRAH!*} little King Kong
I don’t care though, I’m a weirdo
Glasses at night, let my nails and my beard grow
I’m a werewolf starin like a scarecrow”

Of course he’s only one half of the Swollen Members equation. Prevail is the countering force of their yin/yang equation, rising when Mad Child falls, and fading into the backdrop when Mad Child rises. Duos that compliment each other this well are a rarity in hip-hop, as the very nature of being an emcee is so egotistical it often puts strong personalities into conflict. There’s no conflict on “Fresh Air” though – Prevail comes in and gets his shine on between Mad Child’s verses and in the process they both sound fresh over Rob the Viking’s future fresh beat – similar in both quality and execution to an Alchemist bomb.

“+Dagger+ in the +Mouth+ like a pirate ship
and a highly classified nanobyte microchip
Scanners fiber light from my eyes guide ships to the passage
My mind shifts gears to the literary classics
Follow orders, protect the Battle Axe borders, defend the headquarters
Beware of sharks who can only swim in shallow waters
A beacon of lumins’, speak the language of humans
A spice trade of words mixed like fresh herbs and cumen
You don’t want to see my +Boys+ get +Beastie+ Rick Rubin
The spite be comin to me real natural like Truman
Capote, peyote, coyotes and jackals
My team is real +Predatory+ but we ain’t from +Nashville+”

Prevail gets less of the attention and press at times, but the quality of his flow and attention to clever wordplay and punchlines don’t merit him being ignored. Mad Child lays his soul bare on every track though, and the nasally delivery makes him doubly impactful in a way that hip-hop heads either love to death or just can’t stand. I fall into the former category, which is why I even enjoy hearing him scratched into the chorus of “Moonshine.” If there’s a common thread that weaves them into the Swollen Members tapestry though, it’s the unrelentingly heavy tone that Rob the Viking gives them to rap over. “House of Sin” sounds like a horror movie soundtrack meeting a hip-hop beat, filled with heavy piano keys and married to a sinister bassline. Prevail brags he’s “on some Apocalypse Now” and Mad Child brags he’s “on some Bruce Lee ‘Enter the Dragon’ shit,” and the cultural references are cinematically apropo.

Throughout “Dagger Mouth” the group keeps things unapologetically heavy and hard, which is exactly what their long-time fans and supporters would want. When Mad Child and Prevail take it to 10, Rob the Viking takes it up to 11. Dogs bark, native warriors howl and sinister sounds spark on “War Money” as Mad brags that he’s “swam through rivers of blood and seen hell fire/won’t lie, when I did percs, I never felt higher.” If those sentiments seem grim then you can’t even begin to imagine the murky depths of “Electric Chair,” where Prevail proclaims a scarily carnivorous appetite and seems to indicate he’s the voice of the Devil if you play a Swollen Members record backward. The track won’t let you out of the grip of the madness – the chorus is just four notes going BANG BANG BANG BANG and throwing you right into Mad Child’s salivating maw.

It may be that the violence and despair of “Dagger Mouth” are too much for some listeners, but like a classic Wes Craven film the moments of depravity and insanity are measured with a good dose of humor and wit to make them that much more palatable. You can’t simply lump a Swollen Members album into the overabused and misused horrorcore cliche though, because there’s lyricism and production values here going well beyond mindless violence for violence’s sake alone. Prevail and Mad Child are not butchers with no redeeming values; they are the last survivors of a world filled with demons seeking to swallow them whole metaphorically and otherwise. Rob the Viking’s beats are dark, but they actually illuminate the stories told beautifully. This is hip-hop with an edge, on the razor’s edge, delivered straight from the sharp “Dagger Mouth” of Vancouver to fans the world over.