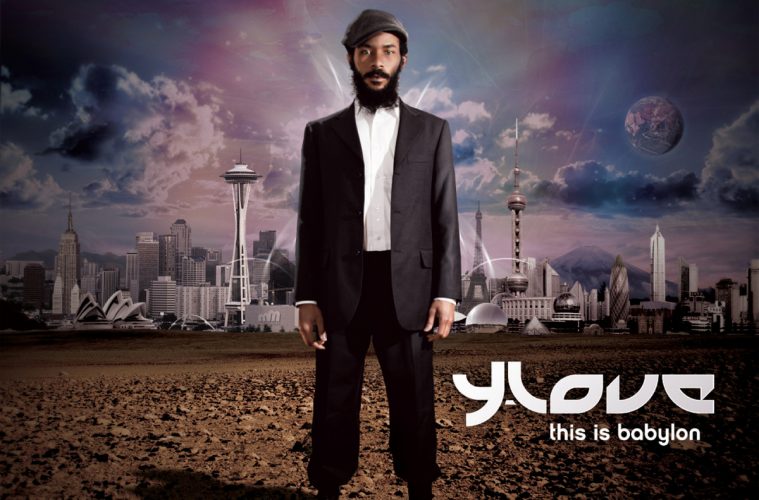 Y-Love :: This is Babylon

Y-Love is a unique character in the hip-hop landscape. Initially, given his name, I assumed there’d be Rastafarian influences in his work, but it turns out Y-Love’s religious influences are even more unexpected. Y-Love is Black, Puerto Rican, and Jewish, a combination you don’t see too often. Given the strictness required by Orthodox Judaism, Y-Love doesn’t have a choice but to wear his religion on his sleeve. Outside of infusing his religion into his music, Y-Love also has to adhere to tradition which inevitably hinders his musical career. Imagine being a rapper but not being able to take any shows on a Saturday. Of course, Y-Love’s religion is only a small part of what makes him interesting. Over a backdrop of new age electronic hip-hop, Y-Love takes us on a trip and explains why he thinks â€œThis is Babylon.â€

As hard as it is to overshadow Y-Love’s futuristic mixture of English, Arabic, Hebrew, Aramaic, and Latin, producer Jake Break almost steals the show. It’s hard to describe Jake Break’s style, but it fits Y-Love perfectly. At their roots, the beats are pure hip-hop as heavy snares and drums dominate the tracks, but Break layers everything and anything over the drums. â€œ6000â€ features interplaying electronic synths full of distortion and static, sounding more akin to industrial or garage music. â€œMind Transitâ€ is closer to your traditional rap track with funky drums and a looped bass line driving the track, but heavy synths, squeaks, and monkey sounds somehow find their way into the mix. â€œMt. Sinai,â€ with its simple piano loop, sounds downright primitive next to the new school electronic collages put together by Jake Break. It’s not often you run into hip-hop production that is truly new and different and even rarer is the occasion where this music is also good. Jake Break trumps this trend as he manages to push the envelope while keeping your head nodding.

Y-Love does his best to keep up with Jake Break’s innovative beats with his own unique rhyme style. Truthfully, outside of the gimmick of being able to mix several different languages, Y-Love isn’t much more than your average underground rapper. This isn’t a big knock on the man as his energy and lyrics make up for any rhyming deficiencies. Y-Love’s message is a socially conscious one and it is delivered through complex rhymes. I’d give you a sample, but a verse doesn’t go by where Y-Love doesn’t drop a phrase in another language and which I don’t have the slightest clue how to spell. â€œThis Is Babylonâ€ is an appropriate introduction to Y-Love’s revolutionary style and message and serves as a five minute introduction to his movement. â€œBring It On Downâ€ can best be described as the orthodox Jew’s version of a club banger as Y-Love shows us that you can be pious and still get down. â€œNew Diseaseâ€ is a militant political conspiracy that would make Public Enemy proud. â€œFrom Brooklyn to Ramleâ€ is as traditional as Y-Love gets as he pays ode to his roots.

The only real complaint that can be lodged against Y-Love is that sometimes he lets his religion take the forefront too often. For someone as devout as he is, that may be his purpose, but for the average fan the constant switching of languages and Jewish references may send Y-Love the way of Christian rappers. The implication that Y-Love considers our world a modern day Babylon may be either complimentary or offensive depending on how you look at it, but sparking thought and discussion seems to be Y-Love’s objective. Overall, dismissing Y-Love’s music as too religious would be downright foolish as the man has a lot to offer to any rap fan of any religious denomination. Looking past the heavy religious overtones, you’ll find a man with a positive message and more than enough passion and energy to back up his lofty aspirations.