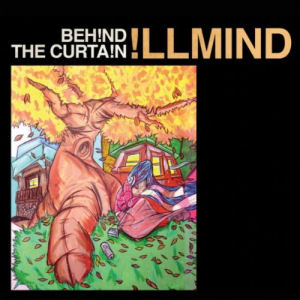 Illmind, usually (but not always) stylized as !llmind, has been one of the fastest rising hip-hop producers of the last two years. His resume goes all the way back to 2003, providing tracks for everyone from Akrobatik to Little Brother to KRS-One, but his collaboration with Skyzoo on “Live From the Tape Deck” was one of the best albums of 2010. The album put both men on the map to a far greater degree than either had been previously, a carefully conceived shot of adrenaline in the arm of hip-hop to remind us all what could truly be achieved by a great rapper and producer both on their A game. Now more than ever hip-hop artists are calling him up like De La Soul, but if you’re not a top notch emcee, he’s got an answering machine that can talk to you.

Hip-Hop’s instrumental only albums have always been in this niche where for better or worse major labels are not going to consider them marketable, minor labels are not going to consider them profitable, and 9 times out of 10 they come out as white label promos or bootleg DJ service MP3 packs. Official joints like Dan the Automator’s “Instrumentalyst” or Evidence’s “Yellow Tape Instrumentals” do occasionally break through, but even then they can in part or whole simply be the beats they made for other people’s hits. Then you have the reverse effect with something like J Dilla’s “Donuts,” where what could and probably should have existed as short snippets of his genius ended up being looped by everyone (with or without permission) for their own rap songs.

Getting back to Illmind’s phone, “Behind the Curtain” could serve as the soundtrack for that machine or his voicemail, although you’d incur a lot of long distance charges to listen to all 55 minutes. This album is a bold move by both the artist and label, but not necessarily for the obvious reasons. Yes – it’s taking a chance that an instrumental album will sell when they don’t necessarily do well. Yes – it’s a set of beats that Illmind probably could have sold to everyone from 50 Cent to Talib Kweli and made even more in up-front production fees and/or back-end royalties. Yes – it’s something that a small boutique like Nature Sounds might regret if it doesn’t move units. Indie gold may be more profitable than major label gold, but major labels can take tax writeoffs on flops, knowing they have a big margin of error and the money to absorb it. Small labels need successes almost every time. To up the odds it will smash, Nature Sounds offered digital download cards with the first thousand copies allowing people access to the bits BEHIND the beats, letting budding producers remix Illmind’s work.

Honestly if you can do better than Illmind did using the same sources he has, I’d like to hear it. “Our Victory” goes for jugular right away with a hard hitting snare with a worn out head, some futuristic sci-fi sound effects, and lush keyboards that are all built up until you crash headlong into a wall of sound. As much as I enjoy it standalone, I have to admit the song has so much swagger I found myself picturing GZA spitting one of his trademark intellectual raps over it. “Ahead of Da Game” is more of a West coast track, echoing over a big thumping bassline, hitting eerie notes that you could just as easily picture Ice Cube making demands like a Don Mega over. “Blue Paint” has that rugged high end distortion that is probably too raw to rap over, but you could see the likes of a Skyzoo or Celph Titled trying. Some instrumentals are long drawn out thoughts, like the three minute long “Mug Shots” and the piano heavy 3:23 of “Wannabee,” while others are more Donuts-esque sips of flavor like the fast and electronic “Rapid Fire,” clocking in at just under 120 seconds on the clock.

At no point anywhere in the 21 tracks of “Behind the Curtain” will you hear a rapper kick a few bars to get a few cars or rhyme a few flows to get a few hoes, and that allows the album to live up to its name. Even if you didn’t get a copy with the digital stems that allow you to dissect his production, the instrumentals sans emcees approach really does pull back the curtain and let you audibly see what would lyrically be distorted. Not to gush too much, but it becomes clear pretty quick why Illmind is among the elite levels right now. “Oh Wow” might be a tongue-in-cheek joke for Illmind, but that’s the reaction one genuinely has hearing it. It’s head-nodding, heavy, and yet completely different from what every other producer making hits is doing today. So many people want to imitate DJ Premier, Timbaland, Polow Da Don and Drumma Boy just to score a hit, but Illmind’s going to be the one they all copy in a few years. He went to the next level and wasn’t afraid to let us see him do it.

Illmind :: Behind the Curtain
8.5Overall Score