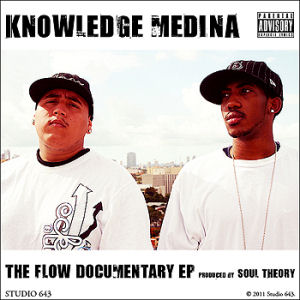 Knowledge Medina hails from what he likes to call the “Gunshine State” of Florida, and he rolls with the Studio 643 crew, who have slowly been bubbling up underground thanks to tracks produced by Soul Theory. And who has Soul Theory worked with, you ask? Good question – Reks, Edo.G, Skyzoo, Reef the Lost Cauze, Termanology, Nature, and at least a half dozen more of your favorite underground artists. As it turns out having those connects turns out to be beneficial for Medina because Reks makes a cameo appearance on his “Flow Documentary EP” for a track that’s well named – “Forever.” I think I’ll be bumpin’ this one for a while:

Reks: “Eternal lastin, we forever
So much passion, all the et ceteras
Y’all hear the records, know that Reks is
still here with Soul and Knowledge applyin the pressures
Dyin to exit
We only concerned with entrances
Sentences we better perfect it
I ain’t into lectures
But I gotta school them, minimal efforts”

While it’s not the kind of high energy performance he exerts on “25th Hour,” it’s nice to chill with Reks and his friends as they lay back over Soul Theory’s mellow cut. That’s a general theme for Knowledge Medina on this EP – being laid back. He often talks a hard game, but he seems to espouse that old philosophy of speaking softly and carrying a big stick. Even when he has Soul Theory turn up the menacing instrumental backdrop a notch for “Essence of Death,” the pace is steady and sure and the smoky flow is almost laconic. He’s like a Floridian version of Prodigy:

“Hey yo, tell ’em I’m here
I’m a step ahead of the rest, with the essence of death in the air
You still second to best
Tryin to follow the steps of a vet, but I can pick up the smell of your fear
So pay your dues, I bring heat, like Satan do
Tryin to get paid in full, we ain’t settlin here
So pray for a blessing, I know what the game’ll do
Give you a lame excuse to change your perception”

In general I’m feeling what Knowledge Medina and Soul Theory are about. In specific though there are times I feel that times where a little more variance in the pace of his flow or the beats of his tempo wouldn’t hurt. Even the legendary Mr. Slow Flow himself PMD would pick it up and spit quick if the beat or situation called for it. I can understand being laid back for a state anthem like “F.L.A.” but when you’re doing a song with a somewhat cliched title and topic matter like “The 9mm” the least you can do is fire it up with a little bit of vocal intensity. Medina’s on the right track and I can definitely Knowledge that, but I feel like it’s only the first step and I’m still waiting to see how high he will climb.