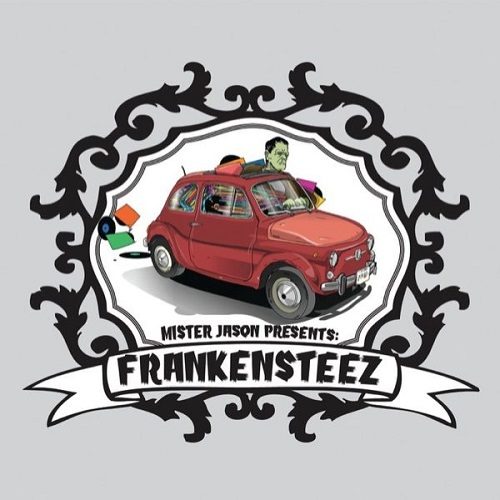 Mary Shelley’s story of Dr. Frankenstein and his ogreish creation is one of the most famous novels of all time and the monster itself remains an enigma. Created in a laboratory out of whatever Victor Frankenstein could get his hands on, the creature roamed the wilderness looking for somebody who could accept and understand him. This was always going to be tricky as he was yellow skinned, eight feet tall and hideously ugly which is not a good look for anybody, particularly when you are trying to make friends. “Frankensteez” doesn’t seem to have the same problem though as it can call on friends from all over the hip-hop landscape due to the connections of its creator.

Mister Jason is by no means on his own though and the creation of “Frankensteez” is not unlike the creation of the similarly named, towering monster as an assortment of samples, instruments and guest MCs all make up this beast of an album. Long time collaborator and Wasted Talent member, K-No Supreme is a huge part of this album as he rhymes on sixteen of the album’s twenty one tracks and perfectly accompanies Mister Jason’s varied beats. This album also benefits from guest spots from the likes of Edo.G, Slaine, DJ Revolution, Q-Unique and a host of other names that will be more than familiar to most listeners.

After a brief intro the album kicks off with “Monster on the Rise”. Over a kazoo driven riot of a track, underpinned by some crazy percussion, K-No wastes no time in getting down to business to let us know that Frank is alive and ready to rear his head:

“Immortalized in stone, the wickedest tone
Heard from up in the mountains down to your picketed homes
The sound of rickety bones crack when I’m on the clone’s back
The microphone jack is rigged, wigs are blown back
Heads are flown at impossible rates
The longer I wait, the stronger I get, the monster awakes
Shakes off the dust and flakes off the rust
And busts through the planet’s core
Damage your man-of-war
I vanish in the forest, rhymes prehistoric like a Tyrannosaurus
Eating all the tourists, evil metamorphosis…”

K-No Supreme has a vocal delivery that fits tracks like this and the following “Lose Your Mind” perfectly. Smooth and understated, you could easily just soak up his voice as another part of Mister Jason’s multi-layered instrumental but when you pay attention you will see that he is no slouch on the microphone.

“Humble Haters” has a different feel to it and features Boston legend Edo.G who, along with K-No, squashes the competition like pesky bugs. The beat is one of the standouts on the album with the almost jolly beat occasionally smacked in the face by some abrasive brass. The topic changes for “Black Angel” as K-No waxes lyrical about a member of the fairer sex that he has quite literally been watching; “I’ve got binoculars to watch you like a stalker does…”. Again the combination of K-No Supreme’s flow and Jason’s slinky yet sharp beat is exceptional as Saucy Lady comes through to lend her seductive tone to K-No’s tale of infatuation.

“…In a rage I be with every page I breathe
We blaze MCs like the dankest trees
Amazing feats from the Frankensteez
Plus they say I’m mad nice like I ate some E’s
Jay to beats, I’m like a slave to these
When I go off the top, yo, I’m great with frees
I keep it mad greasy like steak and cheese
Any time you team me with the K-Supreme
Anywhere I am is the place to be
Even if it’s on an island in a cave with bees
I’ll find your hoe and then I’ll spank the skeez
While she’s slobbing on my nob with some aching knees”

Paul Foley and General Stoor both show up for short solo tracks with “Cheap Date” and “Words from the General” respectively. Both further adding to the vibe of the recording as Foley speaks on getting drunk on a budget while Stoor claims that he “once had a three-way with two dolphins”. The thing is that he says it with so much conviction over a slamming beat that he may just be telling the truth.

Things get a little darker near the end of the album, none more so than “Skeleton Key”. Mister Jason serves up an ominous backdrop of shuffling drums and creepy bass for K-No to enter the mind of an obsessed stalker turned killer. The way that K-No’s lyrics are layered also adds to the schizophrenic feel. The video for this song is also worth checking as it’s pretty damn good. Creepy yet artistic.

The album ends with “Mister Jason has a Posse” which features twenty six, yep, twenty six rappers all on one track each repping a letter of the alphabet. Esoteric, Termanology, Reks, and Jaysaun all form part of the stellar cast but it’s Akrobatik who sets things off:

Tygastyle does his thing for the H’s though:

“Howie has a habit of hitting the hash, homie
Hell has a heaven, happy, he is half holy
Helps himself, hates hand-outs, he’s honoured
High as hell, healthy, humble, hungry, honest”

The chaotic posse track is a fitting end to an album full of musical surprises which spans several different styles and eras of hip-hop. Despite the wide variety of music on display, Mister Jason’s beats are consistent enough to maintain the level of quality throughout while K-No Supreme does a great job tying it all together with that smooth, relaxed flow. While this album will gain attention for the quality and quantity of guests, the real stars of the show are Jason and K-No who have created a monster of an album. “Frankensteez” is alive and, unlike his distant relative, shouldn’t have trouble making friends.