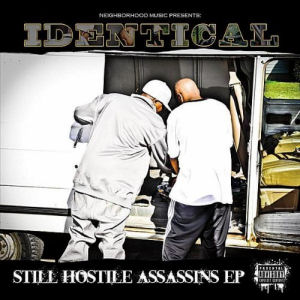 It’s not just a name for Identical – it’s who they are. Real life twins Santoine (SJ) and Antoine (AJ) Jackson are out to represent their hip-hop heritage dating back to 2001 and their hard knock life from the streets of Inkster, Michigan – a majority African-American neighborhood of Metro Detroit. They’d certainly have no shortage of material for the latter, because in the ten years since I left Eastern Michigan, things have not necessarily changed for the better, and the auto crisis and subsequent bailout of the late 2000’s almost completely derailed the automotive heavy economy of the area. Things have improved in the last year, but one does not necessarily think of prosperity first when thinking of Detroit. Still with an average median income of $35,950 according to Wikipedia, Inkster is probably better off than some of the more blighted neighborhoods.

One thing’s true about Identical on the “Still Hostile Assassins EP” that was true on their last album and the one before that – these (literal) brothers are unrepentantly hard. Even if their neighborhood was or is doing good, things just aren’t good enough for these twins, and opening this album with a song called “Gun On My Lap” might just say it all. The Lenn Swan produced “Don’t Impress Me” is even more explicit. If you’re flossing around Identical, you might just wind up gaffled:

“Niggaz talkin on track about the shit that they hold
gon’ get stuck for it all, in my hood it’s gettin sold
In the streets you got work, just keep it on the low
Cause your big mouth got the feds investigatin bro!
Plus your block on fire cause you niggaz on brag
Come around here with that shit and get lit with the mag”

With sentiments like “don’t be cryin like a baby when you stretched in the pen” and “nigga you bleed like I bleed, nigga come and test me” these rappers might be ready to go to some infamous hood like Compton or 5th Ward and start some shit just for the fuck of it. There’s no doubt they’ve got big huevos and swing ’em around as freely as they want – but does it make for enjoyable music? In a sense, yes, but that’s because they live up to their name in ways they didn’t intend. “Black Mask” featuring Shundai sounds identical to a stomping Three 6 Mafia track. “Courtrooms & Funerals” could be interchangeable with The Game, although if it was his track it would be a little more polished. Hollow might be the producer of “Kick Em Out Cha Hood” featuring Blac-E-Blac and Oda, but I’d swear it’s Zaytoven or Drumma Boy.

I give all respect due to Identical for two reasons – it’s hard to last ten years in the rap game, and it’s even harder to last that long as an independent artist in the cutthroat Michigan rap scene. There’s no doubt they’ve earned the right to talk as much G shit as they want on “Still Hostile Assassins,” and they certainly do. In evaluating their artistic growth since their last album though, the only thing I can say is that it might be a little more thuggish than the last one, and the beats might be a little less original. It doesn’t make this a terrible EP, but it does make it one that fell short of my expectations.