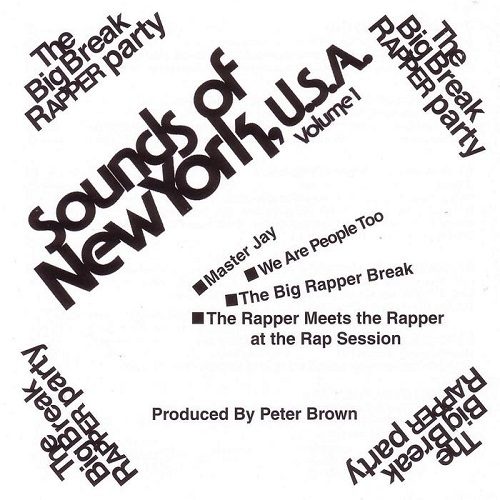 Things were happening fast in 1979. Once Sugar Hill Records came out with their Sugarhill Gang, everybody scrambled to put out a record. Among the first was Gabriel Jackson b/k/a Spoonie Gee, who recorded a solo platter while he was still considered a member of the Treacherous Three. His “Spoonin Rap” came out on Sound of New York, U.S.A., sharing its rhythm track with a spacey instrumental that appeared on the same label, Cloud One’s “Patty Duke.” Sound of New York, U.S.A. (not to be confused with Sound of New York, responsible for Indeep’s club classic “Last Night a DJ Saved My Life”) was one of various small labels operated by veteran record producer Peter Brown, the most prominent being P&P Records, a joint effort with fellow Harlem producer Patrick Adams.

Spoonie remained his most famous rap signing (it was also very short-lived), but with dozens of – largely unknown – hip-hop tunes on his many imprints (up to 30), there’s a lot to be uncovered. In 2006 Traffic Entertainment compiled a collection of Peter Brown productions patterned after an early sampler a sister label called Hit Makers of America released around early 1980 that gathered eight previously released 12-inches. Research suggests that at least three variations of the compilation were available on other Peter Brown imprints. The disc at my disposition has eleven songs, only three of which appeared on the original release. And for whatever reason there’s no sight of “Spoonin Rap.”

The ‘reissue’ nevertheless offers some interesting insight into rap’s earlier days off the familiar pieces that can be heard on hundreds of compilations worldwide. Okay so maybe competition wasn’t that tight, still four of these tracks (“CC Crew Rap,” “Scoopy Rap,” “Willie Rap,” “Family Rap”) were once ranked by the ego trip luminaries among the ‘Greatest Hip-Hop Singles’ of 1980. (Going by their labels the latter three all bear the 1979 signature.) Without any liner notes provided by the compilers, it takes some speculation to make sense of it all.

As is typical for rap’s earliest studio recordings, the backing tracks are laid down by musicians and they are likely to get used by different artists. In this particular case it’s even feasible that “Spoonin Rap” and “Patty Duke” had a common point of departure, the former putting raps atop the funkily loose percussion, the latter enriching it with Moog effects. Whether you call it the “Spoonin Rap” or the “Patty Duke” beat, it gets used two more times on the compilation. “Family Rap” by the Family features Mike C, later known as the Fearless Four’s Mighty Mike C. Here he tag-teams with a certain Toney Tone (not to be mistaken for Cold Crush Brother DJ Tony Crush, sometimes also called Tony Tone). The two engage in an inspired back-and-forth, hinting at a degree of experience other rappers on this compilation clearly lack. Although he doesn’t make himself heard, they namecheck Grandmaster Kev-Ski on the (imagined) wheels of steel.

The other type of DJ crucial to old school rap, the one that actually rapped but who came from a club and/or radio background, is represented by the late Willie Wood (a/k/a Woody Wood), whose “Willie Rap” (or “Woody Rap”) is one of the earliest rap recordings out of Queens. He is typically eloquent in his braggadocio, going to lengths to establish himself as a Casanova – or to quote from “Spoonin Rap,” “a man’s threat” and “a woman’s pet.”

Also representing Queens was Far Rockaway’s Master Jay (no relation to Jam Master Jay), who drops socially relevant rhymes over a funked up “Another One Bites the Dust” arrangement on “We Are People Too.” In line with many socially conscious rappers who came after him, he hates to waste his and our time: “Everybody listen and listen good / I’m only gonna tell ya like a MC should / I’m not here to get your money / nor to say sweet words to your honey.” Supplemented by an almost avantgarde jazzy break/chorus that recalls the civil rights era and the beat generation with its “Say it loud! We are people too!” chant, the track is a prime example of hip-hop updating existing musical formats.

Reverence aside we should be careful not to view rap from those times as specifically authentic. Still some noteworthy features are to be found on these 12″s. Sweet G reminds us that hip-hop was also a product of the disco scene when he rhymes, “I put the disco dips in your hips / I put the disco rhymes in your mind.” “CC Crew Rap” not only features a rare saxophone but also mechanically sped up vocals. While the output of the established labels was largely free of profanity, the artists here, recording their vocals for the first time professionally, simply rapped like they were used to or how they heard it from others. ‘Sucka nigga,’ once borrowed by A Tribe Called Quest as an old school reference, is heard a couple of times. A young miss named Shorty T boasts, “It ain’t no motherfucker that can rap like me.” Scoopy uses practically those same words – plus “sucka nigga” – in his “Scoopy Rap.”

Speaking of females, the b-girls make themselves heard on “Sounds Of New York, U.S.A. Volume 1.” Honey B and Sandy D are billed as the Universal Two but actually call their act the Universal Three. Inattentive label staff also must have misheard the title of their song “Dancing Heart” (1981) because you’d swear they’re “dancing hard”… As for the content, they may dwell on their feminine charms (“I’m 5’3″, with a 29″ waist / heavy hips and a pretty face”) and fashion items (“Lizards on my feet and gold on my teeth / I got everything a fly girl can need”), but they also warn the listener about the “street game.”

The female quota would be even higher if “Super-Jay Love Theme” were included in its vocal version, where it’s called “Santa’s Rap Party” and Super-Jay is joined by female rappers. Speaking of Santa, old school rappers had a thing for St. Nick, and so Scoopy (actually probably Scoopie D) attempts to kindle the Christmas spirit at the beginning and end of “Scoopy Rap.” In between he gives an early example of rappers lacking gallantry:

“I seen a freak in the middle of the slog
legs like a elephant, feet like a frog
She winked at me out the corner of her eye
This little wink almost made me cry
She said: Baby baby, don’t be so blue
cause all I wanna do is talk to you
I said: Baby baby, just stay away
and let me rock on this very day
[…]
Like eenie and meenie, and minie and moe
you catch a female by the toe
If the girl is like on the wack
Scoopie D will give you your money back”

Such lyrics of interest aside, the tracks largely consist of rhymes that sound very familiar in the context of ’70s rap. These aren’t the originators, including those who don’t sound like complete novices like Teen-Machine (“Teen-Machine Rap”), who have a name-biting Busy Bee in their ranks and sound every bit like the kids that they are. Conversely, there’s Sweet G, who fulfills the role of master of ceremony in the sense of party host quite nicely with his “Boogie Feelin’ Rap”:

“I’m known around the world
and the only thing that I’m guilty of
is makin’ love to pretty young girls
I’m the Clark Cable on the turntable
Say the Al Capone of the microphone
I’m the Fred Astaire of the dancefloor
I say the Eliot Ness of the discotheque
And I’m the Richard Pryor on the amplifier
Yes I’m the Reverend Ike of this here mike
I said the Ali of the disco scene
And I’m the Sugar Ray of the rock today
Let’s do it, do it, do it…
See when I came out of my mama’s womb
I had a mike in my hand, I began to swoon
The doctor took me to a special room
You know he called the News and he called the Post
You should hear that doctor really boast
Said: I got a boy, just been born
I really wanna tell you this boy is on
I said a newsman came in a rush
and I was just about to get on the bus
He said to me: What will your chances be?
Said: My name’ll go down in history
Said: The name of G will surely be
the one to rock you to your knees
So in the end when the fun is done
You know Sweet G is second to none
Said: Hey baby doll, how about a date?
Don’t worry ’bout a thing, said I won’t be late
And I’ll pick you up in my 98
If my 98 is the wack
then I’ll pick you up in my Cadillac
Said my Cadillac don’t make the scene
I’ll pick you up in my limousine
My limousine is not your choice
I’ll pick you up in my new Rolls Royce
My Rolls Royce is not your car
I’ll pick you up in my Jaguar
Say my Jaguar can’t make it up the hill
I’ll pick you up in my new Seville
My new Seville can’t make the set
then I’ll pick you up in my Corvette
Say my Corvette can’t take the load
I’ll pick you up on my skateboard”

Sweet G had his signature tune, “Games People Play,” still ahead of him, but with the exception of Mike C (who in the interim recorded “Rap Attack” with an expanded Family Four) no one here rose to hip-hop fame. Master-Jay (“Sax in Harlem”?) and Teen-Machine (“It’s Rough in Harlem”?) possibly laid down further tracks with Peter Brown, but even though he put out rap records throughout the first half of the ’80s, there seemed to be no ambition to build something greater. Nonetheless the 2006 edition of “Sounds Of New York, U.S.A. Volume 1” is a stunningly diverse collection of old school hip-hop and disco funk with a focus on Harlem. For my money, it could have also been a double disc with full-length versions of “Scoopy Rap” and “Death Rap” plus “Spoonin Rap” in all its 14-minute glory.