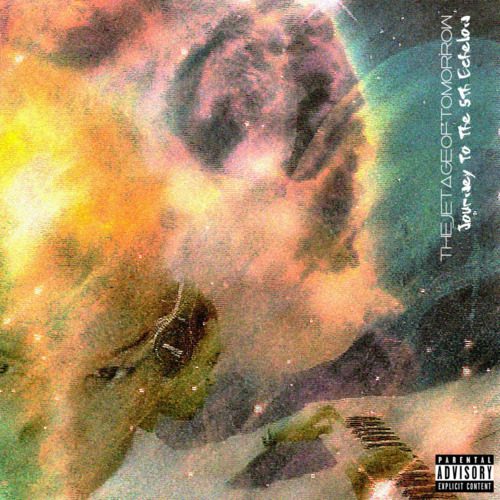 The Jet Age of Tomorrow :: Journey to the 5th Echelon

“See the 5th Echelon, it’s not just, your average place
It’s a place, where you’re allowed to explore your mind – freely
Explore those inner emotions, that you try so hard to hold in
It makes you realize… that all you need in this world is yourself
And if you have yourself… then nobody can stop you”

Intentionally or not the Odd Future collective plan doesn’t seem to be to “Kill Them All” but to outproduce them all. In the five years since they began their ascent to hip-hop stardom, they’ve spun off as many or more solo albums and side projects than the Wu-Tang Clan did in the same timespan. One of those many projects goes by the mysterious name of The Jet Age of Tomorrow – a collaboration between Odd Future’s own Matt Martians and Atlanta producer Hal Williams. The story goes that Martians was producing more beats than OF’s founder/leader Tyler, the Creator could use and that even though he liked them they didn’t always fit his sound/style. It was only natural at that point for Martians to spin off a solo project.

That doesn’t explain the group’s name though, because taken literally, it seems a bit absurd. After all we’re already living in the jet age and have been for almost 75 years, dating back to the development of jet engines for aircraft use before World War II. If there was a “tomorrow” to the jet age that came decades ago when commercial air travel became affordable and accessible to the middle class, although with rising fuel prices and airline fees that trend seems to be inexorably reversing itself. By this point in recorded history that age seems almost antique, as we even had a short lived TV drama called “Pan Am” waxing nostalgic for airplane life in the 1960’s. What’s the real age of tomorrow? Is it science-fiction style molecular transporters? Is it magnetic levitation for super fast bullet trains? Or is it both and something else we can’t even conceive of? We won’t be able to say until we’re living IN that tomorrow. If one can assume their name choice is intentional and not random then, it has to be to imply that like when the term “jet age” was coined in the 1940’s, the future of that age was completely unknown, and therefore as impossible to predict as the future of mass transportation is today.

In comparison to their sound on “The Journey to the 5th Echelon,” this explanation holds weight, given the emphasis on a technological and at times almost accidental sonic landscape. The inspiration for their sound would be groups like N*E*R*D and producers like Pharrell, preferring to cut the edge of what music should be instead of riding somewhere comfortably behind the blade. As such Jet Age (the shorthand I’ll use for them from here on) are starkly in contrast to the rest of Odd Future in that rapping is not the focus of their music – and in fact it’s quite often an afterthought. There are a handful of tracks which feature no vocals whatsoever, like the aptly named drum and bass oriented “Thump Thump” or the spaced out ethereal vibe of “SunBurst,” a track perfect for the Hearts of Space. Even some that DO have vocals make only minimal use of them – you won’t hear anybody speak for over two minutes of “Wonderland.”

There are also newcomers to the Odd Future sounds on vocals, such as the semi-serious rapstress Kilo Kish from hip-hop trio Kool Kats Klub (a name which would be unfortunate to abbreviate, though that was undoubtedly the point). Her playful vocals on “Want You Still” walk the line between a tripped out acid dream and a lament to love:

“How dare you carry on
with your stupid life like we don’t belong
in our own brigade, camous and grenades
Sitting in the shade, drinking pink lemonade
Hardwood floors, cardboard box
All night long, hip-hop rocks!
MJ in the kitchen slide around your socks
I don’t know, the whole thing… stopped”

Concerned Odd Future fans reading this who think they’re going to hate Jet Age just might be right – this is definitely not an album for everybody. Experimentation is the order of the day, with samples that sound like they could come from Casio SK-1 keyboards, a game of Ms. Pac-Man, or a distorted keytar feeding back into an amplifier. Songs like “Sleep!” could be called the ANTI- Auto-Tune, being electronic without being harmoniously melodic. Before the Golf Wang posse goes into panic mode though, there are enough returns to form to keep Jet Age in the fold, such as Casey Veggies and Tyler appearing on “Welcome Home Son.”

Tyler: “Suck it up, cock it up, time is when the clock is up
Cause you don’t have to talk for us to chop it up (chop it up?)
Freezer burn, erection when I see you squirm
for me not to get inside your face, I’m the newest dermatologist
Blood on my shirt, no one acknowledged it
From teenage babes leaving dates I got to followin
Swallow it, clean it off, polish it
Axe you up in the back of my shack
Fuck some hollow tips
Throw you in my deep creek of self-esteem on some shallow shit”

Given those appearances are spaced fairly far apart in over an hour of music, “The Journey to the 5th Echelon” is still going to be a tough sell to both dedicated OF heads and casual listeners alike. That being said, and maybe because I got into OF a little later than the peers they are closest in age to, I’m not adamantly opposed to the experimental sounds and flows of Jet Age. If you’re into listening to Hodgy or Tyler rap about being loners, outsiders, weirdos and psychos then “5th Echelon” is not for you – you’re not going to hear enough of that to stay tuned in. On the other hand if you dig what Jet Age has to say about exploration of the mind in the opening paragraph of this review, from the opening track “Green Stars (Intro),” then this is your cup of tea – laced with LSD. The album’s a mind fuck – sometimes in a good way, sometimes not, but it’s far from a boring journey to take.