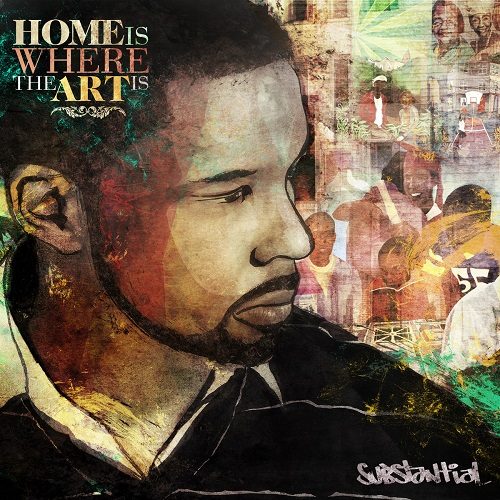 Substantial :: Home Is Where the Art Is

Over the past few years has there been any label that has been dropping quality albums as frequently as Mello Music Group? In 2012 the “other” MMG has already released critical darlings such as Oddisee’s “People Hear What They See” and O.C. and Apollo Brown’s “Trophies.” Well you can now add long-time QN5 affiliate, Substantial to the crew’s ever-growing impressive list of releases, with his third LP, “Home Is Where the Art Is.” MMG’s newest signee, who hails from Baltimore, fits right in with the crew with his technical proficiency over a fresh take of boom bap production.

“Home Is Where the Art Is,” which is inspired by Substantial’s hometown of Baltimore, is the rapper’s first full-length LP since 2008’s “Sacrifice,” which earned the rapper acclaim and airtime on MTV U. Those familiar with Substantial, know that rap fans will be hard pressed to find a rapper who’s as gifted technically, with flawless cadences and a seemingly infinite breath control. Think, Pharaohe Monch meets Black Thought, but with a baritone vocal delivery. The best example of his rhyming ability would be the aptly titled, “Mr. Consistent,” where Substantial executes some of the illest rhyme patterns I’ve heard in 2012.

Another example of Substantial’s best skills as a rapper is his unique take on braggadocio. “Mr. Consistent,” “Shit on My Lawn,” and lead single “Check My Resume” echo the same sentiments as his 2008 track, “That Damn Good,” which effortlessly combines battle raps and humor. “Check My Resume,” which is laced by MMG honcho, Oddisee, shows Stan’s skills to formulate battle raps focused on a specific topic; in this case he uses several occupational allusions to display how dope of an emcee he is.

Like nearly all MMG releases, “Where the Art Is” also has a perfect balance of more emotional and conscious tracks as well as the battle raps. Album opener and stand out cut, “Spilled Milk,” Stan raps about overcoming difficulties. On another Oddisee-laced track “Umoja,” Stan raps about his family: “Could’ve made a baby-mom out of you, but figured wife was better.” “Make Up Sex,” which features Deacon the Villain and Olivier Daysoul, is another track about his wife, and is an amusing and honest take on marriage. Substantial shows his more conscious side on stand out tracks “Make Believe” and “Resilient.”

At 12 tracks, “Where the Art Is” is easily Substantial’s most focused and seamless efforts in his catalog. With phenomenal production from Odd, M-Phazes, Algorythm, and others, and Stan’s effortless flow, this record is right up there with MMG’s top releases.

Substantial :: Home Is Where the Art Is
8Overall Score
Music8
Lyrics8.5