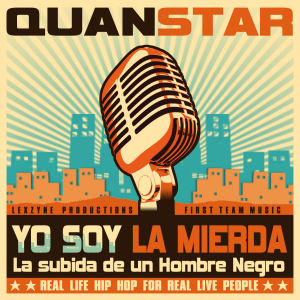 Quanstar is an Atlanta-based rapper whose resume includes ten albums, a documentary,a book, a cooking show he does with his kids (razingdough.blogspot.com), and a blog about indie hip-hop (indiehiphop101.info). You can’t knock Quanstar’s hustle or dedication to his craft. His latest album, titled “Yo Soy La Mierda: La Subida de un Hombre Negro” contains ten tracks of positive and independent hip-hop for your appreciation.

If my high school Spanish can be trusted, his album translates to “I Am the Shit: The Rise of a Black Man.” No one can accuse Quanstar of being overly humble. On album opener “Standing Ovation” he takes the opportunity to pat himself on the back.

The tag line below the title reads “Real life hip-hop for real live people,” which speaks to Quanstar’s main lyrical focus. He keeps it real, rapping about his struggles, his frustrations, his victories, and his faith in hip-hop as an art form and way of life. He raps about how central music is in his life on “Sunshine,” owns up to his own shortcomings on “Guilty Intentions,” and raps about life on the road in “Home Coming.” The latter song is a warts-and-all examination of the ups and downs of touring, and getting screwed over by shiesty promoters:

“Showing up at the spot
That’s really a restaurant
No stage, no setup
Wondering what is going on
Said he thought that we were bringing our stuff
Turntables mics and speakers gotta be all on us”

In terms of flow and delivery, Quanstar sounds inspired by “Reasonable Doubt” era Jay-Z, rapping with an unhurried and self-assured style. The 90s vibe is also present in the production. LexZyne offers up beats that split the difference between 90s East Coast and early 2000s Southern rap. The beef track “Big Mistake” has a stuttering beat that layers on scratches and guitar. The title track chops up bluesy R&B; “Do Dat” mixes echoing guitars with what sounds like the drum break from “Bust A Move,” and “Guilty Intentions” and “Home Coming flip soul samples to good effect.

The beats are decent and Quanstar’s lyrics are refreshingly honest. Where “Yo Soy La Mierda” falls apart for me is in his delivery. For one thing, the recording of the vocals sounds rough and amateurish. The bigger issue is that Quanstar’s voice is often either monotone or slightly off-key, which makes it hard to appreciate what he is laying down. In the end, while I admire Quanstar’s spirit, dedication, and hustle, the end result is less impressive.