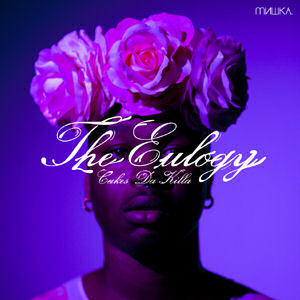 Cakes Da Killa was a recurring name in the recent wave of coverage of homosexual hip-hop artists. Coverage that insisted that labels like ‘queer rap’ don’t really do justice to the individual artists. And yet there’s no way you can talk about the New Jersey resident’s first full-length mixtape without making mention of his sexual orientation, simply because he projects a very sexualized image of himself.

If you’re familiar with rap music but maybe not that familiar with rap music from a same-sex perspective you still shouldn’t be surprised by Cakes’ choice of words. The only term worth discussing is ‘faggot,’ which, similarly to ‘nigga’ in rap in general, is sometimes used in an inclusive, but more often in a disparaging way. If Cakes wasn’t ostensibly gay, he’d get called out for several statements on “The Eulogy,” and even as it is some LGBT activists would surely have issues with his liberal use of the f word.

Parts of Cakes’ attitude can without a doubt be attributed to the subculture he also represents, but clearly rap has influenced his mic persona, the alpha leader who’s in control and in charge. And like for so many rappers before him, the cocktail of money and power proves to be a potent aphrodisiac:

“How many rappers even fuckin’ with my pen game?
16 cook ’em up like propane
Gettin’ mine all day watchin’ Soul Train
Blueprint, cunt bitch, I’m in my own lane
Flip the script, new shit, I’m in my own plane
Landed out in LA just to get brain
Seen a bitch in the flesh, went insane
My hand out, kiss the pinky on the mood ring
All that, da-da-da-dat
My canines got chin straps
I’m comin’ at you hard and nuttin’ on a nigga’ six-pack
Better keep that thing stacked and packed up like backpacks
Nigga you a goner, lay the burner to your snapback
If I’m in the spot you know I’m dubbin’ where the cash at
One-hitter-quitter, top figures, where ya stash at?
Cakey talk currency cause money, I’m about that”

Reminding us that he’s also Da Killa, Cakes indeed brandishes firearms to intimidate competition. (At one point he takes “shots to ligaments, got niggas limpin’ like Bambi.”) It’s more notable than objectionable, still when he uses the phrase “Boom bye bye” in the same context, you wonder how the title of one of the most infamously homophobic songs (by Buju Banton) can make its way into the music of a homosexual artist in such an unfortunate way.

It could be Cakes’ own fault, a consequence of his focus on fun and games while neglecting the heavier aspects of being a rapper. Early on he drops the brilliant line “I spit that shit that make a homophobe a hypocrite,” and it would be great if he could, but even greater would be if he could convince everybody, homos and no-homos, of his greater purpose as a rap artist.

Still there are high-profile comparisons to be drawn. There are tracks that recall the pop hop freakishness of Missy/Timbo and N*E*R*D/Neptunes, although equipped with a strict contemporary sheen. The flow on “Keep it Coochie” is reminiscent of Camp Lo, and in regards to the in-your-face sexuality one could run down a long list of prominent figures in hip-hop history, male and female. Cakes Da Killa’s greatest asset is his precise flow. It’s his pillar of confidence that carries the rest of the show. Stimulated by minimalistic but percussive beats, the vocals, who undergo only minor technical manipulation, never lose their clear diction, no matter the tempo or volume.

Tracks 1-3 may be the most interesting musically. “Get Right (Get Wet)” opens the album with a sped up Donna Summer rendition of “MacArthur Park,” only to dispel the idea that this rapper will dig up gay icons from yesteryear as producer Bitchy Blue abruptly switches to a bare, bleepy backing for Cakey to raise eyebrows for the first time. Shortly after a suggestive Nicki Minaj sample declares, “You can’t give it to ’em dry like that, you gotta get that shit wet first,” after which the track runs off with a bubbling bass. “Keep it Coochie,” produced by Poisonous Relationship, starts off with an odd combination of pianos and sirens, continues with synthesized organ stabs, at one time interrupted by an ill swing sample and eventually breaking down to an epilogue where the nervous hi-hats are countered by calming guitar-plucks. “Break ‘Em Off” ups the ante in terms of aggressiveness with a feature from Big Momma and a dubstepping beat courtesy of seedeeaaa, who also incorporates what can only be an Eightball sample. The song that sounds most like ‘vintage hip-hop’ is the closing “The Eulogy,” a soulful Wild Thought production to which Cakes flexes his lyrical skill:

“RÃ©my stretches got these bitches straight-edge-less
Throwin’ shots at Killa get a silly nigga headless
Ain’t one for the drama, cunt charms upon my necklace
Rap is like work, so I never need a check list
On my mind stay my dollars and my MEXX, bitch
Tryina live posh while you stylin’ like a peasant
On shopping sprees rockin’ boots made of pheasants
Niggas flock to my aura cause my flow is omnipresent
I fucked around and made my enemies a memory
Since I started rappin’ haters try to see the death of me
These niggas want the best of me, faggots can’t get next to me
my pots and my pants, tryina whip up my recipes
On stage, spotlight, no thespian
or in the corner gettin’ pissy with some lesbians
Smile up in my face, call me sis but you ain’t next akin
A lotta niggas fuck with me, I don’t really fuck with them”

That much is clear – Cakes Da Killa can rap and “The Eulogy” sounds a lot better than many of the amateur releases that inundate the internet these days. This is hip-hop as you know it, love it, hate it (depending on your exact preferences). The only difference is that the rapper openly talks about being attracted to men, or rather, as tradition demands, about men being attracted to him. Hetereosexual listeners might have some trouble decoding the language (e.g. the redefinition of terms typically reserved for female genitalia), like this reviewer can’t quite figure out if “Fuck Ya Boifriend” addresses a man or a woman.

To win respect for his craft rather than his courage Cakes Da Killa still has some way to go. Despite gems like “Bitch, I fear no equal” or “Caught him in the coupe blastin’ ‘Touch Me Tease Me’ / Put that shit on mute, nigga, fuck you, eat me,” the lyrical wit and wordplay can be taken up several notches. And there needs to be some actual depth musically and lyrically, especially when it’s alluded to as it is here. In short, this is not (yet) queer rap for the straight chap. Maybe that’s not the artist’s goal at all, but for rappers like Cakes to leave their niche behind garnering critical acclaim and popular demand should be in everybody’s interest.