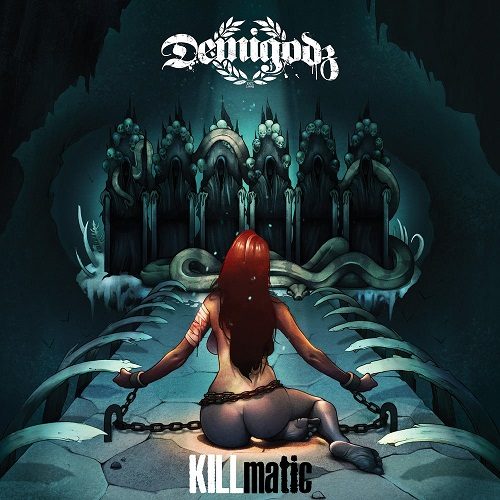 Apathy, Celph Titled, Ryu, Esoteric, Blacastan & Motive spend the first full track of “KILLmatic” explaining that the “Demigodz Is Back,” but that implies they ever went anywhere. As long as Apathy was around making rap albums, then the head of Voltron was always there, and he could call them up to form the body. Don’t get it twisted though – any one of the rappers in this supergroup has the capability to lead.Celph Titled for one shows his Presidential qualities right from the jump:

“Demigodz is back? Hey, that’s fuckin awesome!
I think I’m missin my marbles – I’m kinda glad I lost ’em
I see the deep end there – looks like you’re goin off it
And no you squares can’t fit inside my Oval Office
I’m goin golfing – except instead of that white ball
I’m teeing off your head then it’s lights off”

I can hear people crying already that Apathy sampled the Rocky theme for the track, but cliched or not, tell me you could think of a better way to give Demigodz a more epic re-introduction. I’d still argue that among dedicated hip-hop heads no introduction is needed, but outside of those same heads, no introduction will ever suffice. To say Demigodz are an underground phenomenon is an understatement much like saying “a SMALL ROCK from outer space hit Russia” last month. Speaking of Outerspace they are close affiliates of the Godz, so it should come as no surprise Planetary raps on “The Gospel According To…” though in this case it’s Esoteric who steals the show:

“I’m the sickest author, slicker talker, raging liquor locker
Lick a shot for all the shitty offers I turn into chicken fodder
Prim and proper bitches grip the cock and it’s shock
because it’s bigger than Chewbacca, Mount Olympus, it’s a monster…”

With a crew of talent this deep and so many producers lacing the beats, it might be more fair to say the show gets taken like a thief in the night every few minutes, repeatedly stolen and then stolen back. One minute you might think guest star Termanology is the man of the moment on the heavy Teddy Roxpin track “Never Take Me Out,” then all of a sudden Celph Titled tears shit up. (Love the Greg Nice samples on this one by the way – absolutely PERFECT.) Then one of hip-hop’s most underrated female emcees decides to body all the men with her cameo on “Can’t Fool Me,” a track Apathy produces and aptly describes as “the hardest record all year – mark my words.” I almost feel bad for Celph having to follow her when she spits bars like “I climb higher than the rapper you just smoked out to get on your song […] after a storm I’m that verbal hurricane, then I’m gone.”

On “KILLmatic” you could use the randomizer on your CD or MP3 player and land on something dope virtually every time. For example while bouncing around the album I instantly fell in love with Teddy Roxpin’s “Captain Caveman,” featuring the cartoon samples you’d expect along with a brutal cameo by one of rap’s most unfrozen emcees – R.A. the Rugged Man. His verse is so hilariously over-the-top I just know it’s going to offend somebody, but these punchlines are killer:

“Nubian sisters please stay away, you better watch out
I’m the caucasoid germ your daddy warned you about
Caveboy, cowboy, pistol in both holsters
I don’t just rape women, I rape whole countries, I rape cultures
It’s hard for me to be alive and stay righteous
I’m the guy that fucked the monkey and started the AIDS virus”

Another random skip lands me on “DGZ x NYGz” and for those in the know that means Panchi is the guest of this song, a Chumzilla track that sounds perfectly suited for Vinnie Paz. (Pazienza may be the only guest star who ISN’T on this album that I wish was.) Jumping again I hear the narrator saying “Hello! And welcome to the gutters of New York City,” which means it’s time for the sleazy 70’s sound of the Snowgoons produced “Summer of Sam.” Keep trying to find a bad track and you’ll have to give up and admit defeat – I bounced straight from here to the DJ Premier laced “Worst Nightmare.” Ryu is the show stealer here:

“A worst nightmare since my momma went into labor
No pushin, I just cut myself out with a razor
Ay! Do me a favor player, you know my name – say it
Even Wolf Gang call me the rap game’s Amadeus”

That was the point I had to just give up and admit Demigodz bodied this entire album. If you ever liked even one of the emcees on it you already have a reason, and if you know the Demigodz, you have no reason NOT to cop this album with the quickness.