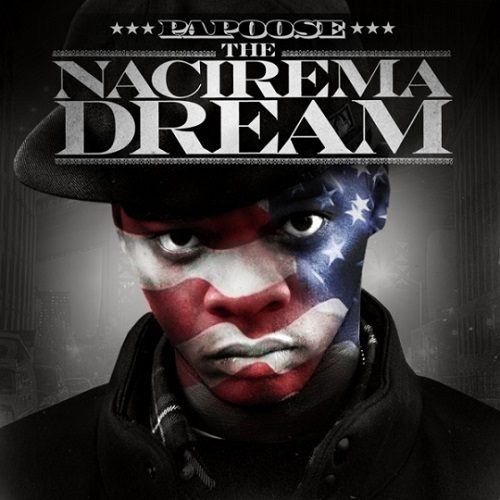 As far as mixtape rappers go, there are few bigger, or better than Papoose. Having signed a deal for $1.5 million to release an album on Jive Records back in 2006, “The Nacirema Dream” (American spelt backwards) has only just seen its release in 2013. We’ve been here with Saigon’s “The Greatest Story Never Told”, with Cormega’s “The Testament” and Bumpy Knuckles’ “Crazy Like a Foxxx”. Artists with a big buzz that just never capitalise on it, thanks to A&R bullshit, shifting musical landscapes or any number of factors. Many rappers release a different solo effort first, but Papoose went the mixtape route that had served him well in establishing a buzz in the first place. Hooking up with DJ Kay Slay helped Papoose get on a whole bunch of remixes to popular tracks, most significantly Busta Rhymes’ “Touch It”. My own experience with Papoose records is predominantly through lyrical experiments such as “Alphabetical Slaughter”, and although he is clearly adept at lyricism and understands the power of simile, he still remains a battle rapper that isn’t actually known for battling. There’s no doubting Papoose’s ability to outshine other rappers lyrically, but mixtapes and collaborations can often allow for rappers to flex their muscles over their pick of dope beats. “The Nacirema Dream” then, is a big deal because an album meant to be released in 2007 could already sound dated in 2013. Regardless of the fact it has been chopped and changed over the years, many mixtape/battle rappers find it hard to adapt to concepts and the cohesion an album requires.

After a bold “Intro”, Pap’ narrates a “Motion Picture” crime tale over a Dame Grease production that sounds more 1998 than 2013. Admittedly, Papoose is a supreme storyteller with a delivery akin to Big L. The problem with “Motion Picture” and a proportion of “The Nacirema Dream” is that the stories just aren’t interesting enough for a hip hop fan raised on the lifestyles of the poor and dangerous. There are plenty of noteworthy lines (“The Apple is nothing without me like Steve Jobs”) but the production isn’t as strong as it should be. “Cure” plays to Pap’s strengths, namely the ability to narrate a unique track where Papoose plays the role of the AIDS virus, describing his origins, his purpose and ways to avoid him. Assisted by Buckwild’s minimal backdrop and Erykah Badu’s hook, it truly feels like a concept worthy of a much-delayed album. “Pimpin’ Won’t Die” has Pap sounding reminiscent of 50 Cent, with a suitably swinging production from C4 that wouldn’t have gone amiss on a Fiddy record. Pap excels lyrically, essentially stating that nothing has changed in the ghettos of America since Tupac dropped “Brenda’s Got A Baby”:

“They say it’s 2 ways out of the ghetto
Either you rappin or you playin ball
I done heard people say it all
Those male dominating ways for a man to prevail
But what’s the exit for a young female?
Either you shippin or you go to school
Play dumb when you young and be a older fool
Know to choose, the older dudes try to school her every day
Her response was well, anyway
She rather take the ass titty way
They say human experience beats book knowledge every day
Somebody help this child, can we pray?
Cause she rather take human experience
She see them other prostitutes getting it, now she curious
She’s locked in the zone
With parts of her body getting sold
Ain’t listen to what the old timers told, call em old
The only thing worse than getting old
Is not getting old, the block’s getting cold”

“What’s My Name” is a strange song about cheating on your partner, being with them for money and everything else that shouldn’t make a relationship work. The fact Pap’s wife is on the track (Terror Squad’s Remy Martin) adds to the authenticity of the content, but raises some serious commitment issues between the two. “Turn It Up” is another track that doesn’t quite fulfil its potential, a DJ Premier beat with Papoose going in? Yes please. Unfortunately Premo gives Papoose a lifeless, repetitive beat that Bumpy Knuckles couldn’t energise. It’s a shame as the scratches are suitably dope and Pap’ drops some strong verses.

“The Nacerima Dream” is as strong as any of Papoose’s mixtapes, combining effective storytelling with displays of advanced lyricism is everything rap fans have come to expect from him. Much like fellow lyricists Canibus and Ras Kass, Papoose has been let down by some second-rate, mixtape-ish production. Whether it is a product of being stuck in mixtape territory for so long or having to work on a limited budget, “The Nacerima Dream” is neither dream nor nightmare. Whether you are a fan of Papoose or need convincing, you’ll find something on here that you’ll enjoy.