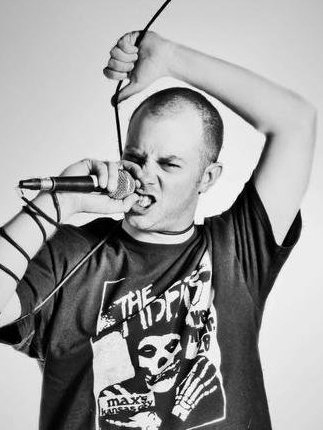 In Connecticut hip-hop circles Duece Bug is known for his raw style, and intense emotional performances. With the release of his latest album, Mantis, on Friday, May 31st, and subsequent tour with Bizarre of D12, the rest of the country is finally going to get to experience what has been, up until now, a local phenomenon.

When RapReviews sat down with Duece Bug he discussed why he feels Mantis is his most personal album to date. He also revealed how quickly he learned the harsh reality that success doesn’t happen overnight, what he has in common with magician David Blaine, and how bad weather turned out to be a good thing when Cappadonna was in town.

Adam Bernard: Let’s talk about Mantis. First of all, the imagery I’ve seen for it is stylized like a cult film movie poster. What was the thought process behind using that kind of artwork?

Duece Bug: The whole album is themed. There’s an old movie called Mantis in Lace, which is where we got the concept of the artwork from The movie’s called that because the praying mantis, the female eats the male when they have sex, and it’s a movie about a woman who has sex with guys and then kills them. I’ve had my fair share of women issues over time, and that contributed, comically, to the theme. Nothing depressing, or dramatic, it was just an interesting twist, and I really think the artwork looks really cool.

AB: How much of a change in your work do you think is easily apparent going from your previous releases to Mantis?

DB: The music that I have to work with, the beats that Kenny Kash put together for this, are far and beyond anything I’ve ever worked with for a project as a whole. That’s what comes to mind first. I was blessed with amazing music to write to, and to work with, and make songs with, on this record. I also feel I stepped my lyrics up from previous projects, mainly because this album is so personal, and so real, and really emotional, so it really brought a lot of inspired lyrics out of me in the writing process.

AB: What made you want to get more personal now?

DB: Because during the making of this album I’ve spent more time on it than anything in the past. Over the course of two years a lot has happened. I’m involved in so much, and I grind so hard, that I have to remain as professional as possible at all times, and not lose my cool, or my composure, so this album was a great way for me to kind of vent, and really get what I had inside of me out without being a jerk, or coming off as something that I’m not. Everybody goes through shit. Everybody has real life issues, on top of bills to pay, or their job, they might have kids, or they might deal with actual personal drama with relationships, or with family, and this was a great avenue for me to take to release all that emotion.

AB: You have some nice features on the album, including Wu-Tang’s Cappadonna, who you’ve also done shows with. How’d you end up linking up with him?

DB: I had done a track with Cappadonna after I met him probably three or four years ago. We had stayed in touch, and we tried to do shows in the past, but the logistics never really seemed to make sense to bring him out here. Finally he dropped his last album, Eyrth, Wynd, and Fyre, and he was on tour for it, and this time around it was a lot easier to get him. It was on an off day, and it was on a day we needed to fill for the tour, so we made it happen. He ended up needing to stay out here for a few days because there was a storm that canceled the next two dates of the tour, so he was in Bridgeport, in my hood, for like a good three days. We built in the studio, he did a lot of work for his own project, and we were able to do the track, and video, “Only Human,” for the album. He’s a really good dude for blessing us with that.

AB: What kind of advice has he given you?

DB: He really sharpened my sword. It wasn’t like a tutorial, or anything, but just hanging out with dude, and just hearing him tell stories, and hearing him talk about hip-hop, and the business side of things a little bit, how he feels where shit is at right now in the game, it’s just really inspiring to me, and the fact that he’s willing to sit there and really school somebody like me means so much to me. I really take those moments to heart. They mean a lot to me.

AB: What has been the toughest lesson you’ve had to learn?

DB: The toughest lesson for me is that this is a really long, hard, process, that tests whether you are really about it. I have been grinding for a long time. I don’t do it just for fun. As much as I love it, I do it for a living, and I do it to succeed, and I’m trying to get myself, and Connecticut, to a bigger and better place, and it doesn’t happen overnight. I’ve worked with a lot of people, and a lot of things have changed, relationships have changed, but I’ve maintained the same core, and the same unity, from Connecticut. It’s a long process, and it really tests you. When I first started out, the first show I ever played was in front of almost a thousand people at Toad’s Place (in New Haven, CT) opening up for Foxy Brown. After that night I thought I was gonna get signed the next day and be famous within the next week. Not that a great deal of awesome things haven’t happened since then. I’m so proud of where I’m at, and all the things that I’ve accomplished, but I still have a really long way to go, and that is the lesson in itself, and it will continue to be until I’m satisfied with where I’m at.

AB: The lifestyle of an independent musician can be very difficult. Do you remember a time when you felt beaten down by music?

DB: Yeah. Every time I’m close to finishing an album, like the last month or so before it’s pressed up, I’m so tired of listening to my own music. I go crazy over it. I’m obsessed with putting out quality music, and putting my all into it, whether it be on record, or a performance. A lot of people don’t know this, I throw up every time I get on stage. I literally leave everything out there. If I’m in the booth, or I’m rocking, I’m 100% dedicated to bringing it, and giving it my all.

AB: Wait, you don’t have a B. Rabbit moment where you’re vomiting before you freestyle, do you?

DB: No, it’s just because I literally can’t move for a good 15-20 minutes after I get off stage. I just have to sit there like a cripple and make funny noises and get my energy back. It’s like David Blaine after he levitates.

AB: What has been the greatest reward music has given you?

DB: The greatest reward is when people that I don’t know compliment me, especially when people say “I was having a bad day, and this song really made me feel better about shit,” or “I didn’t know this and you taught me this on this track,” or “I have a really shitty job and all week I’m just looking forward to coming out and rockin with Full Blast and having a great time.” Those are the things that really keep me doing this shit. If people are really loving it and supporting it and having a great time, that’s all I really care about, cuz that’s why I do this.

AB: It has been nearly three years since I first interviewed you. You were, I think, working on Fuck Duece Bug at the time. After seeing what you’ve accomplished over those three years, what do you hope to accomplish over the next three?

DB: One thing I’m setting out to do this summer, that I was determined to do, is tour. The way things worked out was great because the Mantis tour that I’m doing starting at the end of the week is with Bizarre of D12, so that’s gonna be awesome, and a great experience for me. Then we’re doing the Get This Work Tour, the Full Blast tour, in July. We’re going to Buffalo, Boston, and down south to a few states. That is something I had set out to do when the time was right, when it made sense, when we could do it right, and I’m really happy to be venturing out to do that. I also want to keep building a fan base. The more people that know about myself and Full Blast the better. As time goes by we accumulate the support, which we love so much, and appreciate from everybody. That’s the ultimate goal, to get heard. We have a lot to say, so the more people that are listening to, and vibing with, us, is better for us.