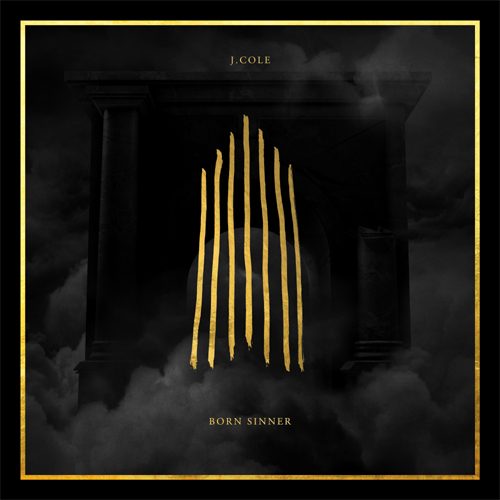 Oh, Hip Hop. We used to get classic social commentary; nowadays, it’s more like social network comments. There is no doubt that the art of making an album has taken a backseat over the last decade â€“ however, a few artists still take this shit seriously, and whilst tastes vary, we’ve certainly received excellent long plays from Kendrick Lamar and Drake, in particular. Following his somewhat bland debut “Cole World: The Sideline Story” J. Cole returns with his sophomore, lining up his release date to go toe-to-toe with Kanye West’s “Yeezus” (both albums are due to drop on June 18th). It’s fair to say that the limited advance offerings from either artist have failed to match the commercial might of the epic media takeover of West vs. 50 Cent back in 2007 (“Graduation” vs. “Curtis”). Since then, Kanye has gone from strength to strength, with 50 treating the rap game as a mere passing interest. Make no mistake: this little tÃªte-Ã -tÃªte is not in the same league.

J. Cole comes across as this decade’s version of The Game. They sound eerily similar at times; they both namedrop insecurely about legends/mentors; they both know how to put together a good album; both also seem convinced they are the new Tupac Shakur. Cole likes to produce his own music, whereas The Game knows how to get good beats for his budget; Cole is a touch better as an MC in certain respects; The Game at his peak was arguably more charismatic. But the common ground between them is clear. Cole has learnt from his bland debut album, and whilst it is a step in the right direction, can “Born Sinner” be considered a classic or even anywhere near 2006’s “Doctor’s Advocate” (which still bumps pretty damn hard)?

In almost every respect, J. Cole improves upon “Cole World” â€“ it’s ambitious, a more unified sound is present throughout, lyrically he’s spitting like the underground Cole that earned his following in the first place, and it’s certainly vastly less marketed (cynically) towards the females. “Born Sinner” as a theme is subtly identifiable throughout most of the songs, with references to preachers, Adam and Eve, liberal sprinklings of choirs and some well-balanced confessionals. However, literally six months ago, The Game dropped his album “Jesus Piece” which attempted to cover much of this too â€“ it even had a track WITH J. COLE called “Pray.” So it could have felt like we were retreading familiar ground. To his credit, Cole generally manages to personalise the sins into songs, and formulate them into a self-produced mid-90’s throwback joint that more or less works very well as a late night mood album to vibe out to, not to mention a headphones joint.

There is arguably a lack of big moments here, with few tracks that could turn into crossover events â€“ not commercial crossovers, as that plainly isn’t the aim here at all, but touchstones for the hip hop community to transmute into universal references. Yet it gets off to a great start, with the stirring “Villuminati” â€“ Cole really sets his stall out, stating that “It’s way darker this time” before the strings kick in, that famous Biggie line is sampled and the MC really goes at it. Following a telecommercial/sermon, “LAnd of the Snakes” has an “It Was Written” feel to it (actually sampling OutKast), and it’s very much a highlight after a few spins, as you get to know the artist through a combination of his detailed diary entries and clever couplets. The female-friendly “Power Trip” featuring leg chopper of the moment, Miguel, is a single that fits excellently within the structure of “Born Sinner” â€“ the last verse of the previous song leads cleverly into it, and it’s not by any means dumbed down. The superb interlude “Mo Money” (another peak) precedes “Trouble” â€“ and the religious overtones become even more obvious. Cole doesn’t explicitly preach about religion, instead favouring an approach where he assigns a sin to each song and explores it with a framework.

“Runaway” is one of the few tracks that genuinely has a Pac feel to it: it’s superlative. Just after lies “Rich Niggaz” â€“ almost on par, as he explores money and the various attachments, good and bad. Sandwiched between, “She Knows” is perhaps one of the few tracks that needs more than a few spins to earn a place â€“ even then, it is probably going to be a target, but it does lighten the mood musically a touch (before it gets dark pretty quickly). After a brief skit, Kendrick Lamar turns up on chorus duty for the intriguing “Forbidden Fruit” â€“ that familiar Ronnie Foster sample plucks away as the obvious biblical references pour forth. Along with “She Knows,” some may not take to “Chaining Day” that well: despite a sweet soul feel, and the obvious juxtaposition of judging the purchasing of jewelry over actual assets while being unable to stop wasting money on chains is fine, it’s overly long and a touch on the nose. A Timbaland-esque interlude follows â€“ “Ain’t That Some Shit” might not be up there with “Mo Money” but it adds some energy. One could imagine “Crooked Smile” receiving radio play: give the lad a big budget video, and radio would surely support this catchy and heartfelt TLC-featuring hit. It initially comes across a touch insincere (“Unpretty” + Tupac Positivity = Hit Hit Hit!!!) but the message is worth the saccharin.

The Seven Deadly Sins are frequent guests on the album: Lust, Gluttony and Greed permeate the first half; Wrath, Envy and Pride the second. Sloth may well refer to the interesting “Let Nas Down” â€“ again, particularly reminiscent of that brilliant “Doctor’s Advocate” title track. No I.D handles the track with his usual soulful aplomb, and Cole plays his part to add the interesting psychodrama, even if it does seem a touch deluded at times (“the Nas comparisons were coming true” â€“ really? We thought you were Jay-Z, oh wait, Pacâ€¦ Another clear Game-ism). The title track brings “Born Sinner” to a close, and it’s a strong offering with James Fauntleroy delivering a lush chorus, and once you’ve hit repeat â€“ which you will â€“ a sample of this chorus actually starts the album back off. The deluxe version has five cuts, which basically formed “Truly Yours 3” EP. But in this case, the album itself stands alone and deserves consideration without the additional bonus tracks muddying the waters.

For “Born Sinner” is a real grower, one that in many ways completely exceeds expectations and demands your attention. In fact, you just wish that “Cole World” never existed and this had, in fact, been his actual debut. It’s consistent, ambitious, and has an almost singular focus without the trappings of a traditional concept album. He states that the Devil led him astray from his musical goals on that debut, and this LP comes across as a big “Fuck You” to Roc Nation, one that favours principles over getting money. He clearly wants to do things on his terms, and whilst this isn’t an obvious classic, it comes pretty damn close: he certainly earns the respect of this reviewer. It’s cleverly sequenced, dense lyrically, conceptually committed. He can actually write a song, front to back, and even if at times he sounds (vocally) like he’s rapping within himself, this is a gigantic leap forward. The truth and principal difference between The Game and J. Cole is that the former is basically a goofy hip hop fan living out his “Dreams” â€“ whereas Cole has, and probably always will be, a talented underground rapper who just happened to get signed. The best thing Roc Nation can do is let him grow, do things himself and learn. Stop trying to fucking turn him into Drake, take commercial pressure off, and allow him to be a true artist. It’s a slow burn but “Born Sinner” could just be the start of something special. Could it have done with a couple of more guest production spots, and even just one big single? Perhaps, but the artist has created a unified vibe and the only thing holding it back from “classic status” is that absence of “water cooler songs” that, for example, Kendrick Lamar’s album had (and “Doctor’s Advocate”). The fear is that he’s intrinsically incapable of conjuring up such a moment himself, but that’s one of the very few deficiencies on display. “Born Sinner” is worth your time, money and though it suddenly makes June 18th interesting again, it is an album that will outlast a staged music industry shoot out.