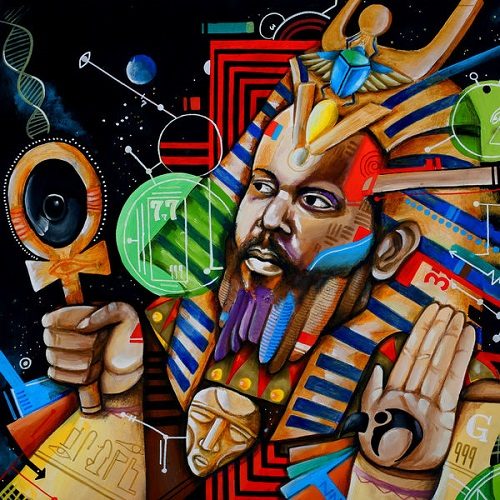 Ras G :: Back on the Planet

Ras G is closely associated with Flying Lotus and with good reason – the two have shared an apartment together and Ras’ is signed to FlyLo’s Brainfeeder record label. Much like kindred spirit Lotus, Ras G focuses on creating densely layered hip-hop influenced instrumentals. Unlike Flying Lotus, he doesn’t appear to have a rap alter ego – or at least not one which he’s alerted us to.

Seemingly random bleets, pops, blurts and industrial drill like whistles make up the melody of “OMMMMMM…” – a song so noisy I can’t imagine anybody actually meditating to it. That’s a quasi-random example, but it’s not hard to have a similar experience by hitting random shuffle on your player of choice before starting “Back on the Planet.” The occasions where the noises coalesce into pleasant background melody, such as “G Spot Connection,” tend to be more the exception than the rule. On even rarer occasions such as “Ancestral Data Bank” I would say Ras G succeeds in drawing a direct line between the drum beats of the African continent 600-700 years ago and the modern synthetic sounds of today.

The problem I have with “Back on the Planet” is that unlike Flying Lotus, Ras G doesn’t seem to have a strategy for how to transition from what you’d hear as bump music on [adult swim] to producing for himself and others to critical acclaim. I don’t deny the influences that I hear Ras G working with here, pulling from George Clinton, Sun Ra, the Bomb Squad and more to create an electronic mash-up for a modern ear. It may well be that Ras G is a genius – I think very few people could produce tracks like “Children of the Hapi” and “Asteroid Storm” as successfully as he does. I’d also argue few people should. It’s great to be brilliant, but the acid test for a consumer has to be “Can I enjoy listening to this more than once?” If you buy an expensive painting from a famous artist and it’s so hideous you can’t look at it, aren’t you a fool for not only wasting the money but having to pretend to like it to impress your boorish friends? “Back on the Planet” is obviously the sort of thing I’m supposed to laud, but it’s so full of itself that I’d rather hear Too $hort rap about bitches and hoes. To me this is just a lot of well produced but unenjoyable noise.