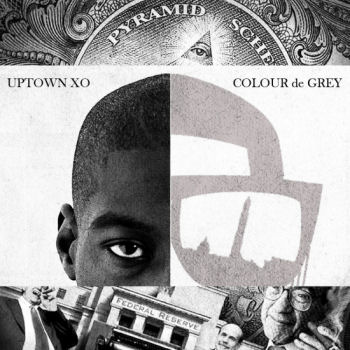 “Like Lao Tzu in Hiphop, Mello Music Group provides music for the soul, from the heart of American culture, opening the realm of the intelligent Hiphop experience through melodic evocations, beats that corroborate the truth, and voices that roar above the rising void and impose order on the terrible & triumphant moments of everyday life.”

That quote, adapted from a short story by James Baldwin, is the mission statement of Arizona label Mello Music Group. For the past few years, the label has established itself as an important voice in underground hip-hop, offering a carefully curated roster of artists. One of the cornerstones of the label is the Diamond District, the DC group made up of Oddisee, yU, and Uptown XO. While the Diamond District has only released one album, the group’s members have put out several essential releases. “Colour de Grey” is another solid entry by Uptown XO.

XO was always the brasher, flashier member of the Diamond District, the MC more drawn to street life. His 2009 mixtape “Monumental” was mostly about partying, and trying to cover up depression and pain by partying. In my review of that mixtape I said XO didn’t have the finesse of Wale (XO: Monumental). All I can say is, what a difference four years makes. Whatever strengths Wale showed on his “100 Miles and Running” and “Mixtape About Nothing” projects has mostly been squandered as he alternates between being corny and failed attempts at strip club rap. XO, on the other hand, has added an “Uptown” to his name and spent the last four years honing his craft. He still has some of his youthful brashness, but it is tempered with a maturity far beyond his age.

“Colour de Grey” is all about self-empowerment, self-improvement, and trying to escape the traps of poverty and crime before they destroy you. The title is a reference to how so much in life is neither black or white, but a shade of grey, and the interconnectedness and oneness of all things. That’s some heavy spiritual thought for a pop album, but XO sells it by keeping things real and deep rather than preachy.

On “Spread Love” he raps:

“Yesterday was on some street shit
Nothing outside of you controls what you do
And to claim what you declare, well that becomes a part of you
You are what you eat, we was fed the streets
Slave trade ingredients boats on the beach
[…]
Mention a big brand, we all go shopping
Blogs write about it, we all go cop it
[…]
Keep us getting stuck, let’s talk about it
Grew up in the hood so niggas want to get out
But they can’t cause the lifestyle has got us divided”

XO is backed by strong production by AB the Pro who provides soulful beats. They are more introspective than banging, which fits the lyrical subject matter. Highlights include the funky hook on “Finding My Way,” the stuttering beat on “If I Should Die,” and the dusty loop on “Evolution.” Occasionally things got a little too dramatic for my tastes, like on “XO Skeleton,” but for the most part the beats are a nice compliment for XO’s verses: equal parts gritty and serious.

“Colour de Grey” isn’t going to beat “Stay Trippy” as the (strip) club album of the year, but then that’s not what Uptown XO or Mello Music Group are all about. If you are looking for hip-hop that offers a more intelligent view of the streets that will make you think along with nodding your head, than this album is for you.