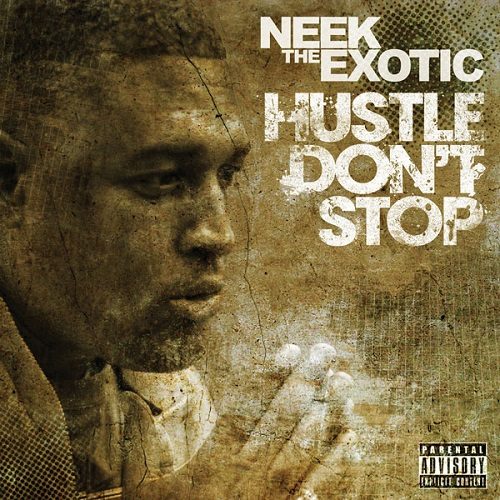 Neek the Exotic has always felt like a rich man’s Big Shug. Whilst Big Shug relied heavily on DJ Premier’s beats and scratches to get him through albums like “Who’s Hard” and “Street Champ”, Neek has always had Large Professor to lean on. Both Shug and Neek are products of early 90s, New York street rap and rarely veer from talk of money, hustling and supposedly “being real”, yet as far as rap skills go, they make Group Home sound like Black Star.

“Hustle Don’t Stop” isn’t quite as simplistic as some of Big Shug’s offerings, but it does see Neek provide some poor rhymes. It’s not just the drivel he spouts, but the awkward way it is delivered. It follows similarly weak efforts from the likes of NYC emcees Nutso and H. Stax, but given the album is scattered with songs shorter than three minutes long, there really isn’t much substance behind the standard boasts and brags. I don’t mind hearing an emcee constantly claim he’s the best if he does it in an entertaining manner. Unlike many, I can still enjoy a Canibus song because of the ridiculous vocabulary on display, or a song from Fat Joe will at least be provocative and tightly delivered. With Neek the Exotic, you really are working with scraps. He sounds delusional on “Boots Is Laced”, claiming to be a lyricist that uses metaphors, whereas the song “Hustle Don’t Stop” is formulaic – the hook actually sounds like an upstart wrote and delivered it. Even the constantly pissed off Bumpy Knuckles sounds disinterested on “Get the City Warm”, not so much jaded but just old. The song “Hustle Don’t Stop” is as generic as rap music gets, with Neek devoid of any connection to the listener. It’s soulless rapping at times, hypocritical at others. “Dream Catcher” sees Neek claim he “doesn’t give a fuck how much money you’ve got” yet “We Hot” sees him start the song with “get that dough baby”.

Production-wise, “Hustle Don’t Stop” does have some keepers. “Fuck the World” is a cosy track from Confidence, who also provides a dope posse cut for O.C. and Sadat X on “Hello Everybody”, and the addictive riffs on “Boots Is Laced”. Probably the strongest beat is The Architype’s “Street Life”, although there are striking resemblances to M.O.P.’s “Street Life” from their “Foundation” album – mainly in that they both have crap hooks. In fact, given the authentic aim of Neek the Exotic to provide a “real” rap record, there’s a distinct lack of DJs cutting up some classic emcees’ vocals. Probably the most surprising thing you’ll notice when looking at the tracklisting is that Satchel Page appears on TEN of the twenty songs. There must be a solid friendship there because he doesn’t steal any of Neek’s dim, dull “shine”.

If you really need a fix of hip hop with street sensibilities and rugged production, there are scores of better records released this year that are better rapped, better produced and actually deviate from the same-ol’ bullshit Neek and co are talking about. The hustle may not stop, but Neek should. There really is nothing here to recommend other than characterless, formulaic rap with no soul, flow or glimpse of Neek as a person. A shame.