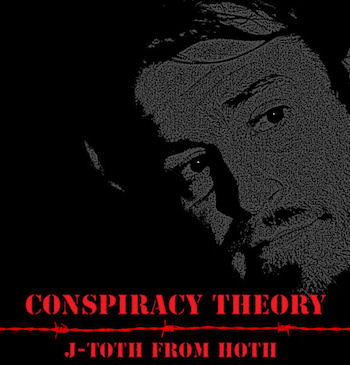 St. Louis based rapper J-Toth From Hoth lives by the mantra “Creativity first, cash second… the means justifies the ends.” As you might expect this makes him a ruggedly independent artist to the degree his albums are not easily available in brick and mortar outlets. You can buy them directly from The Frozen Food Section label though, or get his latest project “Conspiracy Theory” for $8 (or more) via Bandcamp. He’s been around since 2002, but my exposure to him increased when he dropped the single “Ghostwhirl” in 2005 with a cameo verse from MF DOOM – the remix in particular looping an ear-catching sample from “House of the Rising Sun.”

Toth resides in self-imposed obscurity due to his uncompromising artistic integrity and lyrical style, but his profile got a small boost this year thanks to Grip Grand. While Toth’s verse wasn’t part of Grand’s “Jive Turkeys” pastiche, it wasn’t too hard to connect the dots and realize the DOOM lyric GG remixed came from Toth’s song. Between this and other references to him on RapReviews we wound up with a copy of “Conspiracy Theory” on both vinyl and CD. It seems Toth is to some degree coming out of his mainstream exile.

“It’s Karl Rove – a/k/a, the lynchpin!
I’ll be here last, atop this pile of cash
No one can fuck with my ass
I don’t speak fake peanuts
I’m talking gold bars that float fast
It’s just not new to me
I’m swimming with the fishes, but they’re all new to me
like sushi – and I’m gonna eat!!”

If the title “Conspiracy Theory” didn’t already give you the idea, the lyrical and audible snippets above should. Toth is unrepentantly unapologetically anti-government, and views the big players like Rove with a highly suspicious eye. “Rove” is written as though he were the former Dubya confidant himself, bragging “I’ve got a wetsuit made of diplomatic immunity/don’t hate – congratulate American ingenuity! Winning at any and all costs.” The Splitface produced track is as harrowing as Toth’s vocal tone – he spits like a chimney stack at a coal factory. Put another way he sounds like he had throat cancer at some point in his life. He’s like Vinnie Paz meets R.A. the Rugged Man. I can’t overstate this – Toth is a GRITTY rapper. A lot of it is wrapped in humor though, such as “Boris the Emcee” on the “KGB Outro,” which I suspect is just a Toth alter ego.

The self-produced “Questioning Integrity (banks)” is one of the album’s strongest cuts. Toth’s crushed gravel vocal tone is less apparent when he raps at a faster pace, and the banging at the South end of the ivories sets him up perfectly for lines like “Danger! Those guys hold a lot of anger!” He’s referring to the sense of entitlement of bankers and Washington fatcats, drawing a direct line from there to 9/11 terrorism. If you’re not familiar with conspiracy theories on the subject this may seem totally ludicrous, but if you listen to The Coup or Immortal Technique it’s not so far fetched.

Toth certainly sticks to his chosen topic on “Conspiracy Theory.” The ideas he espouses may seem far fetched, and one wonders if he even believes all of them, or just mined the bookstore and the Google search for every crackpot (or not) idea out there. Did the Secret Service let JFK be killed? “Hold On (et tu brutes)” ponders it. “Run Your Mouth” implies nothing you see on TV is true. “Watch FOX, why? It’s all lies. Every pundit is an agent – they’re all spies.” No one escapes the aim of his lyrical scope. President Obama gets attacked on the audio collage “Head of the State (obamanation),” with the audio samples implying our government’s monetary policy is little more than one big Ponzi scheme. And if you’re not a fan of paying income tax, “Conflict of Interest” featuring Victa Newman is right up your alley.

At any point where the weight of these massive conspiracies could get to heavy to bear, J-Toth injects a song like “Winning (with sheen)” to lighten the mood and happily chirps “I’m full of shit!” Perhaps. It’s probably more scary to imagine that he’s not and that any (or even all) of the notions espoused on “Conspiracy Theory” are true. The recently revealed inner workings of the NSA due suggest that only a blind man/woman should place full faith and confidence in the United States government to do the right thing and act in our own interest. I don’t believe “Bush blew up the Towers” nor that our own government assassinated John F. Kennedy, but I do believe a healthy skepticism about our political leaders should be the cornerstone of democracy. J-Toth exercises his freedom of speech to the fullest here, and though his grimy vocals are not for all, he’s making points over dope beats and not just rambling about conspicuous consumption and boozy one night stands. That earns him my full respect.