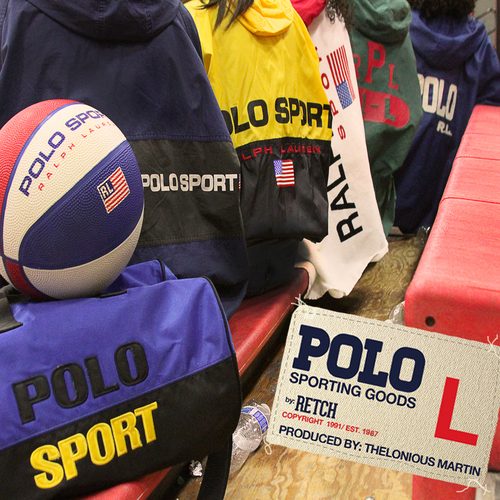 A few months ago, Action Bronson dropped his Party Supplies-produced and highly lauded “Blue Chips 2.” One of the project’s songs, “Flip Ya” — a track that masterfully samples Junior Walker’s rendition of “Wishing On A Star.” Overall, the song is a bit too short for my liking but it works. Following Action’s verse that somehow manages to tie together driving gloves, Vanna White and a shihzu, another voice enters the stage. That voice is one of Retchy P the Lo God, or just Retch for short. He spit a verse that took him to a Yiddish luncheon, finds him hosting a party and having Steve Harvey (of all people) escorted out for stunting too hard. Hilariously dope stuff. On the heels of the buzz generated by that appearance, Retchy P dropped his latest mixtape entitled “Polo Sporting Goods.” There has been a trend as of late among artists of recording entire projects with a single producer and I’m highly in favor of it. I feel like it brings a certain sense of cohesiveness to things. On “Polo Sporting Goods,” Retchy has teamed up with Thelonius (not to be confused with Terrace) Martin for eleven gritty and grimey tracks.

As is such, it’s only right that things open up with “Graceful Jewelry Removal,” a frantic tour through the streets where sights like dice games, drug use and bodies being dumped into the Hudson River are not an uncommon occurrence. “Marmalade Sky” combines drug dealing with a tale of espionage that would make James Bond jealous. Retchy’s ziplining through windows, planting bombs, dropping elbows to the face, evading the cops and getting away scot free in the end. “Burgundy Windbreaker” is more of the same but this time Retchy finds himself in pursuit of some stolen diamonds aboard a ship with its sights set on the Cayman Islands. Of course the Lo God prevails in the end, tossing his enemy off the side of the ship and making him fish food. One of the early highlights of the project is the Roy Ayers-sampling “Pimp Sport,” as the Lo God raps:

“I’m like Fresh, playing chess with my father
Hit the barber
Get the taper
Hit the block, go to Shakers
Make a hundred
Hit the steps, we gettin’ blunted
Shorty faded
Puss was great so I ate it
On the counter
Shimmy in and slide up out her
Reciting lyrics in the shower
I want the power”

TDE’s Ab-Soul is a featured guest on the psychedelic slow roller “Short $ermons” and Retchy goes for the heartstrings with “Special Jim,” the story of a paraplegic kid that the Lo God has taken a shine to. His dad died in a car crash and his mom is “sucking the glass dick.” Even though Retch is selling work to Jim’s uncle, he’s there to cheer him on during the Special Olympics and console him with encouraging words and ice cream when he comes in fourth place. While Rick Ross has “Aston Martin Music,” P has “850 Music” and he’s brought his old buddy Action Bronson along for the ride as the duo cruise in the lap of luxury. The affair comes to a close with “Paul Allen’s Business Card” and “Blue Fin Tuna,” but not before Retchy spits some of his most aggressive and braggadocios bars on “Since My Dog Died” as he raps:

“I been don, I’m King Kong with a mink on
I’m double parked, inhaling sess with the blinks on
I smoke the purple hues, I suffocate myself with herbal fumes
I crack a brew, the other side of Earth in June
We locketh eyes, the gaze created an odd shine
The crescent moon hovered gently over the skyline
I fine dine
With mai tais & ban chan
The dipping sauce is Polynesian, lemon season
In summer breezes it’s Polo chinos without the creases
Uncharted beaches, exotic features on foreign pieces
I beat the body, the verdict was read: insanity
Then showed up to your fuckin pool party on a manatee”

For the majority of people, “Polo Sporting Goods” will be either their first or second exposure to Retchy P and for the most part he holds his own. While perhaps not quite doing it to the extent of the Lo Lifes, it’s evident just from the vintage shit on the project’s cover that P is a big Lo head. On the musical side, the tandem of Retchy and Thelonious Martin work well to bring out some of that jux-with-the-rusty-screwdriver music that the game has been missing for awhile. Timing is everything and Retchy feels that his time is now. “Polo Sporting Goods” could be the start of something major for the kid and if it is, he’s going to need a bigger closet.