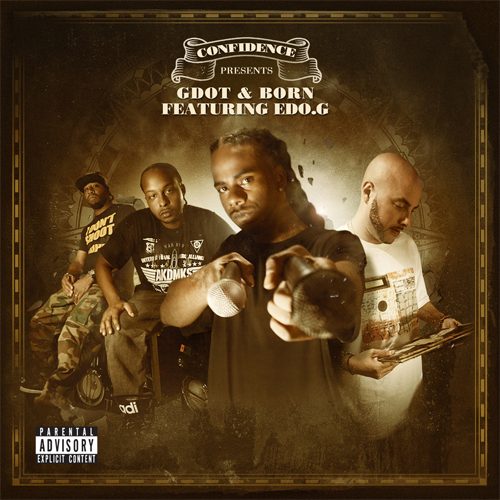 It’s not often an album gets released without a name. The last example I can think of goes back to 2004’s release of “Outerspace” which was confusingly billed as “Jedi Mind Tricks presents… Outerspace”. Jedi Mind Tricks weren’t on the album, but they used the JMT name to clarify to fans of underground hip hop that Outerspace were on that gritty, scientific flex on what was essentially a compilation album released to prepare fans for their label debut. What we have here with “GDot & Born” is actually “Confidence Presents… GDot & Born” – except Confidence isn’t actually that well known and IS involved in this project (producing each instrumental). To add to the confusion, legendary Boston emcee Edo. G assumes control halfway through the album. So with Edo. G’s revered status, it’s baffling that this record wasn’t titled “Edo. G presents… GDot & Born” with Confidence taking a backseat. This is an incredibly pedantic start to an album review, but it strikes me as odd. I’m a huge fan of Confidence, having enjoyed his previous albums alongside Tragic Allies’ emcee Purpose (“Purpose of Confidence”) and the outstanding collaboration with Rashad (“The Element of Surprise”). Maybe Confidence just lived up to his namesake and had the balls to put his name on the album cover after being billed as one half of his last two projects. Fair play to him, and when he continues to lace infectious, instantly accessible pieces of throwback hip hop, he could have named this shit “Confidence Presents… Confidence” for all I care.

So what exactly is a “GDot & Born”? Well, they are two up and coming emcees that have had Edo G’s blessing. GDot has a faster, rather scruffy style that relies on multis (Rakim style multiple rhymes in his bars), while Born has a more natural, easy on the ear flow. They are good emcees but alas, nothing special. Nevertheless, they bless songs like “Class Is In Session” (a song not unlike much of KRS-One’s late 90s work) and the irresistible “Makin’ Tracks”. Naysayers may disregard songs like this as DJ Premier imitations that could make any emcee sound half-decent, but if you’re going to mimic anybody’s style it may as well be the GOAT’s right? Thematically, the song is as generic as they come but boasts a brilliant Guru sample on the hook (â€˜as the world revolves, wack crews lick my balls’). The album closes with a remix of “Makin’ Tracks” that helps the emcees flourish a tad more, and shows that Confidence’s formula is more flexible than you’d think. Where Apollo Brown has sometimes been criticised for sounding samey, Confidence seems to switch up his technique more often than you’d suspect.

One song that stands out on this record is the superb ode to Pete Rock, suitably named “Living Legend”. There have been tributes to Pete Rock before, but the subtle pianos and horns that Confidence throws in between that trademark crashing drum loop, coupled with the return of Grap Luva and Rob-O (and a tasteful video) helps lend a mature edge to the record that other throwback albums from groups like Epidemic may lack at times. Track 10 through to 18 is essentially a mini-LP (EP?) from Edo G. Edo has generally been blessed by excellent production in his recent work, dating back to the near-classic “My Own Worst Enemy” which was produced by that guy… what was his name? Chocolate Boy Wonder or something. The former leader of Da Bulldogs applies his poignant, thoughtful style of one-liners to some sublime beats; “Tuff Talk” is simply immense and the ironically spelt “Grammer’s Strong” thumps as hard as Edo’s gem “Sayin’ Somethin'”. After last year’s disappointing “Intelligence & Ignorance”, it’s good to hear Edo can still hold his own with the younger guys when given beats he deserves.

The unsung hero of “Confidence Presents… GDot & Born” is undeniably DJ Technic, seeing as each track boasts scratched hooks (bar “Lock and Load”) yet his work never feels overdone. Meanwhile, as great as Confidence’s performance is, there is the odd track that fails to stand out amongst the constant slew of neck-breakers. “It’s Real” boasts not only the most played out song name in the history of this beautiful genre (along with anything to do with grinding or hustling) but suffers from production that’s unremarkable. There are also some dreaded skits (called “Interludes” here) featuring your typical bashing of mainstream hip hop, which could have been done without.

This style of hip hop is said to be dead and buried, a form of boom bap that can come across as cookie-cutter and ultimately hollow. While there are albums that do feel like that (Neek the Exotic’s “Hustle Don’t Stop”, which happened to be largely produced by Confidence), GDot & Born do complement the instrumentals nicely. There aren’t really any moments where either emcee “kills” a track, or even drops a great verse – but sometimes you don’t need to. Smif-n-Wessun’s “Dah Shinin'” wasn’t great lyrically and nor was The Artifacts’ “Between A Rock And A Hard Place” (cue a flood of hate mail), but they are great examples of hip hop just being hip hop. Dope beats are most certainly present here, yet despite the rhymes not quite matching them, this is still a combination worth listening to, particularly if you want to hear a producer who is clearly at the peak of his powers. This album is hip hop at its purest – with beats sampled from the MPC and emcees that hark back to the no-frills mould of twenty years ago – you won’t find many more satisfying albums this year, whether they have a name or not.